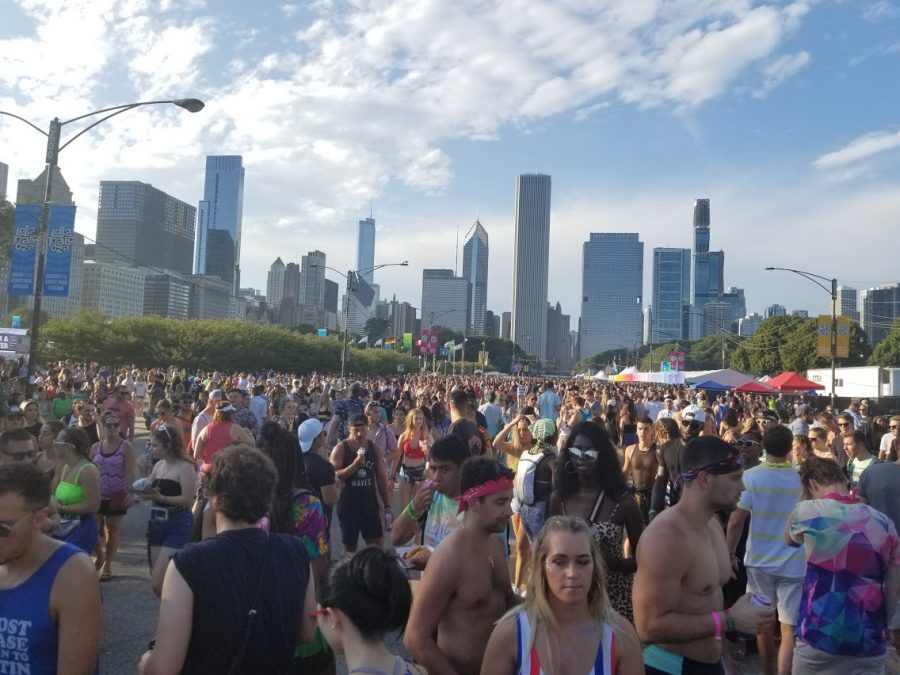 Festival-goers crowd the streets at Lollapalooza on Saturday, August 3, 2019, in Chicago.

OK, OK, wait — before anyone asks: No, I never went to any music festivals prior to this summer. Yes, I’d somehow lived 21 long years and never once considered going to Lollapalooza.

It never appealed to me. Thousands of teenagers in a pit, every single one dripping with sweat. I’d always imagined Lolla to be something like this: The girl next to you just yakked, a boy in front of you clocked another kid in the temple and some dude way up front is clearly rolling a bit too hard.

So, as one does, I yeeted caution to the wind and attended all four days of Lolla.

Here’s a great way to sum up my day one in a tweet: Naperville kids.

From the tweet: “High schoolers from Naperville begin their takeover of Chicago tomorrow. Everyone please proceed with caution. It’s best to not even make eye contact when you come across them. They typically travel in large packs and more than likely look something like this.”

Right below the text, a photo of seven white males. They have their basketball jerseys on, their white Nike Elite socks stretched up and their hats on backwards. These are the type of trust fund jocks who would definitely try to fight you for trash-talking Logic.

Disclaimer: I am from Naperville. The stigma holds true. To all other rational Lollapalooza attendees who had to deal with these kids: I’m genuinely sorry.

Despite hearing so much about how the festival’s dying, or how this year’s headliners suck eggs, Grant Park did its best to look thoroughly packed on day one. Seas of festival goers flooded much of Columbus Drive during prime hours, and it only worsened in the hour or so before the headliners played.

Thursday was a bit of a Lollapalooza culture shock, but the performances definitely came through. Saba was a breath of fresh air, giving an energetic performance. The set wasn’t a full-on rage, as you can’t really pit Saba’s music against the riots Denzel Curry or Sheck Wes spark, and that was a good thing.

And then The Strokes. Moshing to “Reptilia” and “Last Nite” proved to be one for the books. Easily the best act of the day.

In perhaps the most painful decision of my life, I chose to see Childish Gambino over Tame Impala. Considering the fact Glover will soon be retiring the Gambino moniker, I had to. I couldn’t miss out on one of his last performances ever. Tame can wait for another day.

I 100% stand by my decision. Gambino did not disappoint.

I’d just gotten done wolfing down two sliders I bought for a price I believe is a crime against humanity, and I promptly headed south from Buckingham Fountain. Considering most people were heading to Tame Impala for Friday, silly me thought Gambino wouldn’t be that crowded. I was very wrong. In a game of the floor is lava, except the lava is people instead,  I maneuvered my way as close as possible to the stage.

I’m going to be completely honest: I don’t think my jaw has ever dropped until I saw — scratch that, experienced — the legend that is Childish Gambino. This is coming from a guy who witnessed The Strokes rock out the night before.

In what felt like the start of a movie, the dual Jumbotrons at the T-Mobile stage lit up and projected Gambino as he walked down the stage and into the crowd. Film grain and a grayscale filter added an intimate flair to the camerawork.

The frame of the shot was glorious; you could see the Chicago night skyline in the background and Glover’s glorious, shirtless back in the foreground. In the middle of everything, a sea of fans yelled, recorded and waved at Jesus without a shirt as he walked by. In all seriousness, Gambino’s set should be considered for an Oscar, given how unreal the production value was.

But it was so much more than fancy camera work and good choreography. Gambino interacted with the crowd on so many levels. In one moment, he’s snatching phones and taking the selfies of a lifetime with portions of the crowd. In the next, he’s licking his finger, touching his nipple with it and pulling it away because it’s sizzling hot — yeah, Gambino is hot. There, I said it.

“IV. Sweatpants,” “V. 3005,” “This Is America,” “Sober” and, of course, “Redbone” comprised the last five songs of the set, and these otherworldly performances had me in tears. Shirtless Jesus took us all to church, and it was a journey. I can die happy.

There will be one day where you feel dead inside. For me, that was Saturday.

There was a time when I was young and restless. I was still sane back then. Still wide-eyed and ready for another day of Lollapalooza. My itinerary for the day looked a little like this.

Arrive half past noon. Snag the restock of Childish Gambino’s Lolla-exclusive “Because the Internet” shirt. Maybe have a few drinks. Catch Men I Trust at 1:45 p.m., then Mondo Cozmo at 2:45. Leave early to get close for Smino at 4. Mosh during Weezy’s set at 6:45. Meet up with a friend at Cindy’s for a bit after. Come back and close out with Madeon for the night. Be back the next day.

In reality, I went to two sets: Men I Trust and Smino. I got some water in between, and then I promptly gave up on almost everything else. My feet felt like stone slabs. Sweat drenched much of my shirt. It was near 90 degrees, and fatigue had set in.

The new itinerary?  Do nothing. I sat under a tree, a little secluded enough to avoid the waves of stumbling teenagers, but also close enough to hear some music. With a few snacks and enough water to last a while, I felt at peace.

I ended up leaving early that night, mostly for the sake of health. But part of me wishes I’d stayed; even though I didn’t have much interest in seeing J. Balvin or Twenty One Pilots, Madeon went nuts with his new stuff, complete with some stellar visuals. But the much-needed rest that night prepared me for the last day.

I moshed up front for J.I.D., bawled my eyes out at Joji, took it easy during Denzel Curry and got my yee-haw on at Kacey Musgraves.

Flume was different. I went in wholeheartedly expecting the kind of visuals Madeon put on for his show the night before, only amplified to the max. But Flume traded a substantial amount of pretty lights for newer, more experimental visuals.

He smashed printers to bits with a sledgehammer, randomly potted plants and even brought out Chicago Tai Chi for some interesting backup dancing. It certainly was different, but something felt a bit off. At points, it didn’t feel like a concert.

As for all the classics — “Sleepless,” his remixes of “You and Me” and “Tennis Court” — these tracks never disappoint. And his remix of “Is It Cold In The Water,” a drum-heavy, earthshaking EDM banger, undoubtedly remains the best use of visuals and lights in the entire set.

“Rushing Back,” a new, unreleased track with Vera Blue, single-handedly took the prize for best song I’ve never heard before at Lollapalooza. The melody and chorus reminded me of the same irresistible headbanging that ensued when I first heard “Never Be Like You.” The day this track drops is the day I’m buying Flume tickets.

The worst part about Lolla was … nothing. Everything looks pretty janky and filthy, you’re hungry and thirsty, and you’ll probably get some pretty gnarly blisters. But that’s part of the experience. For the most part, teenagers seem to know what’s in store for them each year. And they go without hesitation. Even though each day remains more or less a wasteland, it sure looks like people prefer it that way.

I overslept the next day. I showed up late to work. I couldn’t really concentrate that well, given how much transpired over the last four days. It was a wild ride, to say the least.