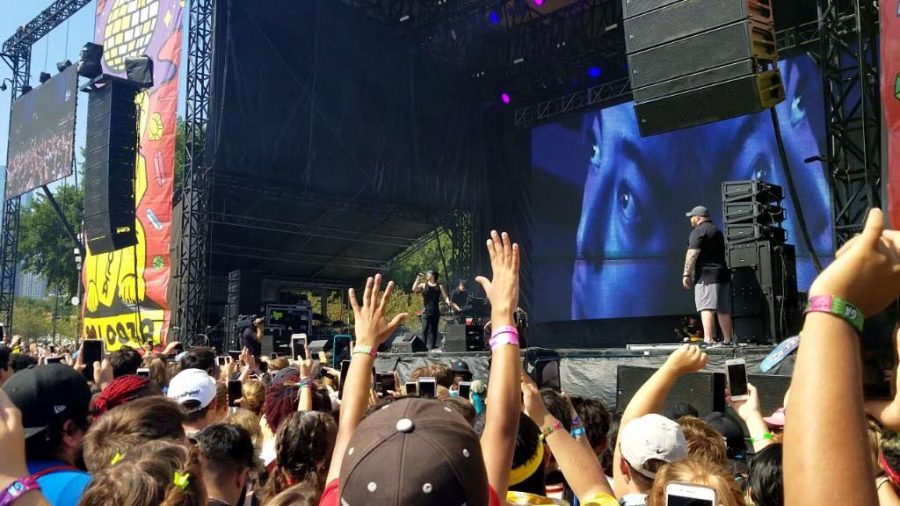 Joji performs during Lollapalooza on Aug. 4. A former internet personality, the 26-year-old recently reached platinum for his hit single, “SLOW DANCING IN THE DARK.”

It’s nearly 90 degrees outside, and the sky couldn’t be clearer on the last day of Lollapalooza. Across the field behind me, I see a massive crowd at the T-Mobile stage going crazy for JID. To my left, I hear a crazy EDM drop building up in the distance — there’s no doubt it’s Perry’s.

One thing remains abundantly clear to me: On day four, attendees go hard.

Except for the sea of people crowding around Lake Shore. I’m talking thousands and thousands of people. “I can’t wait to be sad,” exclaimed another Lollapalooza attendee, minutes before the set started. I could only agree.

Four letters appear on the stage’s screen. The crowd erupts, and George Miller, now known as Joji, walks out. “What the f— is up Lollapalooza,” screamed the 26-year-old, Osaka-born singer.

Considering how heavy and cathartic his music is, it was surprising to see him in such an upbeat mood. Joji periodically emphasized the importance of water in between songs, and he admitted “A Thousand Miles” is too gangster of a song to perform. He even danced and tumbled around the stage randomly throughout the set.

But given how long Miller’s been in the public eye, there’s surprisingly little we know about him.

On his now-defunct YouTube channel, Miller parodied the worst parts of the internet, he himself calling it the “embodiment of everything a person should not be.“ Across all three of his channels, Miller accrued over 9.3 million combined subscribers and over 1.3 billion total views. He’s responsible for the Harlem Shake, arguably one of the most viral internet dances ever, which immediately gained massive traction in 2013. And even while rapping and producing as a living meme, he somehow managed to top the iTunes charts in 2017.

That same year, however, Miller released a statement. Citing serious health issues and a lack of enjoyment in creating videos, he ended his YouTube career.

“The decision is final,” he wrote.

Unsurprisingly, many die-hard fans of his channel — and trolls, in general — didn’t see eye to eye.

This isn’t the first time Miller has opened up, however. In 2014, Miller uploaded a now-deleted video addressing his health issues. This also marked the first time he intentionally broke character; no gags, no jokes, nothing.

“I see you guys haven’t changed one bit at all,” he said in the video, commenting on his own characters’ volatile demeanors.

Nearly six years later, what he said still holds true — only this time, it’s directed at a different audience.

I’ve always wondered what he’d say in response, given the chance. Even when it’s brought up in interviews, Miller doesn’t directly comment on it.

For now, perhaps the most concrete response we have is on “ATTENTION,” the first track off of “BALLADS 1.” There’s a line that stands out like a sore thumb. It’s a sentence hearkening back to Joji’s past, not as an artist but as the viral internet sensation he used to be.

With a heavily-distorted, booming 808 bass drop — so much it almost drowns out his voice — Joji sings, quietly: “I thought I’d vocalize my troubles, but nobody will listen.”