Escape the rainy weather on campus with ‘The Umbrellas of Cherbourg’ 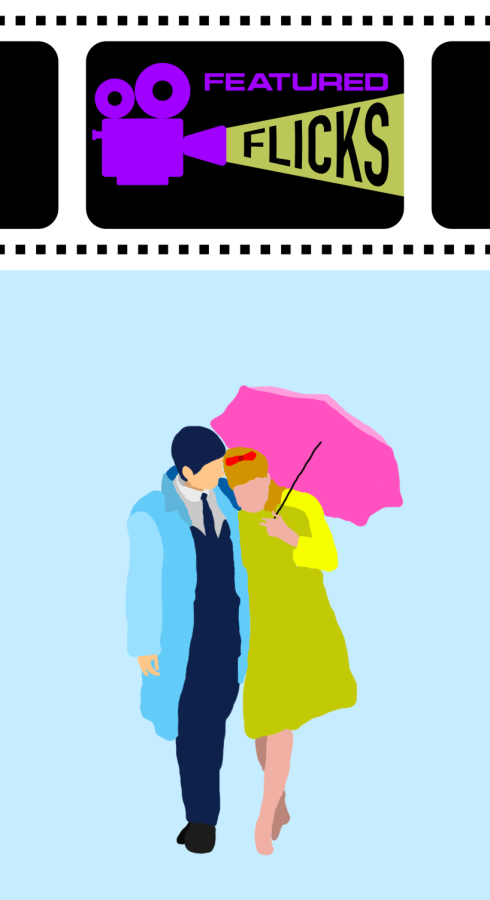 As the rainy fall weather continues in Champaign-Urbana, nothing sounds like a better escape than traveling to sparkling France in the ’50s. Jacques Demy’s 1964 musical, “The Umbrellas of Cherbourg,” provides exactly that as it takes viewers on a trip into the colorful, romantic world found on the streets of Cherbourg.

The film was written and directed by Demy with music and lyrics by Michel Legrand. Demy was known as an iconic director in the French New Wave with his contemporary films at the time. The musical was the film debut for Demy’s muse, Catherine Deneuve, who would later become a huge star in French cinema.

“The Umbrellas of Cherbourg” tells the story of the daughter of an umbrella saleswoman in France. Genevieve, played by Deneuve, falls in love with an automobile mechanic, Guy. The two keep their love a secret as Genevieve’s mother disapproves of the match. Guy is drafted into the army for two years, leaving Genevieve alone in Cherbourg. Feeling abandoned, Genevieve is forced into a match by her mother with another man, much wealthier and more highly esteemed than Guy. The three-act story recounts the bittersweet love affair between Guy and Genevieve in a completely sung-through style.

The film won the Palme d’Or at the 1964 Cannes Film Festival as well as being nominated for five Academy Awards. Though it didn’t take home any Oscars, it had a lasting impact on the musical genre of film. The film has been a known influence for other famous works, such as Damien Chazelle’s 2016 musical, “La La Land.”

Part of the uniqueness of the film comes from the entirety of the dialogue being sung with almost no strictly spoken word. While the choice is striking initially, the singing becomes much more natural as the plot progresses. Though it is not seemingly noticeable, most of the actors’ singing was dubbed or lip-synced with the voices of other trained singers. The musical motifs within the score add to the bittersweet story and create depth in the characters’ arcs.

Because the whole film is sung-through, it does make it difficult to stay engaged as some of the phrasing and music can get repetitive. The relationship between Guy and Genevieve isn’t lived in for very long, yet the progression of their circumstances makes up for the lack of exposition. The film takes a turn that feels unexpected from the beginning yet is naturally incorporated into the already established story.

The cinematography was done by Jean Rabier and beautifully paints France as a scenic dream world, perfect for two lovers to reconnect. Between the costuming and the exotic wallpapers, the film is an array of bright, vibrant colors that make it so delectable, like a pastel candy store. The color palette is a rainbow of fabrics and sunsets that create a fantasy realm, making France seem like the perfect spot to be. The sugarcoated setting creates a cheerful exterior that leaves the audience unprepared for the heartache it hides beneath the surface.

The musical is an enjoyable watch for anyone looking for a break from the University’s Midwest location. It truly takes audiences into another world, whether it’s in the umbrella shop or on the streets of France. The music and visuals are delightful additions to the bittersweet story of Guy and Genevieve that anyone would be bound to get sucked into. Viewers won’t be able to help but yearn for a love story like in “The Umbrellas of Cherbourg.”