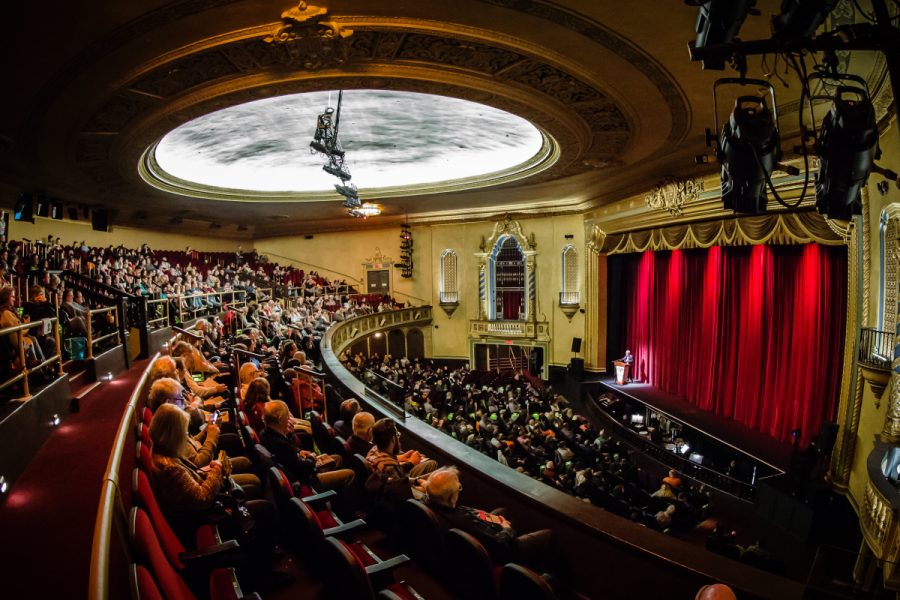 An audience sits in their seats to watch films during Ebertfest in 2018 at the Virginia Theater in Champaign. The theater will reopen for its 100 year anniversary on Dec. 28.

Located in the heart of downtown Champaign, Virginia Theater enters its 100 year anniversary. The theater has experienced several changes since it first opened its doors in December 1921. The theater first began as a vaudeville theater and movie house, but since 2000, it has been run by the Champaign Park District.

“Of course, there’s no vaudeville anymore, but the theater has continued through the decades to remain a prominent local venue for movies as well as concerts, stand-up comedy, dance, plays ballet, community events, Champaign Park District Youth productions and other events and productions,” said Mitch Marlow, manager of Virginia Theater Sales and Public Relations..

The theater tried to stay positive during the pandemic and attempted to offer remote and curbside services but found this to be a challenge.

“We offered curbside concessions for a few months during the lockdown and even tried our hand as a movie-streaming platform,” Marlow said. “The latter proved to be fairly ineffective since there are so many more robust streaming platforms.”

The team at Virginia Theater was excited for their reopening earlier this year in September. Masks are required for all performances except when actively eating or drinking.

“We have also installed Plexiglass dividers at the box office windows and concessions stand and have more aggressive cleaning and disinfecting protocols throughout the theater,” Marlow said.

In order to kick off their 100th anniversary and reopening, Virginia Theater held an Opening Night Community Event, which included 10 performances, including two University of Illinois a cappella groups, The Other Guys and the Xtension Chords.

“There were also tours of the theater, historic displays, food trucks and a silent film on the Virginia’s huge movie screen,” Marlow said. “Organist Jay Warren from the Chicago Silent Film Society accompanied the film with an original score.”

“This features limited release, high-quality films that are outside the mainstream,” Marlow said.

Shown monthly, the film series is curated by Sanford Hess, who selected these films from Ebertfest favorites, classics and other award-winning films.

“We also feature some of the fan favorites from the Roger Ebert Film Festival, which we have been hosting for the last 23 years,” Marlow said.

The Virginia Theater is locally well known for their Ebertfest, their annual film festival named after Urbana native and Illinois alumnus, Roger Ebert.

The theater is in the process of producing a mystery stage production of “The Bat.”

“This was a touring production that performed at the Virginia Theater on opening night December 28, 1921,” Marlow said. “Our production this year, will open exactly 100 years to the day after the original opening and production of ‘The Bat.’”

Based off of the Broadway play, “The Bat” was first produced in 1920 and is inspired from Mary Roberts Rinehart’s “The Circular Staircase,” with the play being created by Rinehart and Avery Hopwood. The performance will be open from Dec. 28 to Dec. 30.

The Virginia Theater looks forward to continuing providing entertainment for the Champaign-Urbana community through the celebration of film and other talents.