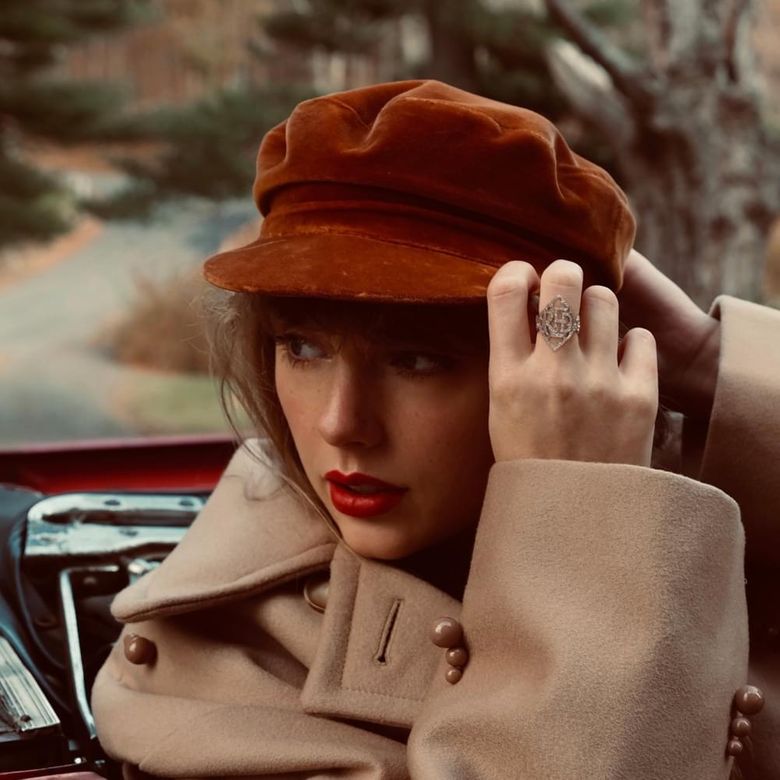 Taylor Swift’s new album “Red (Taylor’s Version)” is shown above. The album was released on Nov. 12 and has had many fans excited about revisiting the album.

On Thursday, Taylor Swift single-handedly brought back one of the most iconic musical eras in her career. Swift released “Red (Taylor’s Version)” Friday, complete with 30 tracks as well as a short film, “All Too Well: The Short Film.” The original album, “Red,” was released in 2012; nearly 10 years later, Swift and fans alike are revisiting the album.

“Red (Taylor’s Version)” was created as an expansion of Swift’s collection of re-recordings, which were done so she could own her music. In 2019, record executive Scooter Braun gained ownership of Swift’s first six studio albums despite her opposition. After promising Swift she would one day own her music when she first entered the industry, Braun sold Swift’s masters to a private equity company in 2020 for $300 million. In order to regain the ownership of her original music, Swift began to re-record her first six albums; “Fearless (Taylor’s Version)” came first in April, and “Red (Taylor’s Version)” is the latest addition.

Fans who grew up with the album are reliving the same nostalgia and emotions from 2012 with both new and old content from the time period. “Red (Taylor’s Version)” adds 9 new tracks ‘from the vault’, many of which went unheard until now, to the preexisting 169 from the original album. It is filled with features from returning artists like Ed Sheeran and Gary Lightbody as well as newcomers like Phoebe Bridgers and Chris Stapleton.

The most standout track on the album is one that fans have been speculating about since the initial release in 2012. “All Too Well (10 Minute Version)” is the original version of Swift’s iconic track that has become a fan favorite despite never being promoted as a single. Swift pens an explicit continuation of the heartbreaking story, speculated to be about one of her ex-boyfriends, Jake Gyllenhaal. The lengthy track plays out like a novel with images and emotions painted by Swift’s skilled lyricism.

In addition to the speculated original version of “All Too Well” finally getting released, a short film featuring said song premiered on Friday. Written and directed by Swift, “All Too Well: The Short Film” stars Sadie Sink and Dylan O’Brien as Her and Him, respectively. The music video sends viewers into the autumnal story world of a fiery relationship that is bound to burn. The performances perfectly accent the intensity of the words sung by Swift underneath the visuals. Fans were quick to notice the age difference between Sink and O’Brien being oddly similar to that of Gyllenhaal and Swift at the time of their relationship. There are plenty of other Easter eggs in the film, which fuel the speculation that Gyllenhaal was the muse of Swift’s heartbreaking ballad.

Another majorly anticipated track did not disappoint in its execution. When it was announced that Bridgers would be joining Swift on “Nothing New,” many were concerned Bridger’s accompaniment would be just background vocals because in her recent work, Swift has a pattern of only featuring female artists as background singers in collaborations. However, fans were pleasantly surprised to hear Bridgers’ solo verses on the track. “Nothing New” is a bittersweet song about feeling burnt out and unwanted after being in the spotlight for so long. The track is stripped of excessive production as it allows the vocals and lyrics to pull at the heartstrings of listeners.

Between “Fearless (Taylor’s Version)” and “Red (Taylor’s Version),” fans have enjoyed dissecting well-known songs for even the slightest vocal and instrumental variations. Popular, upbeat tracks like “22,” “We Are Never Ever Getting Back Together” and “I Knew You Were Trouble” have a new maturity to their carefree messages, while tracks like “The Moment I Knew” and “Come Back…Be Here” still pack the same painful gut punch 10 years later.

It’s been refreshing to hear Swift’s mature, aged vocals on iconic tracks that were landmarks of crucial times in her younger years. There is a sense of wisdom detected in Swift’s voice as if showing that while she was lost during that point in her life, she knows today it all turned out for the best. A hopeful twinge on each track brings meaning to “Red” and the themes it contains. Swift continues the legacy of “Red,” but this time, it’s on her terms.