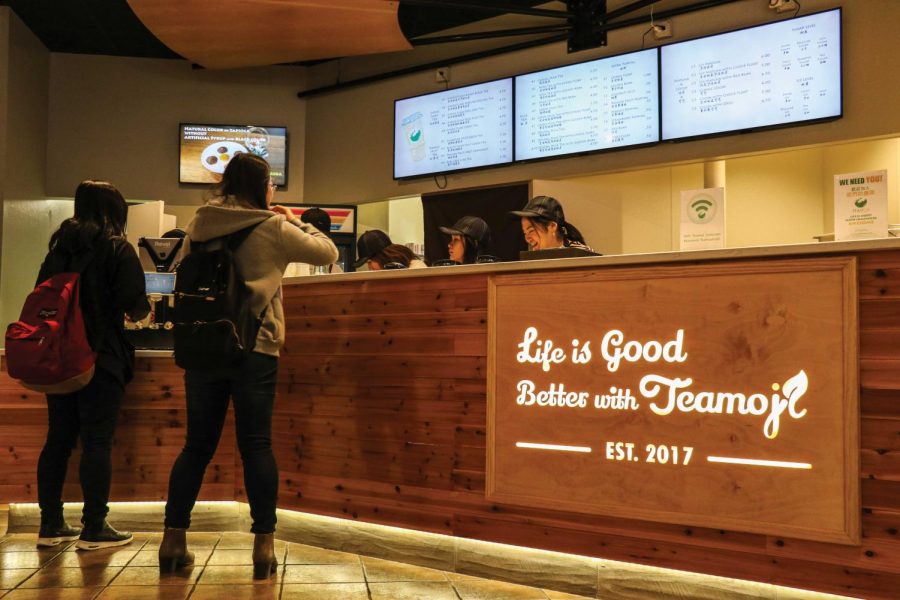 In its first week being open on campus, Teamoji, a new addition to Green Street, has already established itself as a standout thanks to its unique take on bubble tea.

Some students might be skeptical about the necessity of another bubble tea shop on campus. There is clearly an abundance of places to pick up the popular beverage on Greet Street alone.

Taking over the location that was formerly home to Mashawi Grill, the Teamoji menu has something for every taste. But the most intriguing menu item is the cheese float.

With a flavor resembling cheesecake and a consistency like a mousse, it is certainly an acquired taste. It’s also incredibly rich, making the bubble tea drink much more filling and decadent.

It also seems to be getting a mixed reaction on campus. Certain students find the cheese float to be a delicious take on bubble tea, while others find it hard to stomach.

Fangqin Wan, an international student studying human resources, is among the former.

She tried Teamoji and its cheese float during its opening week.

“I really like it,” Wan said.  “Especially the salty cream on top is so good.”

Regardless of what one might think about the unique beverages, it’s clear from the first step inside Teamoji that this establishment is ready to make a name for itself in Campustown. The interior is minimalist and modern, but very sleek and high end at the same time, making it a casual place to relax.

At first glance, it doesn’t seem suitable for studying, or even socializing. However, there’s plenty of seating on the second level that’s far more comfortable and relaxed if you’re hoping for a place to sit and stay for a while.

Teamoji customers should look forward to friendly service. The employees were enthusiastic about the menu (particularly the cheese float) and eager to inform the customers about the best way to enjoy the beverages, asking what they thought of their drinks and if they had any questions.

If the cheese float (or any type of bubble tea) doesn’t sound like your thing, Teamoji is still worth the trip. The menu features classic milk tea and a variety of refreshing fruit-based teas that contain real pieces of fruit and are served in generous portion sizes.

The menu also allows you to customize your drink to your preferred level of sweetness, so everyone can find something to their taste. Add-ons available include classics like boba and pudding, as well as some unique features like oreo pieces.

Teamoji is currently hiring new employees and plans to expand its menu with more drinks, so expect to see and hear a lot more from the store in the future.

For now, grab a friend and head over to Teamoji. You might end up in an argument about cheese, but by the time you leave, things are likely to be sweetened by this new shop on campus.