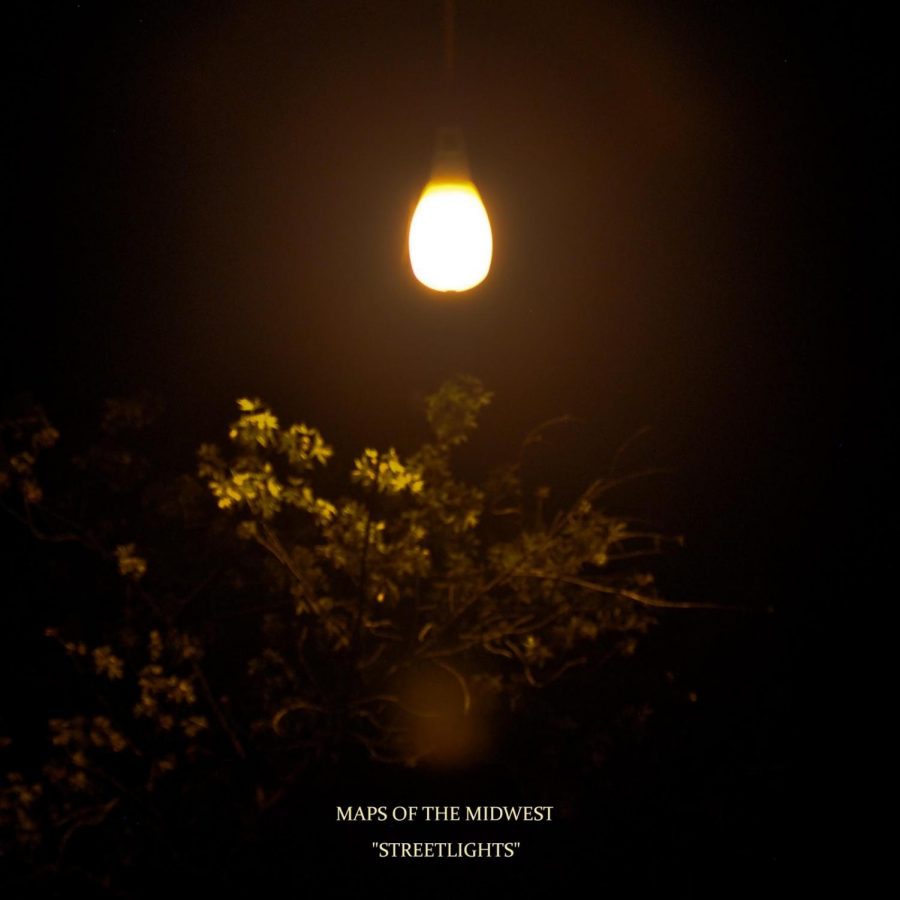 Cover art for “Streetlight” by Maps of the Midwest, which was released on Bandcamp Friday. The song is a tribute to songwriter and group member Taylor Loveall’s grandmother.

With the release of their latest single, “Streetlights,” Friday, folk duo Maps of the Midwest is looking forward to easing back into the live music scene and experimenting with their music style.

Maps of the Midwest is composed of singer-songwriter Taylor Loveall and multi-instrumentalist, part-composer Sarah Cramer. Loveall is the primary songwriter and vocalist of the duo, and he also plays guitar and harmonica. Cramer plays bass, keys and vocals.

“I found out Sarah played piano along with playing bass,” Loveall said. “And I had been wanting to add that sound to some of the songs I had written. We jammed together, and it just took off from there.”

The central Illinois-based duo formed in December 2019 and has released one self-titled extended play and a single since then. The two met through Urbana songwriter/musician Doug Buscemi and began playing music together.

Both Loveall and Cramer hail from the Midwest, and Loveall said his music is influenced by his experience of growing up and living in the Midwest, specifically central Illinois. Loveall currently lives in Mount Zion, while Cramer is from Urbana.

“I’ve found that the Midwest leaks into a lot of the songs I write, which I’ve always used as a way to navigate through life; whether that be healing from the past, rewriting parts of my life or figuring out where it is I need to go next and how to move forward,” Loveall said.

Cramer and Loveall come from various musical backgrounds, so their music blends differing genres. Loveall described the duo’s music as embodying a folkish, singer-songwriter style, though he said they’re hoping to experiment with fusing genres in the future.

“Streetlights” most certainly fall into the folk genre with its somber melodies, harmonica solo and its embrace of the earlier folk traditions of oral storytelling via Loveall’s intimate, melancholic lyrics.

Loveall wanted his lyrics to be the tune’s focal point, saying the wailing harmonica melody “evoke(s) a sense of longing” while the intimate guitar and bass melodies supplement his character’s search for a “place to belong and call home.”

“Streetlights” also pays homage to his grandmother, who spent her youth in an abusive home and ran away when she was a teenager. She moved from the St. Louis area to central Illinois and “started a life of her own.”

Loveall said he still doesn’t know exactly what his grandmother went through during that period of her life, so in writing “Streetlights,” he filled in the blanks with his own lyrical interpretation of her experiences.

“Now that she has passed, I thought I’d use the chance to honor her by writing this song and thinking about what she might have gone through and trying to understand,” Loveall said.

The duo released “Streetlights” on Bandcamp on June 4, and the song will soon be on all major streaming platforms, Loveall said. They also released cassette tapes with the song and a cover of Josh Ritter’s “Girl In The War” (2006).

All money made from the cassettes will be donated to the National Runaway Safeline, an organization whose mission is to protect America’s runaway, homeless and at-risk youth and keep them off the streets.

Because “Streetlights” was inspired by his grandmother’s experience with running away from home at a young age, it seemed fitting to pair the song’s release with an organization that aids adolescent runaways, Loveall explained.

“When she went through that, there probably wasn’t many, if any, organizations that helped with runaway kids,” he said. “I think it’s great that there are organizations like the National Runaway Safeline around now, so if I can, I’d like to play my part in raising awareness and donations.”

Maps of the Midwest is slowly reentering the live music scene, and in early September, the duo is opening for Bloomington-based Sarah Quah Band at Night Shop, a live music venue/restaurant. Loveall said there may be other show opportunities later this summer and fall.