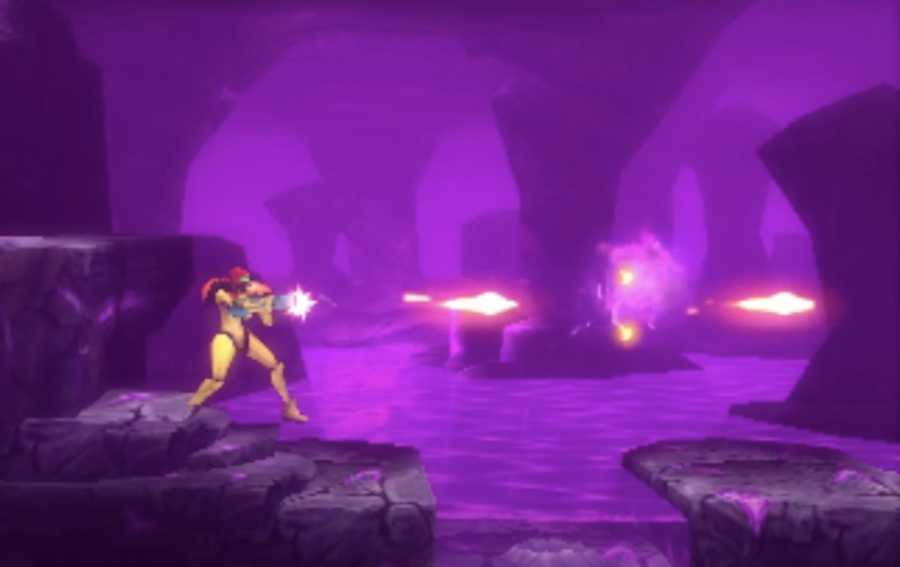 A screenshot from the video game “Metroid: Samus Returns” is shown above. The game was originally released Sept. 15, 2017.

With E3 passing in the rearview mirror, the gaming community again is in the yearly cycle of mixed emotions in the aftermath. Excitement at the news of fresh and surprising announcements, disappointments at the lack of news surrounding hyped sequels and me sulking in familiar sadness because we’ll never see a sequel to “Spec Ops: The Line” (reasonable, given how pretty much everyone who made that game was fired). Good times, good times all around.

Straight to the point, one of the hottest announcements to come was the reveal of a new Metroid game, “Metroid Dread.” Returning to the horror roots of the series, “Metroid Dread” looks to breathe new life into the neglected franchise that Nintendo loves to parade around its company, in either Super Smash Bros tie-ins to marketable plushes to be sold for $35 at your local Target.

I vividly remember getting my hands on the previous installment, “Metroid: Samus Returns,” from my local GameStop and having the employee go hysterical about how much he adored the franchise when he was a kid back in the 1980s. Endearing mid-life crisis aside, he sold me the game, and I binged through the title in a weekend in what would end up being the last game I played on my Nintendo 3DS. It’s a great handheld title that ended its lifecycle in standard Nintendo fashion: dying neglected and begrudgingly abandoned to the bane of its rabid, undying fanbase. The usual cycle.

“Metroid: Samus Returns” is a 2017 action-adventure side-scroller acting as a remake of the 1991 original, “Metroid II: Return of Samus,” which was released back on the Game Boy. The story follows Samus Aran, a bounty hunter sent by the Galactic Federation to exterminate the parasitic Metroids on their home planet and save the universe in usual fanfare.

“Samus Returns” doesn’t aim to reinvent the wheel, packing a safe but well-polished experience. The controls are shockingly tight for a handheld game, with Samus being able to aim 360 degrees with her arm cannon, on top of having a new counterattack that allows for an easy rhythm of countering then attacking that makes combat less chaotic and rigid compared to prior entries. “Samus Returns” can’t escape the 3DS’s graphical limitations, as the game’s visuals are a 3D-rendered mix of moody, atmospheric temples and ugly hallways with warped textures and a weird haze of orange that made the game look like a “Breaking Bad” episode at times.

The gameplay loop has you defeat a specific amount of Metroids in a zone before moving on to the next. In traditional fashion, you are incentivized to backtrack to previous zones once you unlock items you get from the next zone, as to lengthen the game length, and to also throw in some goodies and bonuses for those looking to either get the best items or develop severe carpal tunnel syndrome.

“Samus Returns” also suffers from a more fundamental issue – it’s really old. Now, it’s a remake of a 1991 game, what am I getting at here? No, not the nihilism of retro games but the reality of when this was released.

The Metroidvania genre (the sub-genre of action games inspired by Metroid) was having a boom in 2017. Games like “Hollow Knight,” an indie title with beautiful animation and insanely detailed environments, were selling like public pool funnel cakes. Metroid competed without having the decades of innovation that Metroidvania games packed. You can see where the problem is.

This was what 15-year-old me felt when the credits rolled, that the newer, cooler Metroidvania games were better. Now that I am 19 with years of experience playing tons of great games and getting a greater appreciation for the medium across all eras and consoles, I can definitely say with confidence: Yeah, I really preferred “Hollow Knight.”

I am looking forward to “Metroid: Dread” in the hopes this old-school heavy hitter can bounce back into the mainstream in full force. Nonetheless, to the dozen people who still have that good old 3DS, give this remake a try.