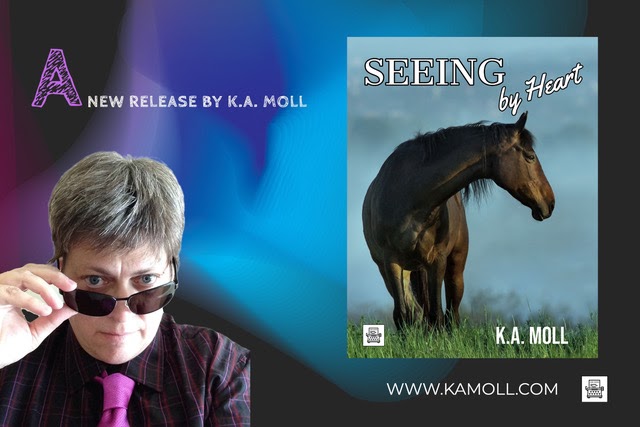 The cover of K.A. Moll’s new book “Seeing by Heart” is shown above. Moll strives to include important LGBTQ+ representation in her books.

With the release of K.A. Moll’s latest book, “Seeing by Heart,” Sunday, the bestselling lesbian romance author said the concept of soulmates is a driving force behind her work.

Moll described her work as “stories about women who have experienced past trauma who find healing in the love of a soulmate.” So far, she has published 10 books since her first book release in 2015.

Her latest book, “Seeing by Heart,” was released Sunday. The book features two leads, Kora Garver and Finn Warner, who are reunited in adulthood after having a close relationship as kids. Readers will follow the duo’s journey as they reconnect at an inn during a snowstorm and “navigate a difficult path through the darkness.”

“Seeing by Heart” isn’t an ordinary release by any means, though. It’s the first first edition book that will be published under Moll’s publishing company, KAM books. After publishing 10 books, Moll said, founding her own publishing company was the next progressive step in her writing career.

As the countdown to publication draws near, Moll is still combing through “Seeing by Heart” and making final edits. Striving for perfection, the author described herself as “compulsive by nature,” saying she must ensure everything is in order, even if that means putting in long hours right up until the deadline.

“The editing just literally comes right up to the last minute,” Moll said. “I will often go through my books three to five times, at least, before they move to publication.”

Moll has a bachelor’s in psychology and a master’s in social work from the University of Illinois at Urbana-Champaign, and she said she leans more toward her social work background in her writing, such as including characters who are social workers. In one of her books, “Haunting Love,” a character is a dean and professor in the University’s School of Social Work.

Moll uses her background in mental health to tell her stories as accurately as possible, she explained.

“Whatever I’m talking about, I try to make sure that it’s accurate so that if it helps somebody somewhere as they read their romance novel, I want that to be the case,” Moll said.

Moll said she writes stories about the healing love of soulmates because she firmly believes in the existence of soulmates, although some may meet their soulmate earlier or later than others. She creates characters who fit with one another, she said, and these complementing characters help each other heal from trauma.

As an author, she said, the stories one writes have to be there to tell, which is why she writes lesbian fiction. Because, as a lesbian, those are her stories to tell.

A few decades ago, she said, it was difficult for lesbians and gay men to be represented in film or literature.

Although she sees more representation for lesbians and gay men in today’s society, Moll sees the importance of writing lesbian literature and the value of her contributions to that collection.

“In writing my books, I try to do my part in adding to the collection of lesbian literature because there are a lot of lesbians out there who are hungry to see themselves in literature and film,” Moll said.

“Seeing by Heart” is available to order on Amazon.