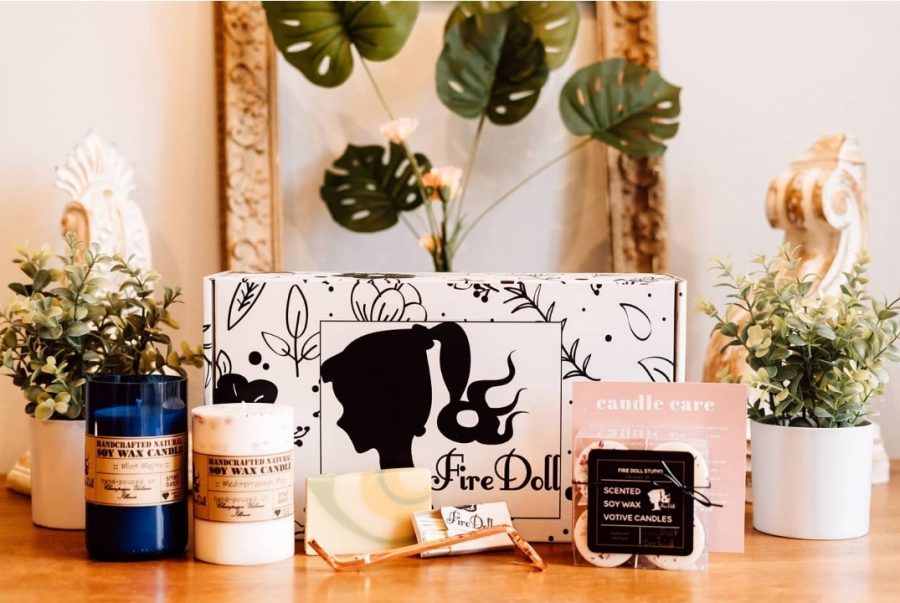 Merchandise from Fire Doll Studio is displayed on a table. The sustainable candle shop will open in Downtown Champaign in August.

Kayla Brown was in college when she started Fire Doll Studio. Her candle-making business, named after her fiery red hair, is almost 10 years old, and Brown is expanding her business and opening her first storefront in Downtown Champaign in August.

Brown said she first started candle making in college because she was looking to express her creativity in a way that would also accommodate her study schedule.

“It was kind of hard for me because I’m such a creative person, you know, I need, I always need to be doing something or just get really stir crazy,” Brown said.

Brown also has asthma and said that finding a candle that she could enjoy was really difficult. She said commercial candles are often petroleum-based or contain other chemicals that aren’t healthy, especially for individuals with asthma.

“So, I decided I was going to do some research and figure out how to make something on my own that I would know what was in it and I would know going into it burning it,” Brown said.

After doing research, finding the right materials and experimenting, Brown started making candles out of the kitchen in her studio apartment. She eventually found that the candle-making process involved a lot of waiting, which she said was perfect in college because while she was waiting for her candles to set, she could do her schoolwork.

“I found that I could put my wax in, and I could read a chapter while it was melting, and I could go, and I could do my mixing,” she said. “I could let it cool, keep reading and do whatever I needed to do, and then I’d have all this cure time, and I could keep studying, so it just fit really well into my studying schedule.”

Brown said that her business took off almost immediately. She started making social media posts showing off her candles and eventually set up a booth at the Farmers Market at the Lincoln Square Mall.

Now, Brown is gearing up to open her storefront, which she said was actually something that came out of the pandemic. As well as a business owner, Brown is also a musician and a nurse. When the pandemic hit, she was unfortunately laid off from her nursing job and also couldn’t perform in live shows.

While Brown wasn’t able to continue with some of her passions, at least she was able to focus more on her candle business. She moved her business online and started doing subscription boxes.

“They just kind of took off, and I was just having a great time doing it, and the website was doing really well,” Brown said.

Brown said she eventually set up an address for online pickup but started getting visitors for retail, whom she had to turn away since her space was only set up as a studio.

Now, Brown has moved to a new space that functions as both a studio and retail shop. She said people will be able to see candles being made and even participate in different activities.

“I love meeting people and talking with people from the community, so I’ve tried to make it as interactive as possible,” Brown said.

This includes different candle happy hours where visitors can enjoy a drink while also learning about different types of candles.

Besides candles, Brown also has a variety of products, like essential oils, bath bombs and other general self-care items. She also offers small gifts that are feminist-themed and inclusive of the LGBTQ+ community, which is really important to her.

“To me, it’s really exciting to be able to interact with my community and create a space that is safe, that is totally inclusive,” she said. “Anything from respecting pronouns to having artwork here that is inclusive, having inventory here that is just for everyone.”