Look out for these artists at Lollapalooza 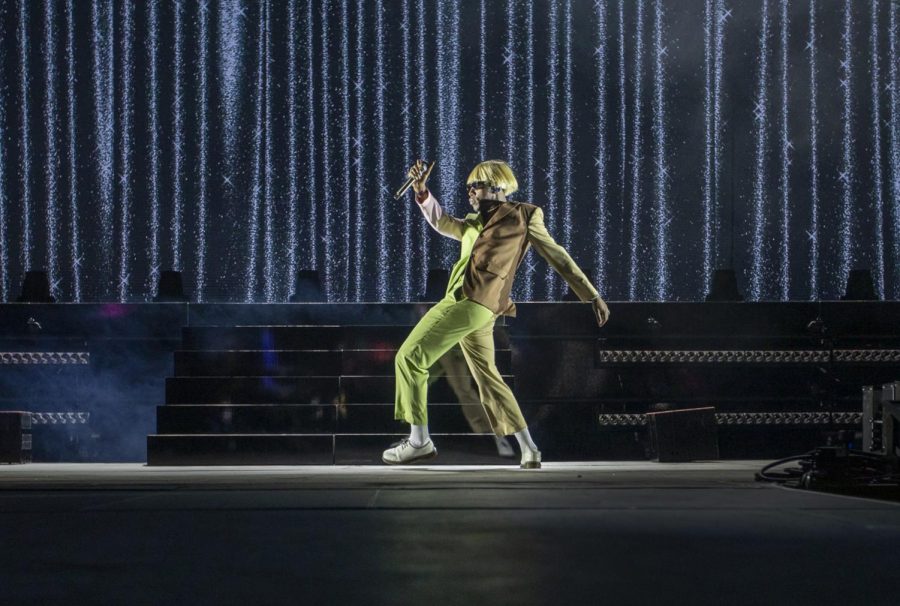 Tyler, The Creator performs on the Camp Stage at Camp Flog Gnaw Carnival at Dodger Stadium in Los Angeles on Nov. 9, 2019. Lollapalooza has an impressive lineup full of watch worthy artists.

It’s that time again! After a year of canceled and postponed shows, Chicago is back with its biggest musical event of the year, and buzz is ready. The buzz staff has come up with the top artists they’re most looking forward to seeing at the festival this year.

Boy pablo performed at Lollapalooza in 2019, but unfortunately I wasn’t able to go, so this performance has been long awaited for sure. Boy pablo (aka Nicolas Pablo Rivera Muñoz) has gained a pretty big following within the past few years and is probably on most people’s indie-pop playlists. The Norwegian singer-songwriter is only 22, yet is performing his second set at Lolla, which tells me that he definitely resonated with people since his last Lolla appearance, and for good reason, too.

Boy pablo’s voice soft, pouty voice is immediately recognizable and has almost become the signature voice of the indie-pop genre. His music is both catchy yet relaxing and his lyrics are amusing and deep at the same time (such as: “Up in the garden alone, I’m freezing, but it’s fine / ‘Cause I’m thinking of you / And all the things we could do / Running as fast as I can, glad I forgot to tie my shoes” in “honey”).

Boy pablo does a superb job of capturing what it’s like to be a young adult growing up in a world of cell phones, mental health awareness and feelings through his lyrics while also creating a distinct sound that perfectly embodies what it means to be in your early 20s, if that’s even possible. His music resonates with so many, so it’s going to be really special to see the crowd that his music connects with the most scream the lyrics back at him.

For a possible setlist, “feeling lonely” and “dance, baby” are high contenders, but I’m also expecting to hear something from his newest album “Wachito Rico,” specifically “hey girl” and “honey.” But no matter what boy pablo performs, I’ll be happy just to see him perform live.

One of my favorite artists, Joy Oladokun, will be at Lolla this year, and I could not be more excited to see her perform. With the release of her latest album, “in defense of my own happiness (complete),” on July 9, there’s a lot to look forward to from her performance.

Oladokun is performing Saturday at the BMI stage from 3:20–4 p.m. Her set will most likely include some tunes from her latest album, like “bad blood,” “someone that i used to be” and “lost.” The 24-song album is over an hour long, though, so she’ll probably play some of her more popular tunes, like “sorry isn’t good enough,” “breathe again” and “Bigger Man (with Maren Morris).” I do hope she plays some of my favorite songs, like “Who Do I Turn To?” and “younger days.” With a 40-minute set, Oladokun will have time to perform around 9–12 songs, depending on how long the breaks between songs are.

Although I haven’t seen any previous concert footage of Oladokun, I think the vibe of her performance will be a bit relaxed and laidback. Her voice is willowy and soulful in both its swells and dips in volume, and her instrumentals fully complement her voice and tone, so hopefully, it’ll make for a unique experience for audience members. As someone who has never seen her perform in a live setting, I’m incredibly excited for Oladokun’s set this Saturday and to see her stage presence and how it manifests at the festival.

As someone who in complete honesty is a bit cynical to the modern music scene, with over-the-top personalities and regurgitated beats continuing to solidify my taste for late 80’s pop goodness, it’s rare to see a modern artist with such a stage presence and sheer weirdness to him, than Tyler, the Creator. He’s an artist to rival Eric Andre, a personality that thrives off of insanity in the presence of others (funny given Tyler was a guest on his show a while back, with the two clashing in how weird they could get).

He’s grown to Grammy-winning status and is in the elite category of big-font on the lineup poster, so he remains my most anticipated act. I may not be going to Lollapalooza given I got no money and I had a job working at the Field Museum a while back when Lollapalooza was in full swing, and I endured the wrath of navigating the train system amidst horrendously crowded party goers (a familiar and unforgettable smell of naked and intoxicated riders being shoved into the train car like a Japanese bullet train).

Point being, I will be at home in my room enjoying the experience in the ideal fashion of scrolling through horribly angled Snapchat stories every single person takes when at the concert, and who once home will never ever watch again in their entire lives. A quant experience that spares me the confusion of navigating the festival grounds in 90-degree weather and vomit-spill minefields. Tyler, the Creator, yes, that’s who I’m excited for, yes.

Tyler, the Creator is performing at Lollapalooza on July 30 at 8:35 p.m.

Since Miley has gone through lots of musical (and fashion) styles, it’s always fun to watch her live performances since each show is iconic and unique. This new current punk phase of Miley is hopefully a taste of what her performance at Lolla will look like this year. She hasn’t released an album since “Plastic Hearts,” so I am hoping that she will play a few surprising and new tracks during her time slot.

I would also love for Miley to perform some covers, such as my personal favorite cover of her’s, Dolly Parton’s “Jolene.” It would also be entertaining to hear Miley’s vocals paired with another Lolla performer this year, such as MAX. While rather unlikely, it would be really cool to get the opportunity to put together a nostalgic throwback concert of this year’s performers, such as Jimmy Eat World, All Time Low and Aly Mishaka along with Miley Cyrus. It would be awesome to see them perform together!

The power that Miley has to captivate a crowd is so uniquely her and this year’s Lolla crowd is so lucky to have the opportunity to see Miley live.

Miley Cyrus is performing at Lollapalooza on Thursday at 8:45 p.m.