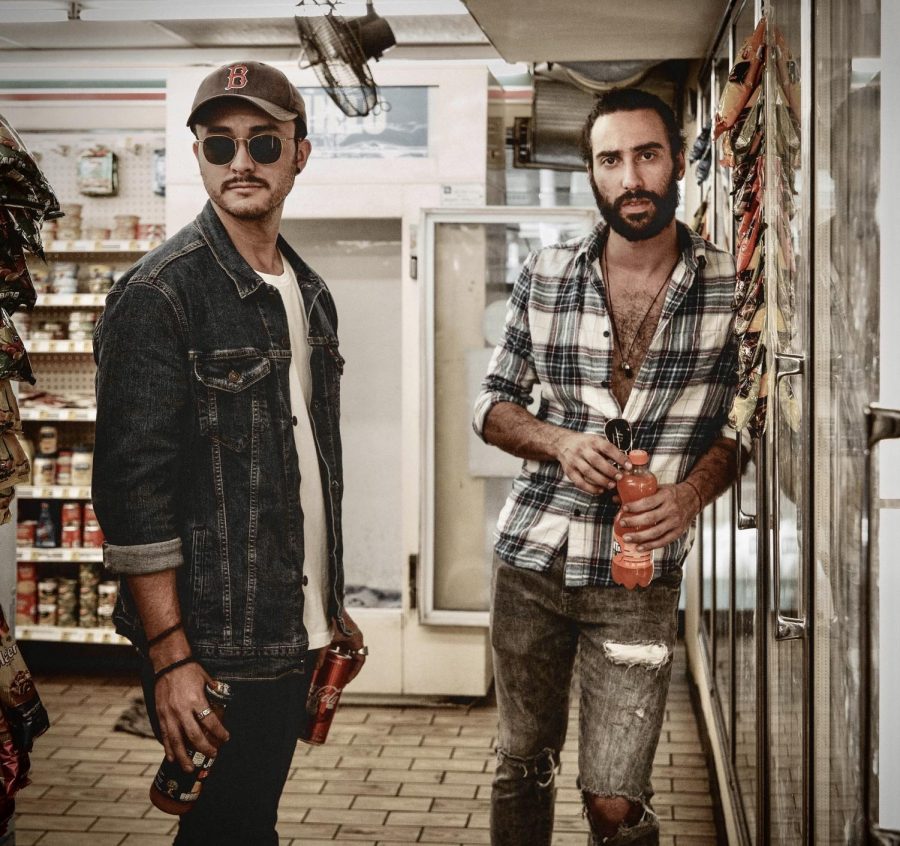 When David Stewart Jr. and Chava Ilizaliturri were asked to perform at Lollapalooza in 2020, they understandably freaked out. But like every other live performance, Lolla was canceled last year due to COVID-19, which meant that the pair would have to wait another year to perform.

Stewart and Ilizaliturri make up the alternative rock duo Migrant Motel, and not only have they been asked to perform at Lolla again this year, but they were asked to headline the BMI stage on the first night of the festival, which Stewart said was both exciting and unexpected.

“I think the big surprise the second time around came one day when we saw that were headlining the BMI stage on the first night,” Stewart said. “It was a really nice moment to be surprised with all that.”

Stewart is originally from Peru and grew up half in Peru, half in Florida. He and Ilizaliturri met in Boston where they were both studying at Berklee College of Music. The two eventually formed Migrant Motel, which Stewart said had gone through a few different stages before finding its current sound.

After collaborating with Norweigan producer Peder Etholm Idsoe, Stewart said they settled on a sound that mixes “heavy riffs” with more contemporary pop production similar to the likes of 21 Pilots and Imagine Dragons, which Steward said was something Etholm Idsoe came up with.

Stewart said he and Ilizaliturri are excited to showcase this sound at Lolla this year, but Stewart also acknowledges the big responsibility he feels the pair has closing out the BMI stage Thursday night.

Because of this, Stewart said they’re really stepping up their performance for the festival and rehearsing practically everything, from live mixing and on-stage technicalities, to outfit changes.

“We were running like fireman drills style practices the other day of plugging in all our s— on stage quickly and making sure that everything goes to the right spots,” Stewart said. “The electronics have definitely stepped up so that we’re gonna be super tight and super flexible and just give the show to the Lollapalooza standard.”

Migrant Motel isn’t playing around this weekend, and why would they? It’s both their first big festival and first live performance in a year and a half, says Ilizaliturri. But he also said even when the pandemic wasn’t happening, playing together was still difficult. Stewart is based in Los Angeles and Ilizaliturri lives in his hometown of Mexico City, so they’ve actually been several steps ahead of everyone else because they’ve been making music remotely for a couple of years now.

This also allowed the duo to incorporate both the American and Mexican scenes into their music. Ilizaliturri said that these two environments have reflected onto the music they write, Migrant Motel even has a couple of bi-lingual songs sung in English and Spanish, such as “I Don’t Wanna Know” with Latin American artist Soy Emilia and the more recent “Muñequita Rota.”

“When I chat with David or we just talk a little bit about life, the things that happen in my environment can actually influence the idea of the song and even though, we’re human beings and we’re all the same, in a way, the lifestyle that we all live is different between, I think, the U.S. and Mexico,” Ilizaliturri said.

The remote working has also allowed Migrant Motel to try out some new, exciting projects. For example, Stewart said that during the pandemic, though, they tried something new and started releasing 60-second songs on Instagram.

“That kind of our COVID product that now a lot of them have become full songs that we’re waiting to release, and a lot of those we’re actually playing in this Lollapalooza setting,” Stewart said

But that doesn’t mean that not being able to play songs has been easy, and Migrant Motel is still going all out for Lolla, including performing some songs that haven’t been released yet along with some fan favorites from their album “Volume One.”

Stewart also confirmed that the pair will be performing “Sweat,” the sleek, empowering new single that came out Friday that inspires listeners to be the best they can be at whatever they do.

Stewart said besides performing some of their biggest hits and “Sweat,” they’re looking forward to “a really fun, lively, in-your-face show and to experience us on the biggest stage that we’ve ever done, so everything that comes with that.”

Migrant Motel will be playing at Lollapalooza in Grant Park Thursday at the BMI stage from 6:50 p.m. to 7:30 p.m.