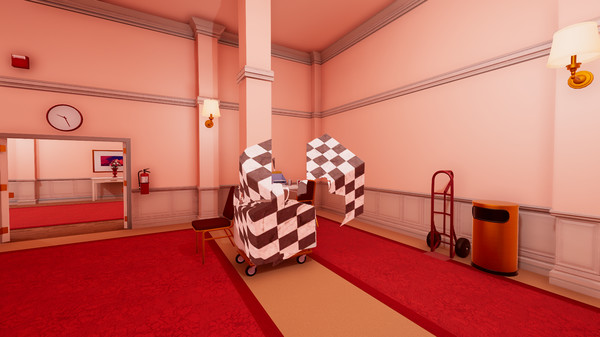 The game “Superliminal” is a mind-bending game with many puzzles to solve. The game was released on Nov. 5, 2020.

In the good old days of my suburban elementary school in central Illinois, which was a byproduct facility of a dying American wasteland in the wake of the recession, I always made sure to attend my school’s Scholastic Book Fair. The little event was held every year, and the library was filled with expensive books and overpriced toys that bore little to no relation to education. I never bought anything, just browsed whatever caught my eye.

In such a collection, there were always those trippy illustration books, the kind filled with pictures that moved if you stared at them for a long while. Back then, it was simple deception and mesmerizing fun. “Superliminal,” the 2019 puzzle game by developer Pillow Castle, captures everything about that experience, both the fascinating magic imagery of deception and the childhood wonder of such.

“Superliminal” is in the vein of Valve’s icon “Portal” from 2007, in it being a first-person puzzle game with a linear, escape-room design of progression. It goes further by taking the “Portal” atmosphere of bureaucracy and science gone wrong in nonchalant apathy. Just business as usual.

The game is based around the mechanic of objects you pick up having their size distorted to what you see. It’s hard to explain on paper (but incredible to see in the game) as it basically can be described as picking up a tiny chess piece and holding it up to your face. It is bigger than when you picked it up, but now imagine that enlarge chess piece is the massive size it is right in front of you, taking up half the room in its enormous size.

This is more than a gimmick, and the game goes beyond simple puzzle-solving where size matters. You soon, in clear Valve fashion, find more devious things are going on behind the scenes and get involved in a rouge artificial intelligence bent on keeping you testing forever to not admit fault in her own programming. It gets more crazy as the plot progresses but never goes deeper than it needs to, wrapping up in an appropriate two hours.

While it has all the ingredients of “Portal,” the game is not without flaws. The biggest drawback, in comparison to Valve’s title, is the easy nature of the game’s puzzles. While it throws the occasional brain twister, you can wrap your head around most puzzles almost instantly, with the struggle being pulling off the moves needed to solve it. That sounds like a nitpick (it is), but that’s the negative extent of things. It’s hard not to love this game.

Overall, “Superliminal” scratches that itch of clever, sarcasm-driven puzzlers that “Portal” created in the 2000s and has had a surprisingly high number of inspired copycats try to replicate its magic. It’s like the wave of ’90s mob movies following “Goodfellas.” Yeah, it’s an imitation of something great, but that doesn’t make it bad in its own right. If anything, it’s better to copy this idea.

“Superliminal” is available on Xbox One, PlayStation 4, Nintendo Switch and PC.