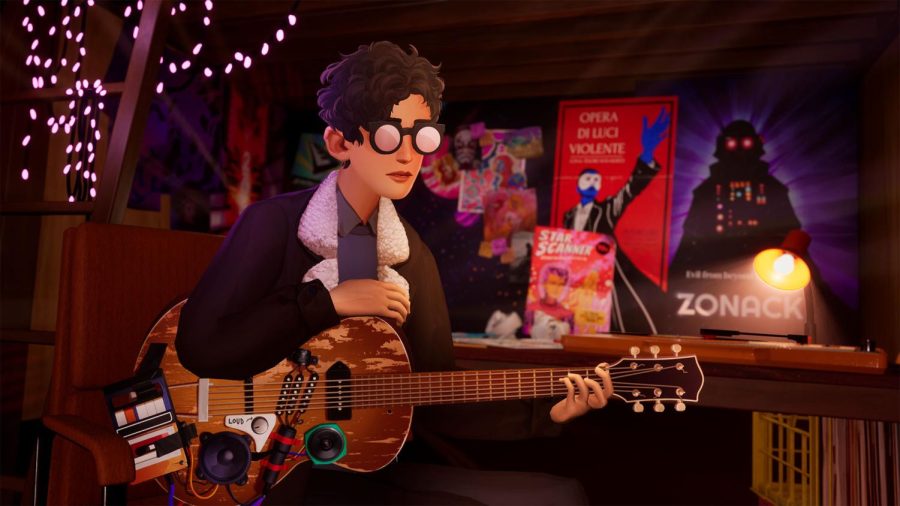 A screenshot of the game “The Artful Escape” is shown above. The video game released on Sept. 9.

I’ve said it time and again that there is truly no better feeling than entering a game with high expectations and leaving with said expectations surpassed.

“The Artful Escape” opens with a simple, peaceful forest backdrop on its title screen. I went to check my phone for just a few seconds before starting and then stood there transfixed on the first sample of this game’s wonderful soundtrack: a beautiful folk song that set the tone of this pop-odyssey through musical nostalgia.

The game is a 2D-platform with a narrative focus on Francis Vendetti, the nephew of famed folk singer Johnson Vendetti. He appears in the game’s opening on the edge of scenic cliff practicing for the performance he has that night, a concert set to save the economy of his dying rural town up in the Colorado mountains. He has his whole life laid out in front of him, to follow in the footsteps of his legendary uncle, a celebrity icon to the country scene who died too young. Despite having it all, Francis isn’t his uncle in the slightest, and wants to truly wail in electric pop-rock rather than dusty folk country guitar.

It’s the classic struggling artist story, but the game takes a bit of a lighter tone than many stories of this nature. Replacing existential dread and depression with cheerful, dry apathy and humorous cynicism is a welcoming, fitting tone for a teenage angst story.

However, it’s not a game about just sitting at home stressing. Rather, it follows Francis passing out at his desk and being sent on a tie-dye drenched sci-fi quest in deep space, where he must play in a series of otherworldly concerts to truly find the musical note he identifies with.

This is where this title truly shines. You traverse three separate planets all beautifully constructed in stylish color schemes: a frozen planet of neon fish jumping from the sea, a desert city with giant pink mosquitoes falling from the sky, a rainforest of purple nose hairs dancing to trap music. This wild creativity sports homage to late-70’s sci-fi imagery straight out of a “Guardians of the Galaxy” movie.

The gameplay itself is very linear and “flat” in the kindest sense. You play the entire game moving right and occasionally playing concerts that are colorful games of Simon Says in the end. But I’m not phased by that. In fact, I find a simply constructed game with all its effort put into presenting a rich and touching storyline is refreshing in my days of looter-shooters and death match binges.

If you desire a heartwarming, uplifting musical in these trying times, “The Artful Escape” is a no-brainer.

“The Artful Escape” is available on Xbox One, Xbox Series X/S and PC.