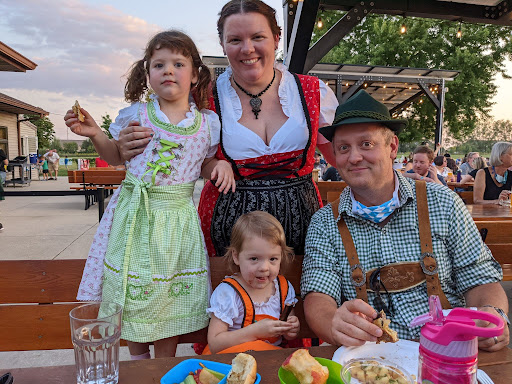 Matt Rigg’s poses for a photo at the annual beer festival, held annually at Riggs Beer Company in Urbana. The festivities are inspired by Germany’s original Oktoberfest and celebrates German culture and tradition.

Excited is an understatement for Matt Riggs’s feelings toward this year’s Oktoberfest. Sept. 16 – 19 marked the return of the beloved beer festival, held annually at Riggs Beer Company in Urbana.

Riggs Taproom and Beer Garden officially opened their doors to the public in 2016. Born and raised on their family’s fifth-generation farm, Matt and his brother Darin felt they needed to share the profits of their farm and make a sort of difference with them.

“We were searching for a way to add value to the family farm’s grains that we grew,” Riggs explained. “It was difficult economically, especially with modern agriculture.”

“Breaking that model of commodity farming and the control value chain of manufacturing specialty grain all the way to the consumer” was Riggs’s full dream, he said, which he was eventually able to accomplish through the beer company.

Riggs explained that he wanted the small family farm to keep giving back to the next generation. Though it took nearly 20 years to transform the farm into Riggs Beer Company, he gains fulfillment when reflecting on his accomplishments, describing the company as “a dream we’ve been able to realize.”

Riggs Beer Company’s most recent accomplishment was the success of this year’s Oktoberfest.

Riggs’ wife is German, and he said he owes much of his passion for beer and the brewing process to German roots. After spending a lot of time in Germany, Riggs first felt his personal connection to the festival.

“Oktoberfest was something I didn’t want to stop experiencing,” Riggs said. “The seasons are changing; it’s harvest time. It’s the most exciting time of year for a lot of beer drinkers.”

Every year Riggs’ Oktoberfest gets bigger and bigger, and this year was the biggest festival turnout to date. The festival starts at Riggs the same weekend Oktoberfest begins in Munich, Germany.

“It’s the right time of year for us to release that (Oktoberfest) beer and party,” Riggs said. “This year was bigger than ever. People came out and had a blast.”

Riggs explained that the Oktoberfest festival takes a traditional approach of live grass music and accordion players hyping up the visitors and beer drinkers.

Though the festival is geared towards adults, families and younger visitors can also attend the festivities and have fun while engaging in the activities, including live accordion players playing German tunes while wearing traditional German garb, a game of corn throw and even the option to play in the children’s park on Riggs property. Visitors can also get to know the two adorable cats owned by the Riggs family who both live on the beer company’s property.

“Nothing goes too late,” Riggs said regarding the 10 p.m. night Oktoberfest closing time. “We take after Munich traditions.”

When asked about his favorite type of beer, Riggs chuckled and said, “I like so many beers! One thing I always tell Americans who have never been to Germany: Don’t judge German beer by how they taste on the shelf in America because it’s not as fresh. I would recommend for anyone to take a trip to the South of Germany; where they have high-quality beer all over the place.”

“Freshness is the key to beer, as close to the source as possible,” Riggs said. “If I had to choose a favorite beer, it would be anything fresh and well made of German-style.”

Next on Riggs Beer Company’s radar is their popular Christmas market, which the Riggs team is very excited to reopen this year after a year-long hiatus due to COVID-19. Initially launched in 2019, their German-style Christmas market, made up of huts and vendors, is set to be open for the season between Black Friday and the weekend before Christmas.

This year, the market will feature one of the country’s largest glass Christmas trees to be built by artist Jason Mack. Riggs said he is looking forward to the tree and believes it will be a nice compliment to the outdoor market. His passion for the brewing process, the Champaign-Urbana community, German culture and his love for beer shine through in his work.

“There is nothing better than sitting underneath a tree drinking a good beer and listening to some live music; just about as good as things can get,” he said.