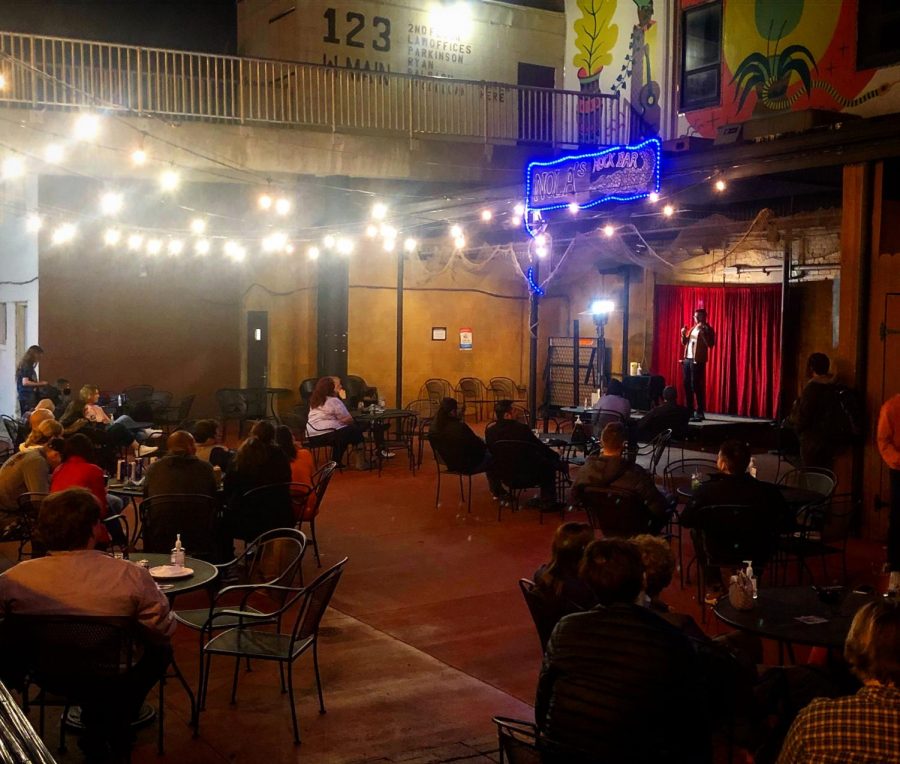 Open mic night at C-U Comedy lets people share what they have to say. C-U Comedy is bringing back its open mic nights at NOLA’s Rock Bar and Pizzeria Antica.

C-U Comedy is back with “The Open Mic,” featuring two stand-up nights a week in both Champaign and Urbana. Hosted by the Tuttle brothers, the shows were previously held at Clark Bar for the past six to seven years, but they lost it during COVID-19 when the owners wanted to go in a different direction.

Jesse and his brother Justin Tuttle have been in the comedy game for the past 12 years.

“It started as something that was just a hobby and something to do, and I’m absolutely incapable of having hobbies without making them my job,” Jesse said

They came up with the C-U Comedy Facebook page around 2010, Tuttle said. He said originally, they were just doing open mics here and there, which is why they started C-U Comedy branding.

Austin Douglas, who grew up in Champaign, has been performing since June and has since become a regular performer at the open mic nights. He said he typically talks about being a pre-med biology major, the 12 surgeries he’s had, parents, being half Vietnamese and other unique aspects of his identity.

The first time Douglas performed happened a day before he was scheduled to perform. He decided to volunteer for a friend who wasn’t feeling it, and, of course, it was the first day a documentary crew was filming, he said. He said that although performing was anxiety-inducing at first, it was exciting.

“Jesse, he does this sometimes just for fun, ” Douglas said. “He’ll have the person going up first for their first time, go up, and open the show. And I did that. And it was a really great experience.”

He explained the Tuttle brothers have grown their brand beyond the C-U area. Their comedy community is connected on Facebook, and they keep each other posted on upcoming shows.

“The Tuttles have a great home base, and they run a great show that people from towns a couple hours out will come down to,” Douglas said.

They have brought attention to the comedy scene in Champaign, as well as made a name for themselves.

“They have a very interesting role to fill, so to speak, in the Midwest,” Douglas said. “If you go to any of those spots, and any of the regulars ‘know you’ it’s like, ‘Oh, I’m from Champaign,’ ‘Oh, you know the Tuttles then!’ They kind of are well-known in the Midwest.”

Tuttle said that summer attendance at C-U Comedy open mics was terrific and that he’s hoping it continues throughout the fall and winter season. There are typically 11 performers, which Tuttle said he feels is the sweet spot for timing.

As the nice weather holds up, C-U Comedy will continue hosting outside on NOLA’s patio (Thursday nights), with seats close to 80 to 90 people.

“I think both rooms have a different feel to them. Where Pizzeria Antica is more intimate because it’s smaller and inside, NOLA’s has been out on the patio where it’s much bigger in terms of how much we can reach,” Jesse said.

Douglas said he feels both venues are home to two different scenes.

“I think they both bring in different kinds of crowds,” he said. “So it’s good to get practice in each environment.”

When asked what advice they would give to those who are interested in trying stand-up comedy, Tuttle and Douglas both agree: You just have to go out there and do it.

“The biggest time you grow is when you go up on stage and you completely bomb,” Douglas said. “It’s a really big ego check. It really forces you to grow, and it really thickens your skin those times. So, worst-case scenario, if you bomb, it’s not a big deal.”

Tuttle said performers at C-U Comedy don’t really have any problems.  He said everyone who performs consistently is nice and supportive of everyone when they come out.

“​​I’m 12 years in, and I still have a bunch of misses on jokes sometimes, and I’m supposed to be a professional that’s done this for 12 years,” he said.

Those who are interested in performing can email Jesse in advance to reserve show time at their next open mic.