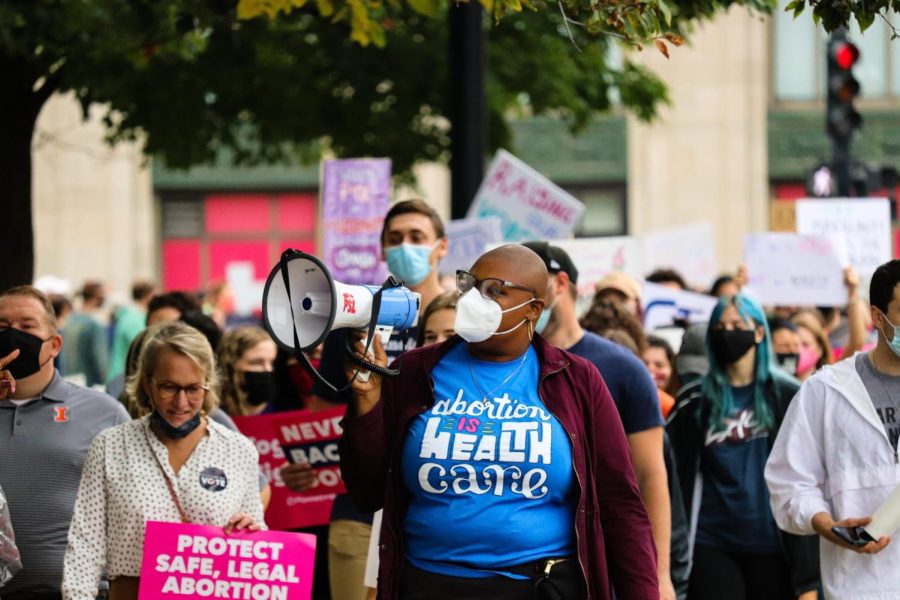 Last weekend, women’s rights activists across the country took to the streets to march for women’s rights, including right here in Champaign-Urbana.

“Why are you marching today?”

“As man, it’s especially important to come out here and support my female friends and support their equal rights and equal right to choose, and I think that it’s just a really good thing for the campus to have this event.”

“This is a life and death issue for women. And there isn’t any way that I would have stayed home. This is just so important. … I’ve been demonstrating since the ‘60s, and it seems like it’s a web of, you know, flux and flow, but it always comes back to this crazy business of wanting to take people’s rights away rather than re-enforcing and making strong our human rights.”

“I’m actually a trans man, so I’m here for that, and I just believe Planned Parenthood should stay safe and I believe in women’s rights. … Trans have ovaries, too, so it’s our rights, too, so I want to protect our rights because we deserve to be able to have safe abortions as well.”

Bakhtawar Mirjat, second-year student at the University College of Law

“Everyone should have the freedom and autonomy to make their own decisions about their health. … I think it’s absolutely hypocritical of people who are for limited government to make decisions about increasing government’s control on someone else’s bodily autonomy.”

“Just like men can make their own decisions, we can too. There should be no laws that restrict us from doing anything, and that’s because we’ve allowed patriarchy to last longer than it should. And so, it is time for us to move on from that and to tell them that you won’t dictate any aspect of my life, my hair, my color of my skin, the lipstick, I wear, how tall or short my dress is. You don’t dictate what I do, and you certainly don’t dictate my reproductive rights.”

The march started with a speech from Urbana City Council Member Chaundra Bishop, who condemned the recent Supreme Court decision not to block a new Texas law that bans abortion once a fetal heartbeat can be detected.

Bishop said the Supreme Court’s decision sets a dangerous precedent that could allow other states to enact stricter abortion laws.

“So here we are again and still demanding the court to respect and uphold precedent,” Bishop said. “It’s beyond time for the United States to recognize that access to abortion is a key part of access to human rights.”

“These abortion bans are racist and will make access to reproductive health care for people of color and those working to make ends meet even more difficult,” Bishop said.

Bishops’ talk followed with a small speech from Nikki Budzinski, University of Illinois alumna and pro-choice advocate who’s running for the 13th Congressional District. She encouraged listeners to vote for pro-choice candidates to continue making Illinois a safe-haven state for women across the Midwest who are seeking access to reproductive health care.

After hearing the first two talks of the day and passionately clapping and shouting out words of affirmations, event attendees marched along Green Street holding signs that read: “Desperate women find desperate means” and “Men of quality respect women’s equality,” among several other phrases.

Attendees then marched over a mile from Alma Mater to the Champaign County Courthouse, shouting out chants like “My body, my choice!” and “What do we do when they attack? We fight back!” Several of these were met with supportive car honks from drivers passing the march.

Marchers were met with more speakers once arriving at the courthouse, the first being Tanya Josek, who spoke about their experience with sexual violence and how access to safe and legal abortion has affected them.

“While I was lucky enough not to get pregnant, I cannot express how much relief it felt knowing that I had the right to choose what to do with my body and that having a choice meant that I would not be prevented from achieving my dreams or to be stuck in an unhealthy relationship,” Josek said.

They also said that the abortion issues directly affect LGBTQ+ people, who Josek said are often left out of the abortion conversation despite often being victims of sexual violence more often than straight cisgender women.

“Having bodily autonomy allows these individuals, regardless of their identities, to have a space to heal and grow as they need,” Josek said.

After Josek’s talk, Sarah-Lin Shen, community organizer for the Party for Socialism and Liberation of Champaign-Urbana, gave a passionate speech about “violence against women perpetrated by men” and called for the “dismantling of a patriarchal system upheld by capitalism that leaves women vulnerable against them.” Shen’s speech was received with loud applauses and verbal confirmations the audience agreed with her points.

The last speech of the day was from C-U state representative Carol Ammons who spoke about abortion access in Illinois and her work in the state legislature.

She said Illinois is a leading state in abortion access, criminal justice reform and protesting policies, among progressive legislation.

“That means we are the leaders of the nation,” Ammons said. “We have to continue to fight for LGBTQ rights and equality, refusing to yield to all the people who can live in our society with those kinds of pressures that they have to hide. But we won’t do that in Illinois.”

If you or someone you know needs to report a sexual assault or harassment case, visit https://wecare.illinois.edu/report/.