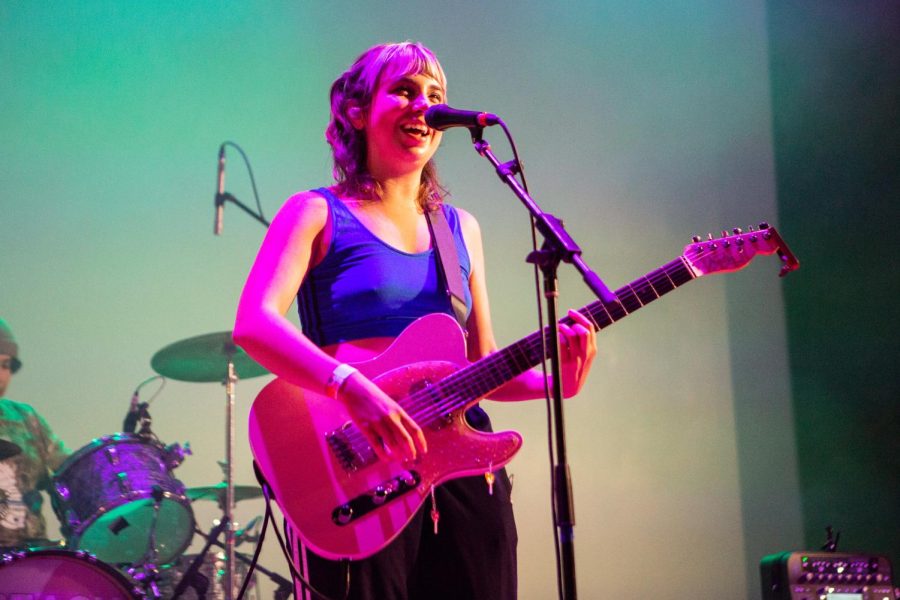 Lili Trifillio sings during a performance at Foellinger Auditorium on Oct. 7. Lili Trifillio is the primary singer/songwriter for the band “Beach Bunny”.

Doors to Foellinger opened at 7 p.m., and even with the light drizzle of rain, people were lined up outside of the auditorium. The line moved fairly quickly as people rushed to their seats, filling nearly all of the balcony and floor seats. Fans showed up for the band decked out in bunny ears, pastel colors and various band merch. As they waited for the show to begin, the crowd jammed to some early 2000s and ’70s and ’80s throwbacks.

LLO LLO, another Chicago-based grunge band, opened the show. Fans gathered toward the stage on the floor, ignoring seat assignments amid the excitement of the music. The stage was illuminated in shades of yellow, orange, red and sometimes purple.

The band played original songs such as “Rabbit’s Moon” and “Let Me Know (pt. I) & (p. II),” as well as some unreleased music. LLO LLO has another upcoming performance at the Rose Bowl Tavern in Urbana on Oct. 16.

Lights in the auditorium were dimly lit and the stage lights’ colorful settled to purple as LLO LLO thanked fans and finished their set.

As Beach Bunny made their appearance, fans cheered and rushed the stage.

The band opened with their viral track “Prom Queen” from the extended play “Prom Queen” (2018), which is currently sitting at over 100 million plays on Spotify. Beach Bunny gained traction on TikTok earlier in 2019, where songs like “Prom Queen” and “Cloud 9” were a hit with users on the app. Keeping with the viral momentum, they released their first album “Honeymoon” in 2020.

Trifilio engaged with the audience throughout the performance, even getting the crowd to sing “Happy Birthday” to an audience member whose name could not be heard through the cheers and shouts of fans.

Beach Bunny has a casual swag about their look; Trifilio came sporting Adidas track pants and a bright blue tank top complete with a cool black-and-white mullet. The other members – Alvarado, Henkels and Vaccaro – stuck with all black clothes accessorized with flannels and hats.

The band also gave the crowd a sneak peek of what’s in store next, playing a new unreleased song called “Oxygen.” Fans waved their hands in the air and flashed their phone lights to fit the ambiance.

Trifilio continued to keep the audience on their toes, asking them to crouch until the beat dropped for the song “6 Weeks” from their EP “Prom Queen.”

Before their next song, Trifilio told the audience, “It’s real emo hours,” joking that “Nothing says sadness like a hibiscus LaCroix,” before taking a sip playing songs from their newest EP. Their newest EP, “Blame Game” (2021), was recorded during lockdown and has four tracks. It features their most recent hit “Good Girls (Don’t Get Used)” as well as “Love Sick” and “Nice Guys,” which were also performed on Thursday night.

Finally, before leaving, the band thanked the audience for showing up and bringing such great energy. Trifilio encouraged fans to pursue music by reminding the audience that the group met in college themselves.

Fans chanted “One more song!” as the band made its exit off the stage.

Star Course made a strong comeback since its last event in 2019, and it has continued to bring fantastic talent to perform at the University.

To learn more information about upcoming events, check out @starcourseuiuc.