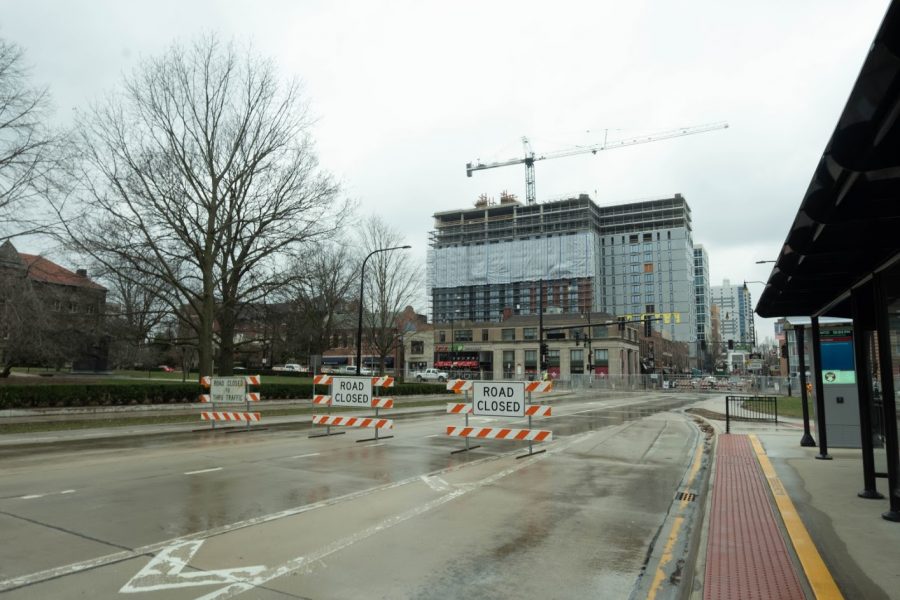 The intersection of Green and Wright sits under construction at noon on March 16. Construction is now halfway complete.

The Multimodal Corridor Enhancement Project is pushing forward amid COVID-19. Construction plans have been moved up, and health regulations were implemented for the safety of construction workers.

MCORE is a construction plan that is funded by the University, the U.S Department of Transportation and Champaign-Urbana Mass Transit District. The project’s main goal is to improve traffic flow and infrastructure on campus.

According to Kris Koester, public information officer for the City of Champaign public works, construction is halfway done in the intersection of Green and Wright streets. This intersection construction was not originally planned to start until after Commencement in May. However, due to its cancellation, the project team decided to move up their planning timeline and work on the project right after spring break.

Koester said under Illinois Gov. J.B. Pritzker’s executive order, construction is considered an essential function. He said they are moving forward with phase B of project four of the construction, working on Wright Street, Springfield Avenue and Green Street.

“Work is continuing as originally planned before we started last summer. During this time, in addition, we are asking for construction crews to apply social distancing requirements and job site safety requirements,” Koester said.

Safety guidelines that are implemented for the construction environment consist of maintaining social separation from workers when possible and requiring workers to use personal protective equipment.

“Since we were allowed to move forward, some of the measures that are placed is general contractors are accessing health of workers upon arrival and during work by asking questions about how they are feeling, making sure they’re not coughing, don’t have a temperature … providing additional hand washing stations,” Koester said.

Syntyche Kanku, senior in ACES, said although construction does not affect her due to not going outside, she is concerned about the workers’ health.

Kevin Soto, graduate student in social work, said he is also concerned about the workers’ health. He hopes they receive sufficient care or have regulations for a safe working environment. However, due to how long the MCORE project has been on campus, he said he hopes this will speed up the process.

“It’s great that they are trying to get this construction going, which means that people are donating money or trying to improve campus, but just because it has been going along for so long, it is kind of a staple of what campus is right now,” Soto said. “It makes it a little less pretty. It doesn’t deface it by any means, but I mean, if they can get more work in and be properly protective then now is a great time.”

Koester said it is unclear whether the lack of students on campus will affect the overall pace of construction.

“I would say it is probably too early to tell. I think there will always be more flexibility and time to finish and perhaps get more of the project completed before the fall semester begins, with hopes that students return for regular fall semester,” Koester said.