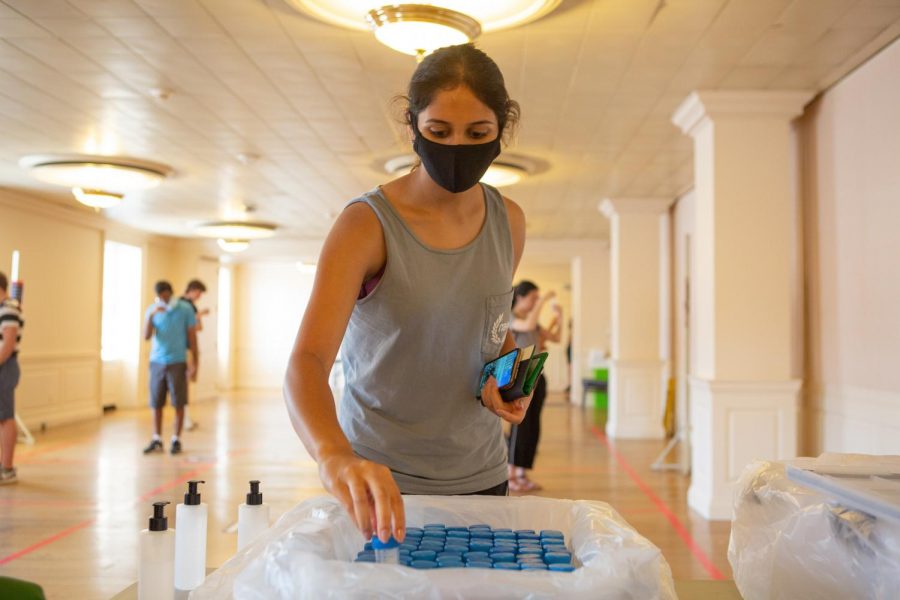 Kushi Gowda deposits her testing sample in a receptacle after completing a COVID-19 test at the Illini Union on Sunday. Last Monday, saliva tests conducted at the University made up 1.3% of COVID-19 tests nationwide.

After two summer months and a move-in week, the returns are in for the University’s saliva-based COVID-19 test, and they’re staggering.

Over 70,000 saliva tests have been conducted since the July pilot. Over 10,000 tests were conducted in 24 hours multiple times, with the capacity for 20,000 tests in a day. There are nearly 20 on-campus testing locations, with the average result returned in 5 hours.

With an ever-growing mountain of data, members of the University’s COVID-19 SHIELD: Target, Test, Tell team have modeled out a vision for the semester that would make Illinois the national standard-bearer for University reopening.

The main consensus: There will be a bump in cases. According to lead modeler Goldenfeld, around 200 students will bring the virus into the campus area within the first two weeks of school.

By Friday morning, around 100 students had tested positive for the virus, with most students isolating in the University’s reserved rooms and others sent back home.

These numbers are well within Goldenfeld’s projection. The group was confident that the school’s reopening plan is second-to-none.

“If it can’t happen here, there’s no place that it can happen,” Pryde said.

Here are the main takeaways from Friday’s meeting, the sources of the University’s confidence and the messages the group had for returning students.

What measures are in place to control the virus?

It all starts with the saliva test. Developed from May 3 to June 18 by a team of eight University scientists, the method presents several key advantages to control the spread of COVID-19.

Initial studies show the saliva test’s sensitivity is on par with or greater than that of the nasopharyngeal swab test. After all, saliva “is the medium that matters,” said Burke, one of the test’s lead developers. By collecting samples from where the virus is spread — saliva aerosols — the testing “likely provides a more relevant indication of infectiousness.”

Also, it’s scalable. Compared to the swab, the saliva test necessitates far fewer healthcare workers, since the saliva is self-collectable. It’s more comfortable and repeatable than the swab and presents less risk for false positives. Sometimes, swabs can pick up dead virus from the nasal cavity.

The rapid turnaround of results is the greatest advantage, however. Thanks in part to the VetMed diagnostics lab — now converted into a human COVID-19 testing facility — and the Safer Illinois app’s test communication, students, faculty and staff can know their status within hours, instead of up to six to 10 days later from the swab test.

In mid-July, test positivity briefly peaked at 1.5% due to spreading at reopened bars and restaurants, before dropping to 0.2% by the end of the month. Positivity is rising, but the University projects it to peak at around 2%, well below the 8% guidance in Phase 4 of Gov. J.B. Pritzker’s state reopening plan.

What’s on the horizon?

In comes the model. Headed by professor Goldenfeld, the University is taking a comprehensive approach to projecting the future.

The model maps out common student movements through campus, projecting the spread of the virus down to the aerosols bouncing through classrooms, bars and restaurants, and how mitigation strategies of masks, testing and contact tracing will do to counteract that spread.

It assumes contact tracers fail to reach 50% of the contacts, that class size will be the same as it was during this time last year: 45,000, which, due to students opting to stay home, won’t be reached this semester. It assumes that students will party and socialize at normal rates, many without masks.

Without any precautions in place, the model predicts 20,000 students would get the virus in the first month, with 31,000 having been infected by the end of the semester.

With campus-wide twice-a-week testing and other mitigation layers, the University predicts around 700 students will be infected by semester’s end, including the 200 projected imports. Goldenfeld said the effects of this will go away within two to three weeks if the projected isolations, precautions and contact tracing occurs.

The Champaign-Urbana Public Health District has beefed up its contact tracing capabilities. Thirty-five new full-time tracers have been trained and onboarded, bringing the department total up to 150 employees.

Provost Andreas Cangellaris said the University has invested $6 million to put the current testing capabilities in place. On Monday, the school began its COVID-19 online dashboard, where the public can view the total numbers of tests performed, positives per day and moving positivity rate from on-campus saliva tests.

How big of a role do students play in this?

With how many mitigating layers have been implemented in this plan, it may appear failsafe. But officials said student behavior still plays a key role in success.

“We do not assume that everybody is a perfect angel, and we don’t want to demonize the social aspect of being at a University,” Goldenfeld said. “We know it’s part of the experience and it’s critical to the models.”

Though the model plans for some indiscretions, is that a free pass for reckless abandon? No.

“That doesn’t mean everybody can just say ‘party on.’ No, the message is: party safely,” he said. “Everything one does that captures a superspreader event puts a burden on the community, puts a burden on the public health department, puts your friends, your family at risk.”

Local governments have come down on social gatherings in the last week. Both Champaign and Urbana’s mayors instituted emergency orders limiting the size of parties to 10 guests or fewer, excluding the hosts and residents of a property in Campustown.

Beyond a maximum $750 fine, the University can also discipline repeat offending students, all the way up to suspensions, Chancellor Robert Jones said. Faculty and staff can face consequences from human resources for disobeying local ordinances as well.

Jones said the University has spoken with campus Greek life organizations and social groups, and that it’s been “aggressive” in emphasizing the potential public health consequences.

However, Burke and other officials trust the student body will take the virus seriously.

“(We’ve heard) young people are irresponsible, shortsighted, and they’re going to make bad decisions that will disrupt our SHIELD process,” Burke said. “And I always smile and look at them and say ‘you’ve never met a University of Illinois student!”

Burke “knew this was going to work” on Wednesday afternoon, when he drove past a row of campus fraternities. What he saw brought him to tears.

“They had pulled a ping pong table outside, with their masks on, playing ping pong, having fun, catching up on all the things they’ve done over the summer,” he said.

His message for the student body: “The world is watching.” With the FDA Emergency Use Authorization, there’s a potential to bring the saliva test to locations across the country. Last week, the Smithsonian contacted the SHIELD team, asking for them to “start building the Smithsonian display they’d show at the national museum if this works.”

“So wear your mask with tremendous pride,” Burke said. “Don’t have a party in a basement and cause a superspreader event. Take great pride in reminding each other, wear your mask, stay apart, wash your hands and together, we can absolutely crush this thing.”