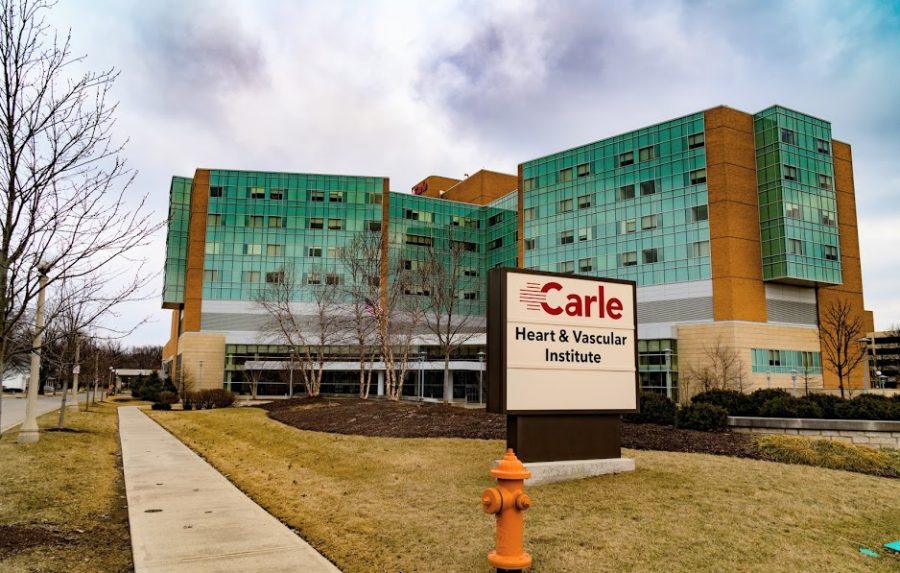 The Carle Foundation Hospital, located at 611 W. Park St., stands tall on March 3, 2019. The saliva COVID-19 testing offered on campus is currently only available to University students, faculty and staff.

Through the collaboration of local health agencies, including Carle Foundation Hospital, Champaign County has made great strides in testing capacity since it saw its first case on March 15.

When the pandemic first swept through the nation, COVID-19 testing was only available to the Centers for Disease Control. Individuals had to meet strict qualifications for testing, such as traveling from certain high-risk countries and having specific symptoms.

If all criteria was met, samples were collected from the individual and sent to the CDC for testing. Once the CDC’s testing technology was deployed to states, testing could continue in Illinois at the state level. Individuals who met travel and symptom qualifications would complete an assessment form, which would be reviewed by the local public health department and then the Illinois Department of Public Health.

Once the sample was sent to the state lab for testing, the result would take anywhere from 24 to 72 hours to be concluded and communicated with the sample’s owner.

In May, the Champaign-Urbana Public Health Department had a discussion with Carle and the University to run tests locally. Testing machines and employees from the University were made available to Carle.

“This was a game changer for us because we didn’t have to wait for getting approval from the state, and all people that we thought were qualified for testing, we could send directly to Carle Lab,” said Awais Vaid, deputy administrator and epidemiologist at the CUPHD.

Unlike the 72 hour turnaround time for results by the IDPH, local testing results in Champaign were now available within 24 hours.

When Carle first started testing, they could do a few hundred per day. Now, Carle does at least 2,000 tests per day, with the potential to double that number within the next few weeks, according to Vaid.

Carle is expecting the delivery of new testing equipment within the month.

“Everybody in the country is trying to buy the same machines and so that has been backordered for weeks,” Vaid said.

With the start of the fall semester and students flocking to campus, the CUPHD has been preparing for the past few months by working with the University to come up with a plan on what to expect once the University opened.

One such element was having move-in week staggered over eight days and requiring students to get tested before they were allowed to enter their dorms.

“We are anticipating that the cases will go up because individual students are actually coming from all across the country and they are traveling, and they themselves do not know the status of their infection,” Vaid said.

However, Vaid said the University’s COVID-19 saliva test will greatly help due to the ease of testing and short turnaround time of about four to six hours.

“We’re expecting that this is going to be a game changer in allowing the campus to function as normally as possible, (allowing) us to do things that no other Campustown in this country has been able to do so far,” Vaid said.

The direct saliva COVID-19 testing technology is currently only available to University students and employees, not Champaign County.