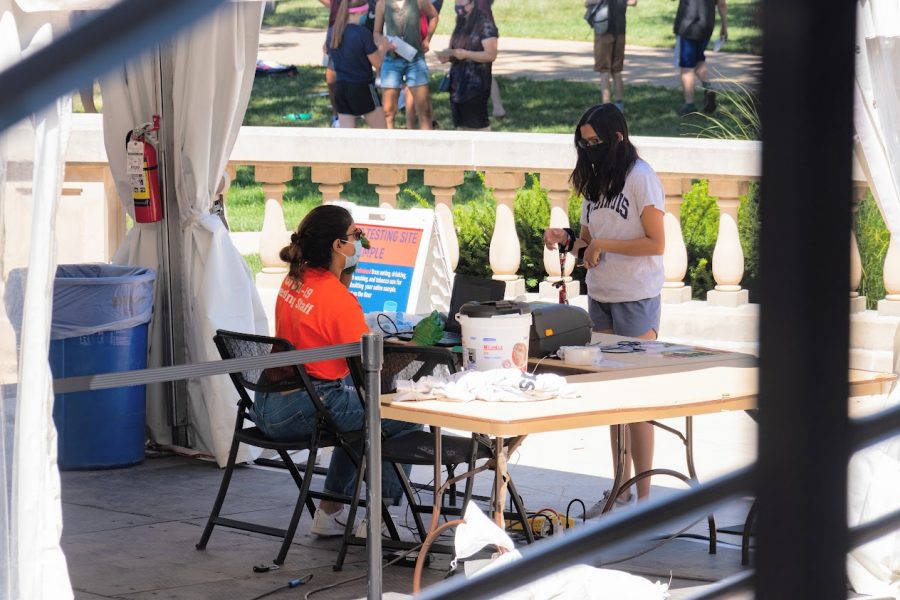 A student arrives at a university coronavirus testing site located outside of Foellinger Auditorium on Aug. 21.

According to University officials, 280 individual students, faculty and staff tested positive for COVID-19 using the on-campus saliva tests from Aug. 16 to 24.

This is the first total of positive cases from on-campus tests confirmed by the University.

Currently, the University’s COVID-19 dashboard only displays positive tests, which include retests of individuals who already tested positive for the virus.

Over the same eight days, the University administered just over 71,000 tests and got 415 positives back, for a positivity rate of 0.58%.

University spokesperson Robin Kaler corrected that figure in an email: 280 cases from on-campus tests were done Aug. 16 to 24, according to the Champaign-Urbana Public Health District.

Kaler said that case count fits within the University’s projections for that time period. The plan is to start including cases in the dashboard “as early as next week,” she said.

On Aug. 21, Nigel Goldenfeld, professor in Engineering, unveiled the SHIELD team’s initial projections for the semester. The expected “bump” from students returning to campus was 198 imported cases, plus or minus 90.

“We’ve identified some positive carriers, incoming students who got infected, many of them asymptomatic, and they’re now in isolation,” Killeen told CNBC on Friday. “We don’t like this virus — we want to crush it. And that’s what we’re doing, and we’re doing it at a massive scale.”