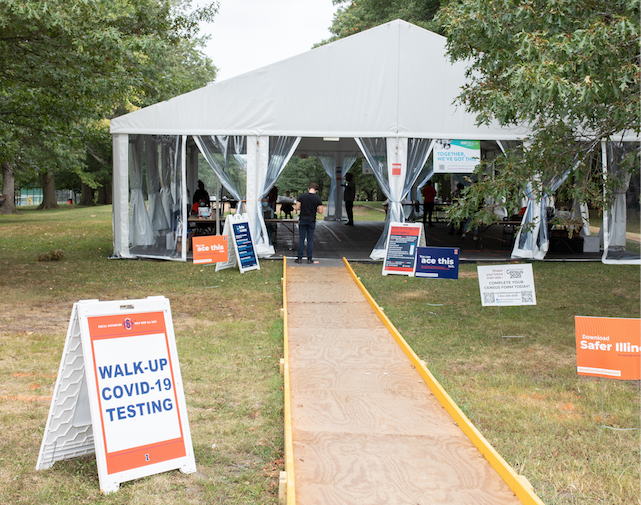 Students stand in line to be tested at the Stanley Illini Grove COVID-19 testing tent on Wednesday. 182,060 saliva tests have been administered since the beginning of on campus testing.

Since students began moving in on Aug. 16, the University’s on-campus testing program has confirmed 1,013 COVID-19 cases from over 147,000 saliva tests in the same time period.

This Monday was a record high for new on-campus cases, with 230. Sunday marked the highest new case positivity rate, at 2.86%.

The University began on-campus testing on July 6. Since then, a total of 182,060 tests have been administered to students, faculty and staff.

The University revamped its data on the COVID-19 dashboard on Monday and refreshed the data twice on Wednesday.

The previous highest single-day new case positivity rate was recorded on Saturday, when of 2,895 tests, 1.73%, or 50, identified new cases of COVID-19.

For the last week, the rolling average case positivity rate is about 1.16%. This percentage is calculated by adding the total positivity rates from the past seven available days together and then dividing by seven.

In addition, members of the campus community can find the number of total test results obtained per day compared with the daily positivity rate.

The University is also collecting data from cases that cannot be traced, along with capacity for those who must be sent to isolation and quarantine spaces.