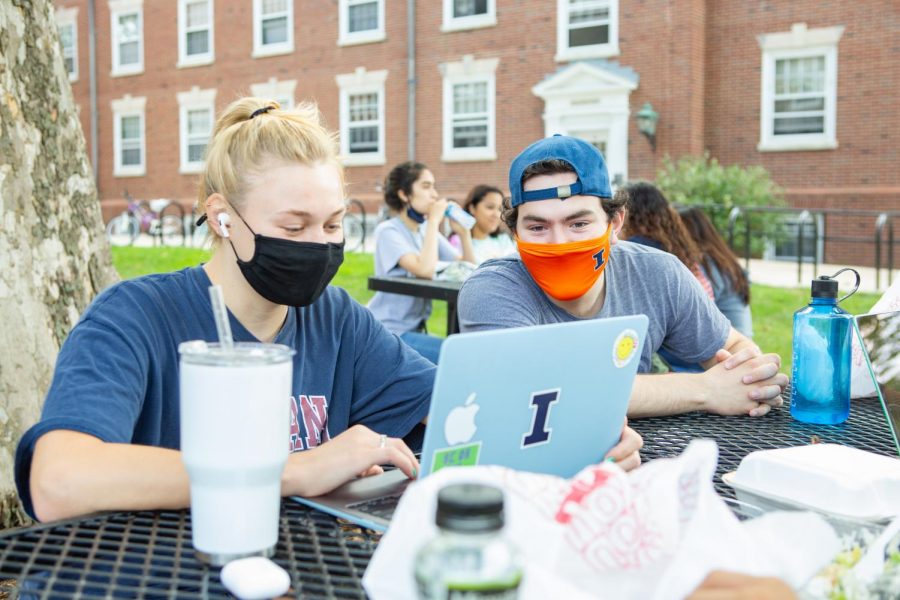 A pair of masked students look at a laptop while sitting at a table outside of Lundgren Hall on Sunday. After a spike in positive cases during week two, the positives lessened in week three.

After a spike in new COVID-19 cases during the second week of classes, the University of Illinois upped restrictions on student movement, discouraged travel during Labor Day weekend and required faculty, staff and graduate students to test only once a week.

The week ended Sept. 4 turned up the newest positives from students, faculty and staff since the University began its saliva tests in July: 895 new cases of COVID-19 were identified from 74,000 tests, for a new case positivity rate of 1.21% across the week.

The week ended Friday, Sept. 11 was substantially lighter: 340 new people tested positive for the virus after 53,000 tests, for a seven-day new case rate of 0.64%. Saturday was also encouraging, with just 10 new cases from 4,009 tests. The 0.25% new case positivity rate was the lowest of the semester so far.

In all, from week two to week three, 28% fewer tests were conducted, and new cases dropped by 62%.

The seven-day new case positivity rate that the University displays on its dashboard isn’t an accurate measure of how much of campus has been infected, because the University does not share how many individual students, faculty and staff are being tested every week. Most students test twice a week, and those who test positive are usually taken out of the testing pool for a little while.

Additionally, some students who are at high risk of exposure are being ordered to test three times a week.

The University’s two-week order for students to limit themselves to essential activities ends on Wednesday.

Since students first began moving in Aug. 16, 1,874 people have tested positive for COVID-19 using on-campus saliva tests, including 1,592 since classes began on Aug. 24.

To date, the University has conducted almost 290,000 saliva tests and identified 1,967 cases of COVID-19 from them since the tests were introduced in July.