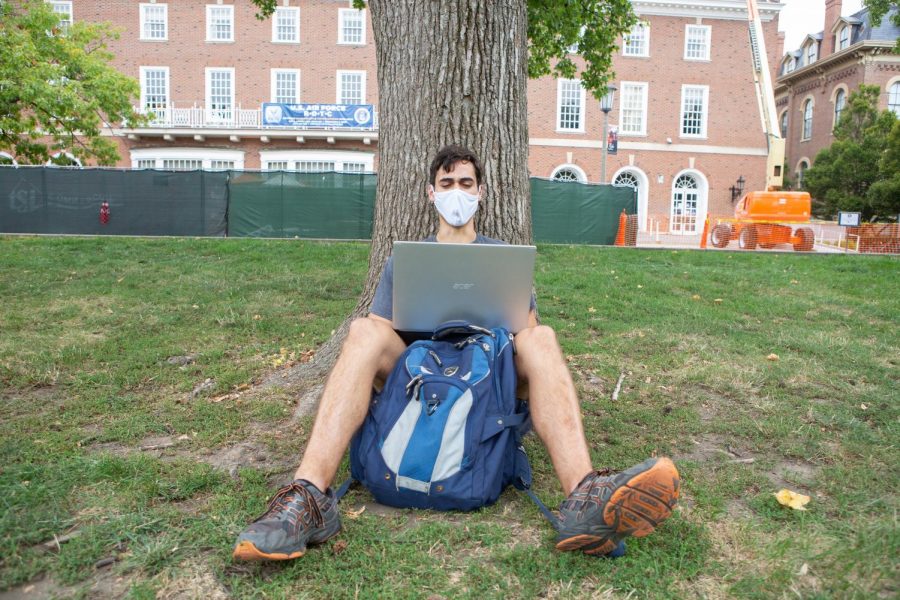 Junior Tony Glatz sits underneath a tree on the Main Quad on Wednesday morning. Overall, testing efficiency has improved — with most results being updated within 24 hours, the rate of inconclusive tests has remained stagnant and the rate of invalid tests has dropped from 5% to 0.67% from July to mid-September.

The share of new COVID-19 cases continues to fall in this week’s rounds of campus tests.

For 11 straight days, under 0.4% of an average 8,000 daily tests have been identified as new cases of COVID-19, a prolonged rate unseen since the summer.

On Saturday and Sunday, the University confirmed just 13 and 11 new cases respectively, the two lowest daily totals in over a month.

In the wake of the University’s two-week stay-at-home order for undergraduates, the on-campus spread appears to be slowing.

It’s no small feat. According to Martin Burke, professor in LAS and SHIELD Team leader, around 35,000 people are testing for the virus on campus every week.

According to Burke, these days most test results are being returned within 24 hours after a lull from Labor Day weekend tests, many of which weren’t returned for over two days.

Burke said the rate of inconclusive tests has remained steady, around 2% of all tests since they were  introduced in July.

Inconclusive tests are relayed when one or two of the three COVID-19 genes are found in the sample.

The rate of invalid tests has dropped quite a bit. Invalid tests are usually improperly done by the saliva sampler —eating or drinking under an hour before the test or submitting too little saliva.

From July to late August, around 5% of all tests came back invalid, said University spokesperson Robin Kaler.

From Sept. 13-17, just 0.67% of all tests came back invalid. Back in the first week of testing, when mostly Illinois athletes were being tested, a full third of tests were invalid.