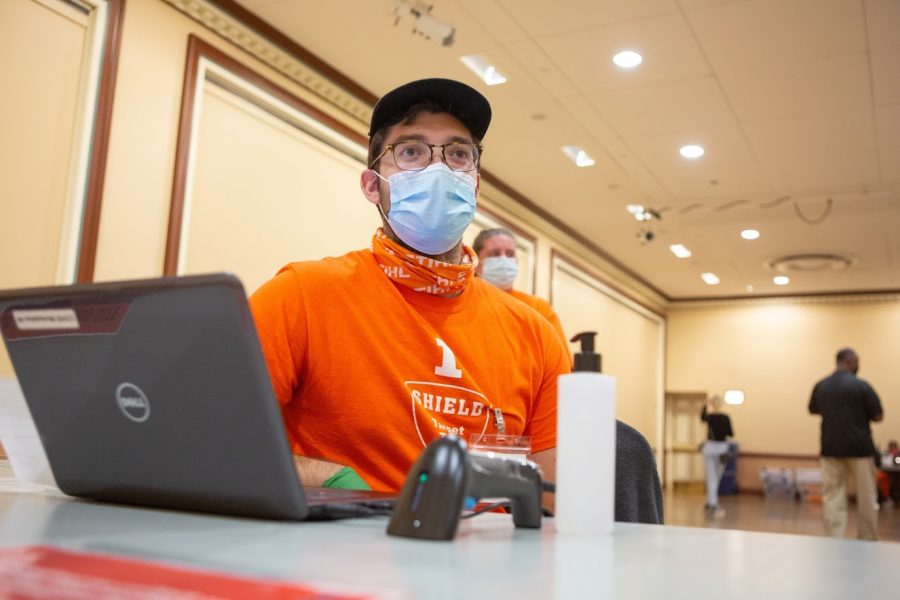 A coronavirus test site worker waits for students to arrive at the Illini Union test site on Oct. 30.

Another 48 new people tested positive for COVID-19 on campus on Monday, bringing the University to another unforeseen benchmark: more than 2,500 cases since students began returning to campus in mid-August.

There is a typical bump in new cases on Mondays and Tuesdays of every week, which modelers attribute to weekend spread of the virus at campus gatherings.

Monday’s 48 cases is the most on a Monday since Sept. 7, back when the University was in its early lockdown stage after a big spike in cases. That week, 69 new people tested positive for COVID-19 on Monday, Sept. 7 and another 81 did on Tuesday.

This comes after an encouraging weekend, when University tests identified just 16 new cases from more than 8,200 tests on Saturday and Sunday. The single-day totals — nine new cases on Saturday and seven on Sunday — were the lowest all semester.

Sunday’s single-day new case rate, 0.16%, was the lowest since Aug. 12, before the University ramped up its testing efforts.

Another 288 people tested positive between Aug. 15 and the beginning of the semester after 55,000 tests. These were most of the “imports” of students, faculty and staff who arrived on campus with the coronavirus.

Over the summer, 87 individuals tested positive from almost 33,000 on-campus tests.

In all, since the University’s testing program began on July 6, 2,620 people have tested positive for COVID-19 after 481,906 on-campus saliva tests.

Therefore, 5.4% of people who’ve ever taken a test on campus have tested positive for the coronavirus.

According to Kaler, about 38,000 people are testing every week.