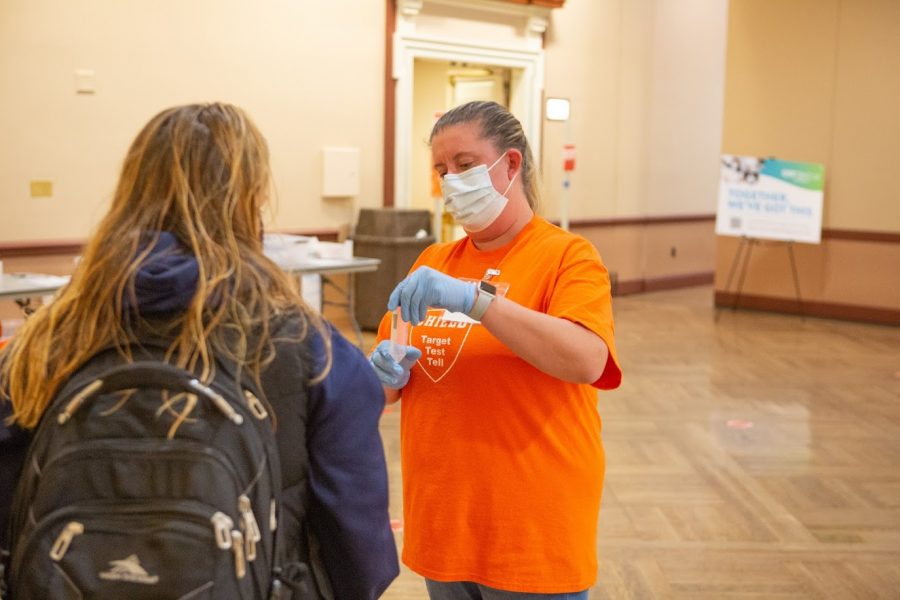 A University coronavirus testing worker hands student Alexa English her test tube in order to take a COVID-19 test at the Illini Union on Sept. 30.

On Wednesday, the C-U Public Health District confirmed another 33 cases of COVID-19 in Champaign County, with 46 new recoveries.

This Monday, another person from Champaign County died from the coronavirus. She was a woman in her 90s with underlying health conditions.

In six days, four people in Champaign County have died from COVID-19, after 41 consecutive days with zero new deaths. Countywide fatalities for the virus stand at 24.

There were also another 12,472 tests conducted in the county on Wednesday, bringing the test total up to 585,341.

To date, 5,071 people in Champaign County have tested positive for COVID-19 since the pandemic began. Of them, 4,701 are considered recovered by CUPHD, and 347 are active.

ZIP code 61820 is still Champaign County’s biggest contributor to the pandemic, with 2,396 confirmed cases there, 170 of them active. Sixteen new confirmed cases were added to the ZIP code’s total on Tuesday, though 32 more recoveries were reported, bringing the active case count down by 16.

The ZIP code 61820 encapsulates the area within I-74 on the north, Prospect Avenue on the west, Windsor Road on the south and Wright Street on the east, covering most of Campustown.

The ZIP code with the next highest number of active cases is 61801, in Urbana, with 35.

More than two-thirds of all county tests have been done on people between the ages of 10 and 30 years old.

CUPHD reports breakdowns of cases and tests by race. According to their webpage, 65% of people who’ve tested positive in the county are white, 14% are African American, 6% are Asian, 14% are “other” and less than 1% are unknown.

Other cases to tests disparities exist in racial demographics. Asian people represent 6% of cases despite getting 18.9% of tests, while African Americans comprise 14% of cases in the county while only receiving 8.1% of tests.