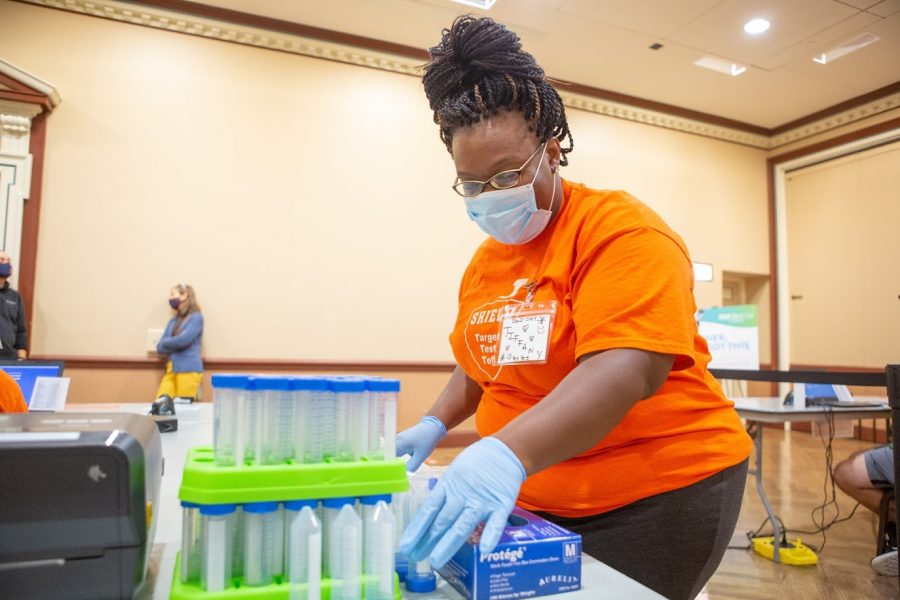 A coronavirus test site worker organizes vials at the Illini Union on Sept. 30. Some students who have previously been infected by COVID-19 are now getting false positives from their tests.

Students who have previously contracted the coronavirus are facing issues when getting retested due to virus remnants in their system.

Delaney Phelan, junior in AHS, contracted the virus earlier this summer in her hometown and recovered before returning to campus only to test positive once again a few weeks later.

“I did a full quarantine at home and when I came to school I was told that I could still test positive for up to 90 days, but I tested negative like three or four times on campus,” Phelan said. “When we had a big spike here and started to go on the two-week quarantine that’s where I tested positive.”

The COVID-19 test is highly sensitive and “can detect down to 500 copies per milliliter of SARS-CoV-2 in the saliva,” according to Martin Burke, associate dean for research at the Carle Illinois College of Medicine.

It’s unclear how many false positives have occurred, but the University’s testing process has been able to control the spread of the virus due to its sensitivity.

This precise testing detects the virus at its early stages and allows the University to lock down on individuals before they become infectious.

“The idea there is that when you become infected, your viral load goes very high while you’re in your isolation and then it starts to come down,”  Burke said. “But, there can be a window of time after the isolation where we can still detect it in the saliva because it’s so sensitive, but that doesn’t mean you’re infectious.”

Students who are having issues with these inconclusive positive tests work with Dr. Robert Parker from the McKinley Health Center and the Champaign-Urbana Public Health District on a case-by-case basis to ensure they aren’t showing symptoms.

“If you have a test after isolation and your viral load still is very high, then Dr. Parker works with those individuals and helps make sure that they don’t go out and affect other people. That’s why we still test to make sure that the viral load is in a safe range,” Burke said.

Phelan had to contact her primary care physician at home to prove she had previously tested positive and didn’t have the virus again. During the verification process, Phelan had to quarantine in her apartment for more than a week until her results from home were approved.

“I got my results from my immediate care from home and I had to email them the results,” Phelan said. “(CUPHD) didn’t call me for like a few more days after that, and it was a really long process overall.”

The University is currently working on finding an efficient process for the post-positive testing program to track these cases and deal with them accordingly.

“I think it is really important to point out that we’re about to enter a very challenging time. It’s getting cold, the weather is going to be bad and the flu season is coming,” Burke said. “We don’t have a vaccine for COVID-19 right now, but we do have a flu vaccine. We’re trying to encourage everybody to get their flu shot done.”

Editor’s note: A previous version of this article misspelled a name. It is Delaney Phelan, not Fayland. The Daily Illini regrets this error.