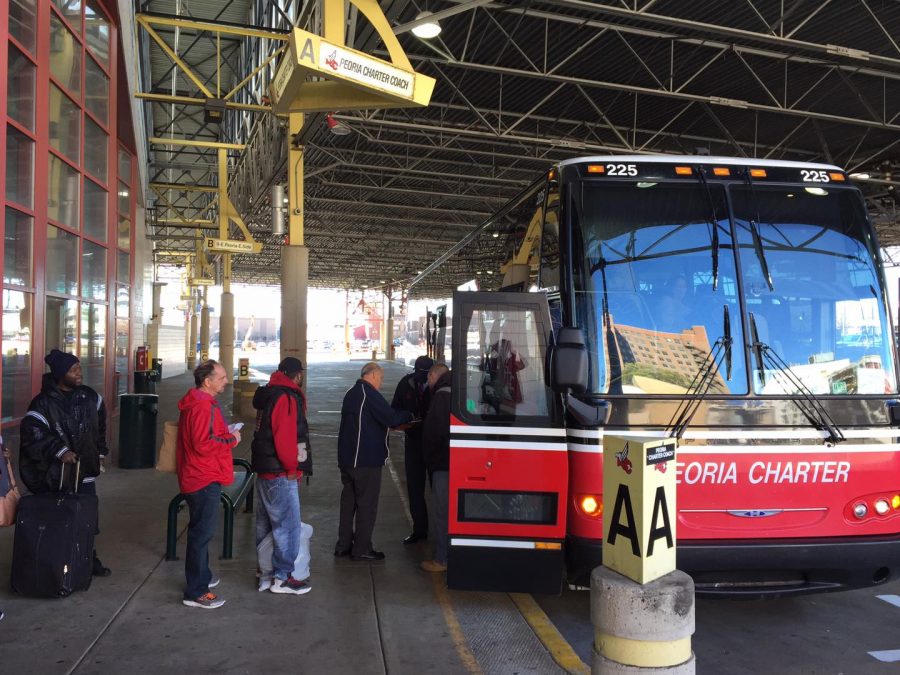 Customers board a Peoria Charter bus on Aug. 6. Peoria Charter is concerned it may be forced to close in November should they not receive federal or state aid.

The owner of Peoria Charter Coach, one of the largest bus companies in Illinois, said he’ll close down the business in November without adequate federal and state aid.

There’s a $90,000 bus license bill for the company’s 58 buses that’s been sitting on owner Bill Winkler’s desk since April. The governor has delayed the bill twice, now until the end of October.

“I don’t know if he’s gonna postpone it again, but postponing doesn’t help anything. I still owe it,” Winkler said.

Peoria Charter Coach is a major player for University transportation and the state as a whole, having driven 280,000 passengers between the Chicagoland area and central Illinois in 2019.

“The pandemic is the worst thing that could ever happen to the motorcoach industry,” Winkler said. “Because until the public feels safe indoors in a group for an extended period of time, my company and my industry will continue to suffer.”

COVID-19 has brought a series of misfortunes to Winkler’s company and industry from the very beginning.

Spring break, when the University and nation instituted a wave of COVID-19 restrictions, is typically the “Super Bowl of chartering work.” A wave of cancellations hamstrung Peoria Charter for months to come, bringing revenue down by 94%.

Winkler laid off 90% of his 130-person workforce on March 17. When the $1.2 million Payment Protection Program loan rolled in on April 15, he brought back 60 of his employees.

But their return was painfully short-lived. The $5 million in cancellations and $500,000 in returned deposits were overwhelming, while revenue barely budged. On July 15, Winkler sat in his office, unable to tell the same 60 employees they’d have to go on unemployment for the second time in four months.

He sent his vice president to share the news. A few minutes later, Winkler walked outside to face his workforce and was met with a humbling response.

“I came outside and all my employees start clapping for me,” he said. “Saying, ‘We love our jobs, we want to come back, keep fighting for us, we’re fighting for you.’ That meant the world to me.”

Winkler is “emotionally shot” at the moment. He tries to keep in touch with his employees whenever possible.

“Can you imagine what that does to your staff?” he said. “It just breaks my heart that I have to do this for them. But they have been so loyal, they can’t wait to come back.”

Winkler feels taunted by adjacent states that have lifted COVID restrictions, like Indiana and Missouri that have both moved to Phase 5 of reopening. Without a vaccine or a widely available treatment method for COVID-19, Illinois Gov. J.B. Pritzker won’t move the state into its final phase.

It’s not just the federal level where Winkler has complaints. Motorcoach companies weren’t included in the first round of Business Interruption Grants issued by the state of Illinois in August.

Motorcoach companies can now apply for part of the $220 million second round of grants, but Winkler said it only came “after many phone calls of screaming my head off.” He applied two weeks ago, right after the application opened, and is still waiting to hear back.

October is usually one of the business’s best months. Last year, off the back of Illini football, the company earned $1.6 million.

This year, the company has eight coaches set aside for ferrying fans to and from games. Even then, the best case revenue situation won’t save the company.

The Coronavirus Economic Relief for Transportation Services (CERTS) Act, provides a glimmer of hope, with $10 billion set aside for the motorcoach industry.

And yet, the act wasn’t included in the language of the second stimulus proposal brought on Oct. 1.

“If we don’t get any of this by the end of November, then, um, some big decisions have to be made,” he said. “And there is not another motorcoach company out there that wouldn’t say the same thing.”