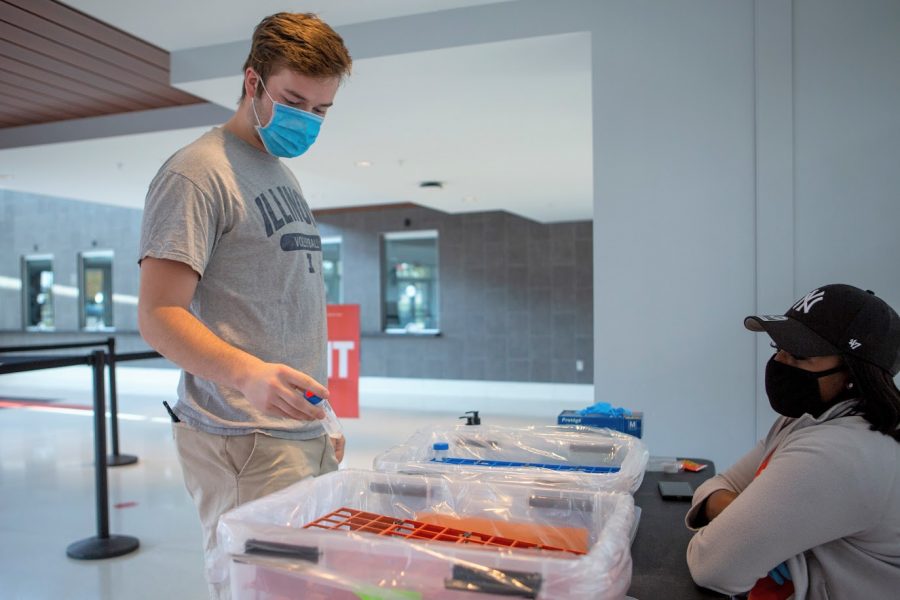 Senior Jonathan Starr deposits his completed COVID-19 test into the receptacle at the State Farm Center testing site on Oct. 8. Champaign County saw its highest daily count in more than a month, at 87 new cases.

Excluding the University’s tests, the surrounding Champaign County area reached a new high for weekly COVID-19 test positivity, at 4.41%, according to state data up to Oct. 22.

Champaign County’s rolling positivity has risen from below 3% just two weeks prior.

The surrounding Region 6 of Illinois, which includes most of the east-central counties in the state, is now at 7.6% rolling positivity excluding UI tests.

A sustained rolling positivity above 8% percent would put Region 6 at risk for new mitigation measures issued by the state.

On Oct. 14, the Illinois Department of Public Health began separating the University’s tests from the rest of the region, as officials believe the high volume of tests would artificially depress the positivity rate and cloud virus trends.

On Sunday, the Champaign-Urbana Public Health District confirmed another 87 cases of COVID-19 in Champaign County, the highest daily count in more than a month, along with 9,438 more tests.

CUPHD also reported another 63 recoveries from the virus, who are no longer contagious or have been released from hospitalization.

The active case count bumped up by 24, to 325 active cases countywide.

Champaign County’s active case count has hovered between 300 and 400 cases since mid-September.

Another 125 close contacts entered quarantine on Sunday after potential exposure to COVID-19 positive people. They must remain in quarantine for another 14 days before being released, and they will be asked to test on their fifth or sixth day of quarantine. Thirty-seven more people in Champaign County were released from quarantine

Since July, when Illinois ordered CUPHD to track the data, 9,101 people in the county have been ordered to quarantine and 1,170 of them are currently quarantining.

Hospitalizations for the virus have held at seven people for five straight days.

To date, 5,939 have tested positive for COVID-19 in Champaign County. Twenty-eight of them have died and 5,586 are considered recovered.