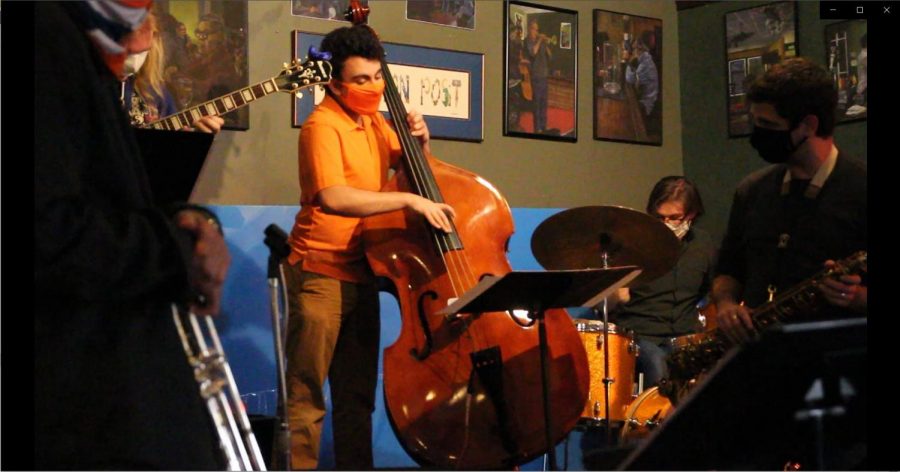 Members of Tito Carrillo’s jazz ensemble perform at the Iron Post on Oct. 20. The student musicians played for a live, indoor audience, while engineering students and faculty tracked the carbon dioxide and particles they released.

For the first time in months, there was jazz bouncing off the walls of the Iron Post, and a crowd to enjoy it.

Twenty students and faculty were admitted to the Post after showing their Safer Illinois building entry statuses. Student musicians — an instrumental group and another led by a pair of vocalists — performed through different conditions: masked and unmasked, with covers on the opening of instruments and without.

All the while, a team of University graduate students tracked CO2 levels in the bar and the number of “particulates,” or atmosphere aerosol particles, going through the air, before and after turning on an air filter and exhaust fan.

Tuesday’s performance was the grand experiment of Illinois engineering and music faculty and the owner of the classic Downtown Urbana bar, to see how ventilation techniques could keep live, indoor performances COVID-safe.

Ty Newell is an emeritus professor of mechanical engineering at the University and a longtime patron of the Iron Post. It was Bob Finch, a local lawyer and friend of Paul Wirth, the owner of the Post, who lent inspiration to this experiment.

“He said, like a lot of business owners, ‘the weather is going to turn bad soon would you mind going over and seeing what’s going on there?” Newell said.

Meanwhile, professors Thanh Huong Nguyen and Vishal Verma had been looking for a suitable campus location to collect data on carbon dioxide, airborne droplets, and airborne microbe concentrations and how they’re affected by filtration and ventilation.

Though the venue wouldn’t — in theory — contain any COVID-19-contagious particles, the study could be compounded with other research to see how likely it would be for nearby patrons to get infected given these airborne metrics.

Chip McNeill, chair of UI jazz performance, was quick to jump on the program when Newell reached out. Not only is the jazz program tight with the Iron Post, frequently performing there, but the live music scene has been in dire straits.

“Musicians, at the same time, do they have a future? Are they in limbo for months or years? Do they need to start looking for other work?” Newell said.

CO2 trackers were placed near the audience and nearer to the performers. An exhaust fan was turned on midway through each 30-minute performance, and a fan filter about halfway through the entire endeavor.

Sure enough, the exhaust brought marked dips to the CO2 concentration, while the filter dropped the particulates to a more promising level.

“As I told the musicians, these instruments are actually more costly than your instruments. They start getting into the range of a Stradivarius — they just don’t sound that great,” Newell said.

The data set is rich enough, the team believes, that it could be brought forward for funding to study at different venues and determine guidelines for more businesses.

For indoor gatherings, these metrics are all-important for controlling the spread of COVID-19.

“If I’m in a room with an infected person at 1200 parts per million of CO2 for eight hours, like a work shift, it’s like winning the lottery: I’m going to get (COVID-19),” Newell said. “But if we lower that to 800 parts per million, doubling the airflow, if I’m running recirculated air through a filter, if people are wearing a mask, I can lower that chance down to 30%.”

With future analysis and recommendations, live jazz standards and crooning could be in store for more than just the Post, just in time for the winter season.