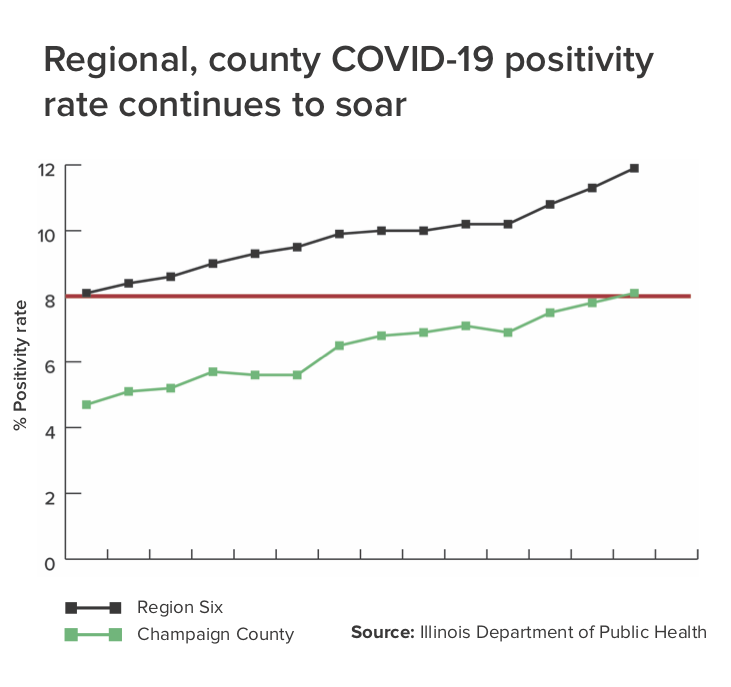 For the fifth straight day, Illinois has topped 10,000 new cases of COVID-19, blasting spring totals out of the water.

Illinois also surpassed 100,000 tests in a single day on Tuesday, a new record.

All 11 regions in the state, as defined by Gov. J.B. Pritzker’s reopening plan, have been moved back to Phase 3 as test positivity rates have surged.

Champaign County is in Region 6, alongside 19 other counties in East Central Illinois. With UI tests, the region’s seven-day test positivity is 4.2%. Without them, it’s at 11.9% as of Saturday, far beyond the 8% threshold which triggers increased mitigations.

In order to return to Phase 4 with indoor dining and other eased restrictions, the region would have to dip below a positivity rate of 6.5% for three consecutive days, excluding UI’s testing.

On campus, the virus spread isn’t great either. Last week, the University identified 360 new cases of COVID-19 among students, faculty and staff, the highest weekly total since the early September surge on campus of more than 800 cases.

When someone tests positive for the virus in C-U, they must isolate for at least 10 days before being released. Those who’ve become positive recently may not be able to immediately return to their homes for fall break, which begins Nov. 20.

Any close contacts of COVID-19-positive people must quarantine for 14 days post-exposure.

Since Aug. 15, when the University ramped up testing as students moved back in, 3,507 people have tested for COVID-19 on campus.

Meanwhile, November has brought a tidal wave of COVID-19 cases across the country. There have been more than 1 million new cases of the virus in just the first 10 days of the month.

Hospitalizations are at an all-time high nationwide, with 61,964 as of Tuesday, according to the COVID-19 Tracking Project.

Deaths aren’t where they were in April — more than 2,200 a day in April compared to about 990 per day now — but they’re a lagging indicator and steadily increasing. After surges in July, average death tolls of the virus topped 1,250 a day in early August before dropping again in September.