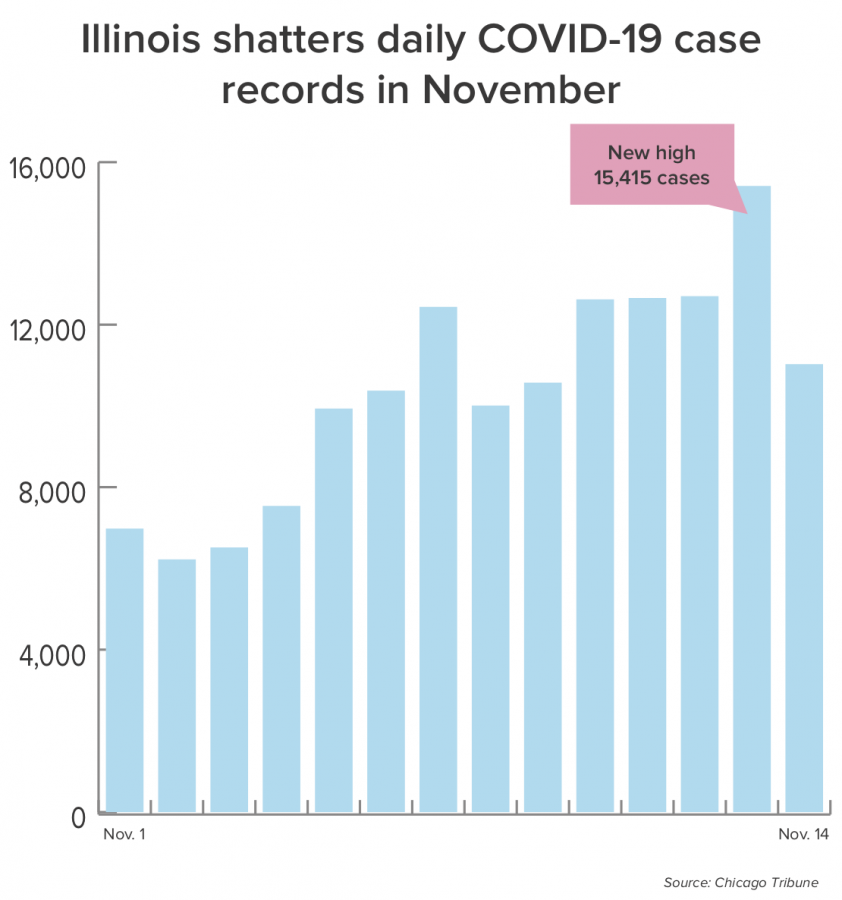 In almost every possible metric, Illinois’ COVID-19 situation is taking a turn for the worse.

Hospitalizations hit 5,415 on Saturday — another record for Illinois — and the seven-day statewide test positivity rate is up to 14.7%, up 3.3% in just six days, while the state conducts an average of 93,000 tests per day.

The Illinois Department of Public Health announced another 166 deaths from the virus on Saturday, including 66 previously unreported deaths from Friday. The last time Illinois saw more than 100 deaths in a 24-hour period from the virus was in early June, after a peak in cases in May.

A stay-at-home advisory hits the Chicago area on Monday, and increased mitigations may come to all of Illinois’ 11 regions if metrics don’t improve substantially. Illinois Gov. J.B. Pritzker extended the eviction moratorium another 30 days, up to Dec. 12.

Region 6, which includes Champaign County, is par for the course on many of the state’s discouraging virus metrics.

The region’s seven-day positivity rate was up to 13.5% as of Wednesday, excluding the University’s tests. Regional figures are updated with a three-day lag by IDPH.

After months of hovering between 2-4% test positivity, Champaign County is also seeing a surge in cases. This Wednesday, it hit a seven-day positivity rate of 9.3% from its non-University tests.

The University of Illinois hasn’t been spared from increasing cases either, though the gap in new cases from the county as a whole has widened in the last week, and many have been coming from the Champaign-Urbana community — not the other way around.

Indeed, after increases in cases among staff and faculty, non-undergrads have been ordered to test twice weekly, after months of needing only one test a week.

Chancellor Robert Jones described campus as a “quasi-bubble” in last week’s COVID-19 briefing, but the University is coming off its two worst weeks of new cases since mid-September, with 336 cases last week and 299 new cases in the week ended Friday.

Students and faculty are gearing up for the holiday season with their families, but for those who have been exposed to COVID-19 in the last week, those plans may not come to fruition.

Public health mandates a 10-day isolation period after testing positive and a 14-day quarantine after exposure to the virus.

Most students in undergraduate housing cannot return after fall break without paying a $60 daily fee, and classes are going all-online anyway. Those who return will be barred from participating in non-essential activities on campus, much like the September lockdown.

With temperatures dropping and indoor activity becoming all the more necessary, Illinois — and the nation — is heading for dark days this winter. The next two weeks will be critical toward slowing the spread and saving lives.