From tests to protests: UI’s COVID-19 semester in review 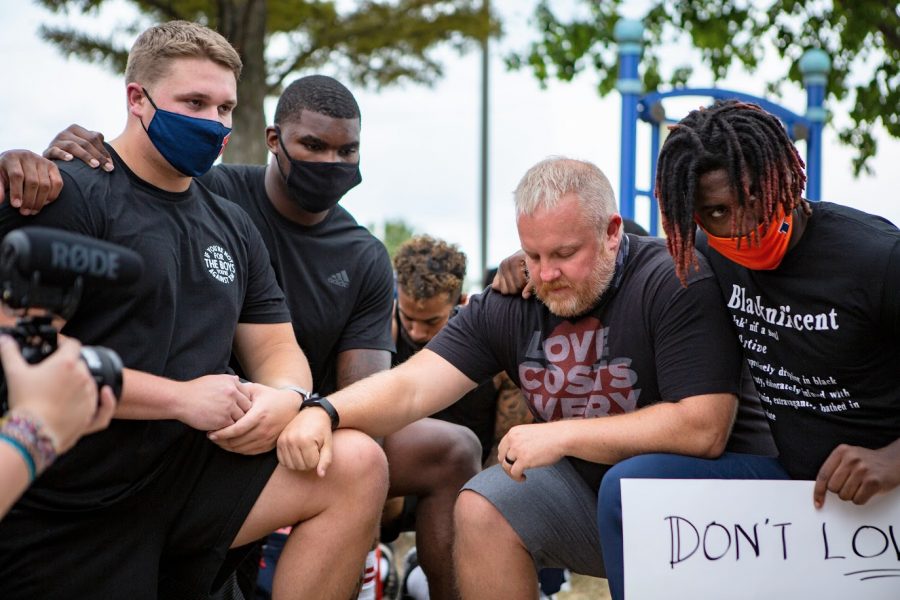 Illini football players Doug Kramer Jr., Owen Carney and Marquez Beason take a knee to honor those who have died at the hands of police during a Black Lives Matter protest on Aug 31. Hundreds of students and community members participated in local BLM protests this fall.

Despite an abbreviated in-person tenure, the University’s fall 2020 semester was anything but uneventful.

The advent of a cutting-edge saliva-based COVID-19 test by University faculty and students guided the return of around 40,000 people to the C-U campus.

What followed — “hybrid” instruction, a spike and decline in cases, a lockdown, student protests and struggles — captured national attention.

Here are the highlights of the University’s three-month rollercoaster ride:

On the eve of the first week of classes, University administrators gathered with the Shield: Target, Test, Tell team to share their plans and forecasts for the semester.

The hope: The campus population would test twice a week and avoid most unsafe gatherings, responding to contact tracers if exposure occurred. The converted Veterinary Diagnostic Laboratory would process tens of thousands of campus tests each day, returning results in a matter of hours. After a bump in cases, University and public health efforts to control the spread would curb the virus to a trickle for the rest of the semester.

University modelers nailed the number of imports; about 300 COVID-19 positive people in the entry screening of tests. What happened afterward was a murky mix of late test results, weekend social gatherings and refusals to respond to contact tracers.

COVID-19 cases swelled far beyond University expectations. By Sept. 1, after the first week of class, more than 1,200 people had been infected on campus.

University officials blamed “illegal student behavior” for the spike; students disobeying isolation orders to retest on campus, while others attended or hosted parties while being COVID-19 positive.

In the first couple of weeks of large-scale testing, the University topped more than 17,000 tests several times. Results turnaround reached up to 48 hours for some students during Labor Day Weekend.

On the Wednesday after Labor Day, Chancellor Robert Jones issued a mini stay-at-home order for the undergraduates on campus, limiting them to “essential activities.” Students in high-risk living environments were ordered to test three times a week.

In all, the lockdown slowed campus spread. By early October, the University was below 150 new cases a week — a far cry from the September surge, where 895 cases were identified in seven days.

But the damage of the surge was already done. Cases grew in late October-early November, off the back of continued campus gatherings — Illini Football watch parties and Halloween were likely culprits — and colder weather.

Though there’s little evidence that COVID-19  spread from campus to the broader C-U community, more than 3,800 students, faculty and staff have tested positive for COVID-19 just a few days before fall break, with around 95% of them being undergraduates.

Toward the end, University officials believed the spread was coming from the community into the campus, not the other way around. Increasing faculty and staff cases likely came from the larger virus trends in Champaign County and Illinois, where test positivity continues to climb.

Alongside campus COVID-19 management, University students and community members showed up in droves for the Black Lives Matter movement, while protesting several notable shootings and killings from police.

Local activists brought hundreds out for a protest near the Alma Mater after the shooting of Jacob Blake, while Illinois Athletics banded together to lead a massive BLM turn out a few days afterward.

The deaths of George Floyd and Breonna Taylor animated the C-U community over the summer as well, with thousands attending a citywide march in June, as calls for racial justice grew across the nation.

The 2020 election registered the highest voter turnout ever recorded, and so did Champaign County.

More than 95,000 people voted locally this year, eclipsing the previous record by more than 3,000 votes.

Many local and state elections hung in the balance of mail-in ballot counts, including a presidential race that dragged on for days.

University students gave a significant in-person presence, with lines stretching out of the ARC, Illini Union and University YMCA by Election Day.

The mostly online semester pushed many University students to their limits. Stories of burnout, anxiety and overwhelming workload have dragged on the back half of the semester.

Mental health vigils and resources became a staple of the fall campus presence. Rising COVID-19 cases, pre-fall break guidance and ramped up course-loadsCame have put a strain on the social lives and well-being of students.

Tens of thousands of students will return to their homes next week, leaving the quasi-bubble of campus behind for the rest of the semester. Whether a fully online finish or more time with families improves the mindsets of students remains to be seen. Many will carry on in C-U in off-campus housing.

In many ways, the last days of 2020 will look much like they did nine months ago — a nation struggling with an infectious virus, and dealing with the consequences of sequestered, online life.