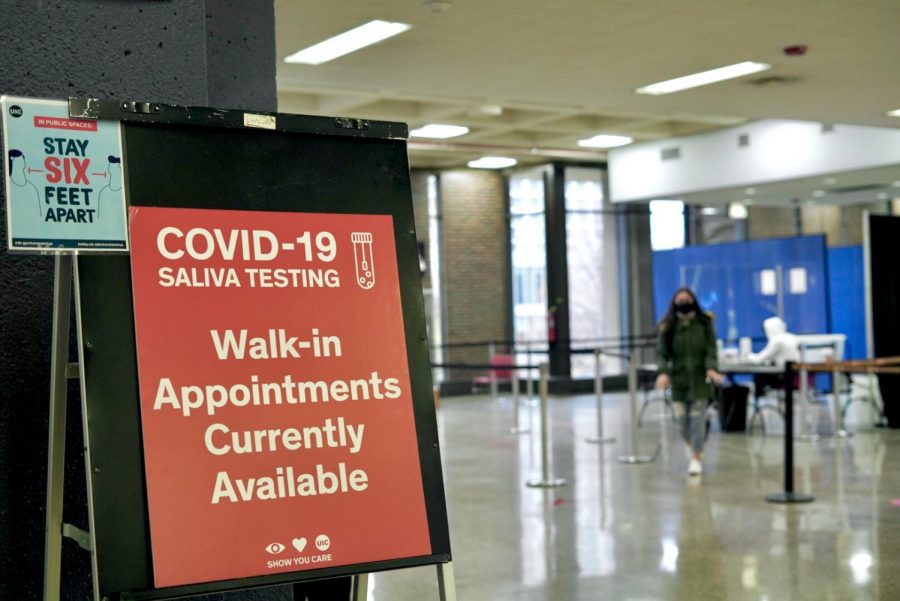 A student exits a COVID-19 testing center on the second floor of the Student Center East at UIC.

University students are unable to get tested at the two other UI campuses as of Nov. 25 after several days of conflicting information from testing officials, Illinois administration and student experiences.

Both UIC and the University’s COVID websites were updated on Nov. 24 with information regarding testing eligibility. Some UI students also successfully tested at UIC a few days prior as well as throughout the whole fall semester.

Damien Miller, supervisor at one of UIC’s testing sites, said on Nov. 24 that the sites have been seeing University students since September, often walking in wondering if they were eligible to get tested.

He also said they have seen more of UI students come through to get tested with fall and winter break coming up.

“I mean, we let them come through to test,” Miller said. “We give them no issue about it.”

Students need a UIN in order to be eligible to get the saliva PCR test at UIC that works the same way as the University’s test, but undergraduate students at Illinois or UIS are not eligible for this test.

An appointment can be scheduled online at UIC’s COVID website or eligible graduate students, faculty and staff can go to a designated walk-up testing location.

But Robin Kaler, spokesperson for the University, said in an email on Nov. 23 that Illinois students are not eligible to be tested at UIC because the testing capacity at the Chicago campus was not designed to accommodate Urbana students.

Kaler said that only faculty, staff and graduate students from the Urbana campus who are based in Chicago for work or research activities are able to test at UIC.

With many University students living in the Chicagoland area, some questioned whether they could take advantage of the testing program at UIC.

Celeste Mora, junior in LAS, contacted UIC’s COVID-19 email, which she found through the MyMcKinley portal, on Nov. 20. She lives in Chicago and her mom, who is employed by UIC, suggested she find out if it was possible to get tested at the Chicago campus.

“I just want to make sure that we’re being really safe,” Mora said. “Although I did test everyday last week to make sure I was safe coming home, I feel like there’s still a chance I could still catch it going anywhere.”

UIC’s COVID-19 testing email informed Mora that she could visit one of their walk-in sites or schedule an appointment ahead of time.

Mora shared a screenshot of her email on social media, which quickly spread among UI students.

Mora planned to visit a walk-in site on Nov. 24 without scheduling an appointment and was turned away by testing officials despite having an email stating she would be able to test.

“A lot of us were depending on their saliva testing to stay safe and keep our families safe, but mostly just have peace of mind for the best two months,” Mora said.

Sophia Pizarro, freshman in Engineering, saw Mora’s screenshot circulating on Snapchat and decided to get tested as well. She lives in Chicago, an hour-long train ride away from UIC.

Pizarro originally scheduled an appointment on Nov. 24 at 1:55 p.m. but arrived early and was able to get tested without any issues.

“Being able to get tested off-campus makes me feel more secure about making sure I don’t spread anything to my family after coming home from college,” Pizarro said.

On Nov. 23, Nicole Dillie, freshman in LAS, saw the same screenshot and scheduled an appointment for the morning of Nov. 25 because she had a possible COVID-19 exposure and also wanted to continue frequently testing while at home.

Dillie lives an hour away from the Chicago campus in Wheeling, Illinois, and said she received reminder emails leading up to her appointment time.

She swiped her i-card at the testing location at Student Center East and was informed she wouldn’t be able to get tested after being confirmed as a UI student.

Dillie instead received a piece of paper with an email and phone number to contact with questions about why she couldn’t get tested at UIC.

She was told by the UI COVID-19 Wellness Answer Center that the website and rules were just updated the day before.

“I didn’t receive an email warning or a cancellation email,” Dillie said.

“People from the Urbana-Champaign campus that I know had gotten tested at UIC not even 24 hours before I attempted to, but since the rules were changed in between, nobody else was made aware that we could be turned away,” she said.

Dillie said that because of the change, she plans to get tested a few times during break by traveling to Urbana-Champaign.

As of Nov. 24, both the UIC and the University’s COVID-19 testing websites say that students cannot test between different campuses.

“Effective Nov. 21 and through Jan. 25, Urbana-Champaign undergraduate students are not eligible for on-campus saliva testing at the Chicago campus for the rest of the Fall 2020 semester or during the winter break,” the UIC site states.

For many students, the frequent testing available at the University made them feel safer and suddenly not being able to do so because of the break was an adjustment.

Dillie said she is worried about all of the holidays and the possible gatherings that will take place during this time, but also for the students who can no longer have easy access to a rapid test.

“I know that some students may not be willing to take the alternative test or may not even have access to it due to lack of health care,” she said. “Not many people may be able to drive down to Urbana-Champaign to continue testing either.”

Pizarro noted that tourists aren’t affected by the rising infection rates and Chicago residents will be impacted as a result.

“People will assume that because they’re home or not on campus, they don’t have to be as careful, or they can see whoever they want over break without any health consequences,” Pizarro said.