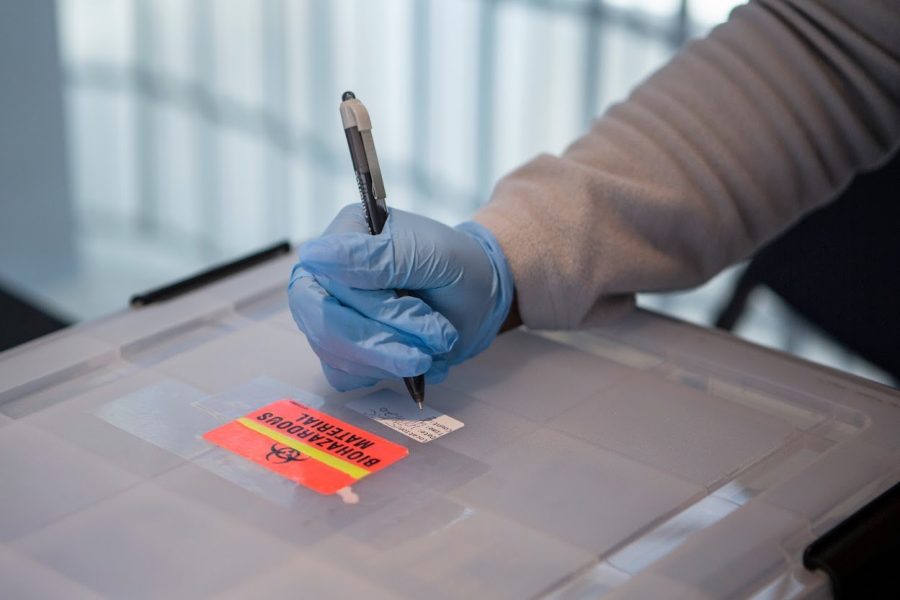 The process of distributing vaccines to the eligible population has begun in Champaign-Urbana despite transparency issues from the federal government. The Champaign-Urbana Public Health District, which oversees the community’s vaccine distribution program, is currently distributing vaccines to healthcare personnel and long-term care facility residents as part of phase 1A of its vaccine distribution program.

Brandon Meline, logistics chief at CUPHD, is part of the team that oversees vaccine distribution throughout the CU community. Meline and his team have been successfully working to get the first doses of the vaccine out despite short notice and limited supplies.

“The limited vaccine has been the biggest barrier to distribution right now, and the (lack of) transparency about knowing what we’ll be getting from week to week and being able to plan accordingly,” Meline said. “The transparency from the feds down to the state is pretty limited on the allotment. We’re not ramping up in volume as quickly as we thought we would. The limitations in the planning and distribution are based on how many vaccine doses we get and when we get them. We’re not able to really forecast out too far in advance, we’re pretty much working week to week right now.”

Despite short notice regarding allotment of vaccine doses, CUPHD has successfully overseen the distribution of 6,011 vaccine doses as of Jan. 5, according to the CUPHD COVID vaccinations homepage. Of Champaign County’s eligible population, which includes all individuals over the age of 16, 3.5% have received their first doses of the vaccine.

A major issue associated with vaccine distribution is deciding who gets the vaccine first. The Illinois Department of Public Health has divided the eligible population into three phases, with the first phase being divided into three sub-phases — 1A, 1B and 1C. Illinois is currently in phase 1A of the vaccination plan, which includes healthcare workers and those in long-term residential care such as nursing homes.

The IDPH plans to vaccinate as much of phase 1A as possible before moving onto the next phase. Although regions like Champaign County will have some autonomy during the later phases of the plan, Meline and CUPHD will have to wait to get the green light from the state until they move onto phase 1B. Phase 1B, which Meline estimates will begin within the next couple of weeks, includes essential frontline workers such as law enforcement, food service workers and public works officials.

“We’re in the planning phases of getting folks in phase 1B (vaccinated) probably within the next couple of weeks,” Meline said. “We have some local flexibility on how we do things, but the state is trying to do it all as one thing, which, with different population centers, can be difficult.”

Another challenge associated with distributing the vaccine to the community is the uptake rate or the percentage of the eligible population that decides to take the vaccine.

The majority of University students will be vaccinated during phase 3, in which children over the age of 16, young adults and the rest of the general public will be eligible to receive the vaccine. Although the future is unclear due to limited information about vaccine allotment rates and uptake rates, Meline believes that the student population will be eligible to be vaccinated by April.

“My hunch is that it will probably be sometime in March or April before folks leave for the end of the semester. The students are going to be all the way down in phase 3, especially all the healthy ones if they don’t have any chronic medical conditions that make them high-risk,” Meline said. “The healthy typical 18-year-old freshmen or sophomore is going to be later in the spring, but I think we’ll get them vaccinated before the end of the year.”

According to McKinley Health Center director Robert Parker, McKinley will be partnering with CUPHD to distribute the vaccine to sections of the student population once they become eligible. According to preliminary plans, the I-Hotel and Convention Center, located south of the State Farm Center, will be converted into a vaccine distribution center. Another vaccine distribution center will be at Market Place Shopping Center located in north Champaign.

According to Parker, the University’s COVID-19 testing program will continue throughout the rest of the semester, regardless of the vaccine’s availability.

Rebecca Lee Smith, associate professor in veterinary medicine, whose research focuses on infectious disease control. Smith explained the challenges associated with distributing a vaccine to a large population, such as the CU community.

“Getting to a vaccine is the first step, the actual getting the vaccine into people’s arms is far more complicated,” Smith said. “The question of prioritization is the first one we have to talk about, whether we prioritize people who are most exposed or people who are most likely to be affected by getting infected. The current system usually does a little bit of both. Those two groups are the easier groups to vaccinate because we know who they are. The next steps are going to get more complicated, and as we go on it gets more and more complicated, of identifying who are the next priority individuals, and make sure they get access to the vaccine.”

“My networks on Twitter have been commenting on how indicative the entire process is of what we’ve seen for years,” Smith said. “The basic research is extremely well-funded and well-publicized, but the practical measures of getting the work out there and in use are under-funded and somewhat neglected.”

The lack of federal funding and organization has had its effects on Champaign-Urbana. Meline has cited short notice and lack of transparency as the main issues with running the COVID-19 vaccine distribution program at the county level.

“The rollout from the (federal government) on down has been a little bit lacking in transparency, and it has been making it really difficult to answer questions about whether or not we’re going to have a vaccine clinic later this week, because we don’t know if we will or won’t have the vaccine,” Meline said. “That makes it tough.”