Should I stay or should I go? Freshmen mull second semester returns 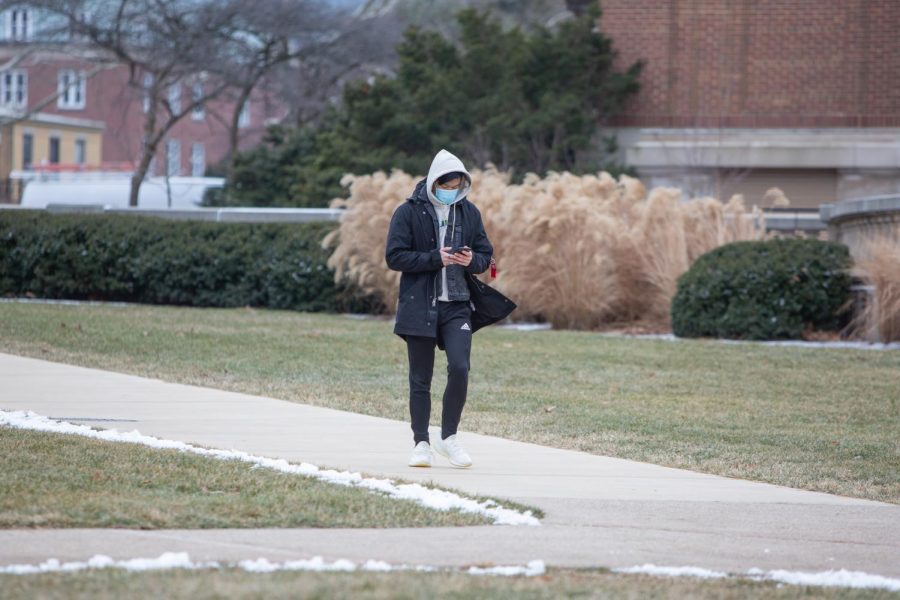 A masked student walks down a diagonal pathway on the Main Quad on Wednesday morning. Many Illinois students wrestled with the decision to return to campus this semester.

As the spring semester begins, freshmen students are making decisions about being on campus or choosing remote learning after starting college in the midst of the COVID-19 pandemic.

Decisions included moving on campus for spring after staying home for fall, choosing all remote learning or returning home after being here for fall.

Nadya Widjaja, freshman in Engineering, stayed home in Jakarta, Indonesia, in the fall but decided to come on campus for the new semester.

“It feels amazing to be on campus,” she said. “Although I’ve only been here three days, I have met a few of my friends, safely of course, and everyone is just so welcoming.”

Widjaja’s main reason for moving now was the challenging 13-hour time difference between Jakarta and Champaign-Urbana for online learning.

Having a class at 3 a.m. isn’t at all productive and affected sleeping and eating, she said.

Widjaja didn’t come for fall because the U.S. Embassy closed and her student visa wasn’t processed.

Other students chose to come to campus this semester because of University changes to housing policies.

The change stated that students still need to fulfill the requirement of living on campus. Everyone is encouraged to live on campus given the success of the fall semester, the housing website states.

Younis Nooraldeen, freshman in LAS, said he would have to live in University Housing his sophomore year if he didn’t move on campus this semester.

It was the deciding factor for him, but he probably would’ve still come if the policy wasn’t changed, he said.

Nooraldeen stayed home in Naperville, Illinois for the fall because he believed being on campus with all the restrictions wouldn’t be the full college experience.

COVID-19 was also a concern but he said he feels safer on campus these days with the frequent testing and safety precautions.

Madhu Vakkadala, freshman in Engineering, also moved on campus from Dallas, Texas after hearing the policy change. She would’ve stayed home for the spring if she could because of concerns about COVID-19.

“It’s sort of scary to go outside and do anything in public, but I would also prefer getting an apartment sooner rather than later,” Vakkadala said. “So having to only stay one semester instead of an entire year just seemed like a much better option.”

Students choose to stay home for the spring semester.

There are also some students who are choosing to finish the year remotely, whether they were online or on campus in the fall.

No official data currently exists for the number of students doing remote learning or are on campus, Robin Kaler, University associate chancellor said.

Compiling this information is often difficult and is not as easy as it seems, she said.

“We find that in COVID, many students don’t make the decision of whether to return to campus until the semester has started,” Kaler said in an email.

For Josie Mendez, freshman in LAS, saving money and the pandemic were the main reasons for staying home both semesters.

It didn’t make sense to pay for dorm living but have all online classes, Mendez said.

Mendez also admitted that staying home for her first year has been hard for her mental health.

“It’s still hard to be physically distant from people and overall lack a big sense of community,” she said.

“It does make me a little sad that I’m missing out, but I do keep in mind often that plenty of other students are in the same predicament I’m in,” Mendez said.

On a positive note, she said doing school from home is productive and free of distractions. Staying home in the fall has helped her learn to balance home and school better, Mendez said.

Jackson was on campus for the fall and decided to move home to Chicago this semester.

“There wasn’t much motivating me to be on campus,” she said. Another main reason was to save money.

Jackson said she’s excited and relieved to be home because she has new projects to work on, like redecorating her entire apartment space.

As for the pandemic, it was a concern for her at school, but unavoidable in a city like Chicago, Jackson said.

Students, whether remote or on campus, aren’t concerned academically, but rather about the pandemic and socializing.

If anything, doing schoolwork in a dorm will be better for some.

“Being in a dorm, it’s going to hold me more accountable and be more responsible,” Nooraldeen said.

He also said he’s a little worried about meeting new people, as there are already established friend groups.

But he’s optimistic because “it’s a new environment so it just takes time to get used to.”

Widjaja is also concerned about meeting new people but not having deep connections.

“Getting to know someone is harder than usual,” she said.

Her favorite activity since coming on campus is exploring the school and walking around, saying she’s had a healthier lifestyle since being here.

“I want to know the many places and buildings around my housing and beyond,” she said. “There are still a lot of things I have yet to do.”