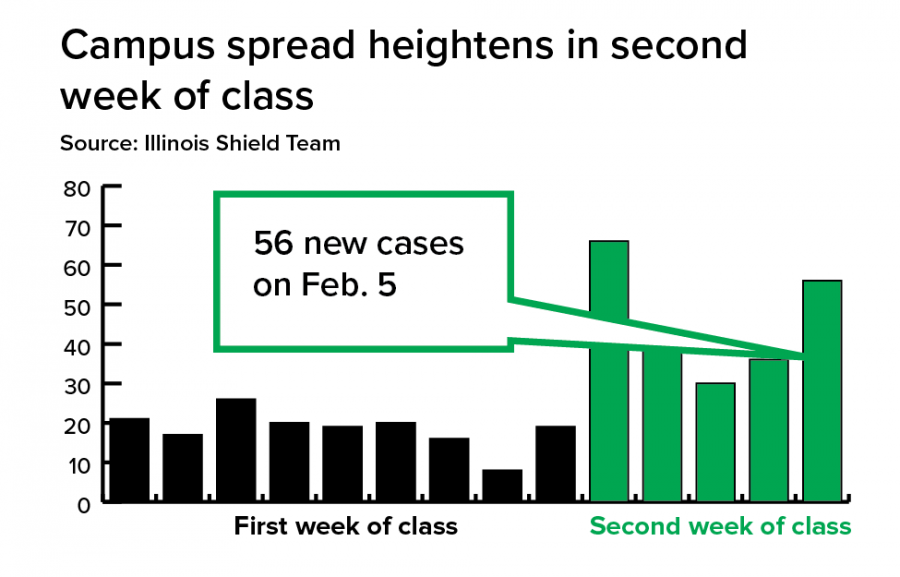 After a favorable start to Illinois’ spring semester, the University’s COVID-19 numbers took a turn for the worse last week.

The second week of class brought 256 new cases of COVID-19, almost double that of the first week on 3,000 fewer tests.

Campus leadership hoped the weeklong screening period built in to the semester would curb the spread from returning students, flattening new cases to a trickle and getting ahead of more contagious COVID-19 variants.

However, the second week’s rise in cases confirms significant campus spread of the virus, where those who caught the virus elsewhere have brought it into the community.

The picture of spread on campus is still far better than fall semester. By the second week of class, 1,530 people had already tested positive for COVID-19 on campus.

Regardless, the University’s president Tim Killeen forecast “300-500 cases” to start the semester, which depending on the timeframe, Illinois may have already exceeded.

More than 20 cases of the contagious B117 virus variant have already been identified on campus.

The Champaign-Urbana Public Health District processed another 10,153 tests on Sunday, which brought back 72 new cases. Countywide, 673 people are considered “active” cases by the county, still ordered to isolate for the virus.

Since the pandemic began, 16,906 county residents have tested positive for COVID-19 and 112 have died from virus complications.

The four counties that rank ahead in doses — Cook, DuPage, Lake and Will — all have more than triple the population of Champaign County. Additionally, Adams, Calhoun, Piatt and Fulton counties, which have all fully vaccinated a higher percentage of their populations, have less than a third of the people that Champaign County does.

Statewide, around 2.24% of Illinois’ 12.7 million people have received both doses of a vaccine.