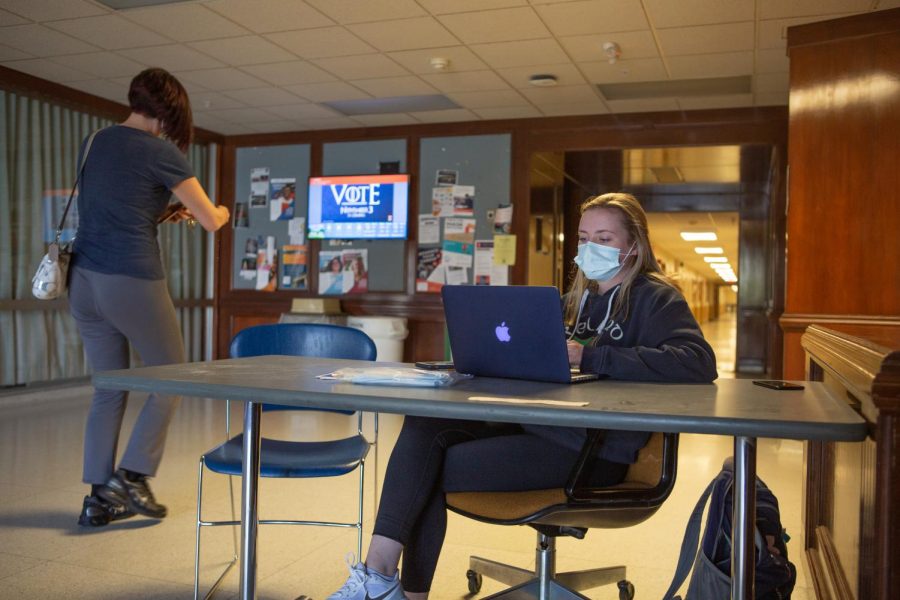 A University Wellness Associate checks a woman into Bevier Hall on Oct. 14. Students and faculty are unable to enter University buildings without building access being granted through the Safer Illinois application.

University officials and SHIELD members have concerns about COVID-19 variants and pandemic fatigue and have used information from fall semester to guide spring plans.

“What we really need over the next few weeks is that we need to redouble our efforts to protect ourselves and all the folks around us,” said Bill Sullivan, SHIELD member and Director of the Smart Healthy Community Initiative.

Above all, figureheads in the University’s COVID-19 response team said the emergence of different COVID-19 variants is the biggest fear, and the next few weeks are crucial.

As of Thursday, there have been 11 confirmed cases on campus of the new COVID-19 variant that originated in the United Kingdom, known as the B117 lineage, according to Nigel Goldenfeld, professor in Grainger and COVID-19 modeler for the University.

Another seven individuals are being re-tested for the B11 variant.

He said the variant’s increased transmissibility and new evidence that it is more dangerous than the current strain is what keeps him up at night.

“You’ve got a double threat here,” Goldenfeld said. “You’ve got something that is worse and is more transmissible and a (campus) population that is not compliant with public health recommendations.”

Goldenfeld is part of a team that creates data models to help guide SHIELD’s testing program. Last semester, he said his team was surprised at the lack of student compliance with testing.

After the surge in cases in fall, Goldenfeld said they added non-compliance into the data models, and this guided the spring return to campus with staggered arrivals and the initial lockdown.

Additionally, University officials announced new consequences this semester to non-compliance such as internet cuts and loss of access to Zoom and other educational platforms.

Goldenfeld said even within the past week, he’s seeing individuals test for the first time in all of 2021.

“I think trying to enforce compliance where appropriate is an essential thing to do,” he said.

Updates to the Safer Illinois app have also been made after learning from the fall semester, Sullivan said. Sullivan is the head of Rokwire, an open source platform that developed Safer Illinois.

As vaccinations become more available to the campus community, Sullivan said his team is working on a vaccine feature for the app. They want to include a feature to help people keep track of their upcoming appointments.

However, there are challenges to this because it’s unlike the saliva testing data, which is conducted on campus and goes through McKinley, done “all in-house.” Vaccinations can be done at any healthcare provider, not exclusively on campus.

It’s their primary challenge at the moment as well as prioritizing user privacy, Sullivan said.

“It’s not nearly as simple or as direct because the data are all over the place,” he added.

In regards to user privacy, Sullivan said the app’s privacy features are something he’s very proud of. The app administrators don’t have access to testing data because of the way it’s encrypted, he said. This data is only available to University administrators who handle positive cases, as well as track testing non-compliance.

Sullivan and his team are also working on a new app that will allow family members of University employees to get tested, called Safer Community. Although it’s not yet released, Sullivan anticipates it will be out this week and said he’s very excited about opening the University’s testing capabilities to the surrounding community.

Safer Illinois is commonly used as a way to attend in-person classes; students have to show their status at the door in order to enter any University class. Robin Kaler, University spokesperson, said there are 2,200 in-person sections this spring, slightly less than in the fall.

Building monitors are students hired by the University to check class attendees’ statuses at the entrance of each building.

Kaler said there weren’t any drastic changes to the way building monitors are organized.

Maddie Shannon, freshman in AHS and currently employed as a building monitor, said there weren’t any changes between her responsibilities last semester and now.

She said she received a vague email at the end of fall semester, thanking her for her work and saying that the University would let her know about hiring for the spring.

Kaler said over 90% of building monitors returned for the new semester, and new monitors were hired to fill the vacancies.

As B117 cases are likely to increase, Goldenfeld recommends that everyone double mask.

“It’s the cheapest, quickest and easiest way to slow down the spread of COVID,” he said.

A study by University researchers also supports this practice.

Additionally, eating with others can be dangerous and lead to superspreader events, Goldenfeld said.

The Ikenberry Dining Hall and ISR Dining Hall opened up for limited indoor seating on Thursday, much to Goldenfeld’s concern.

While restaurants and dining halls are opening up, he said that “the levels are not down low enough that you can say there’s still no transmission.”

Sullivan said he recognizes the challenges at this time, especially as spring approaches.

“All of us are going to want to do the things that humans do, especially as the weather gets warmer, and we’re just feeling the joy of spring,” he said. “It’s going to be hard.”

Goldenfeld said that we don’t want to undo the work we’ve already done. “This is worth hanging in there for,” he said.

“We may have pandemic fatigue,” Goldenfeld said. “The virus does not.”