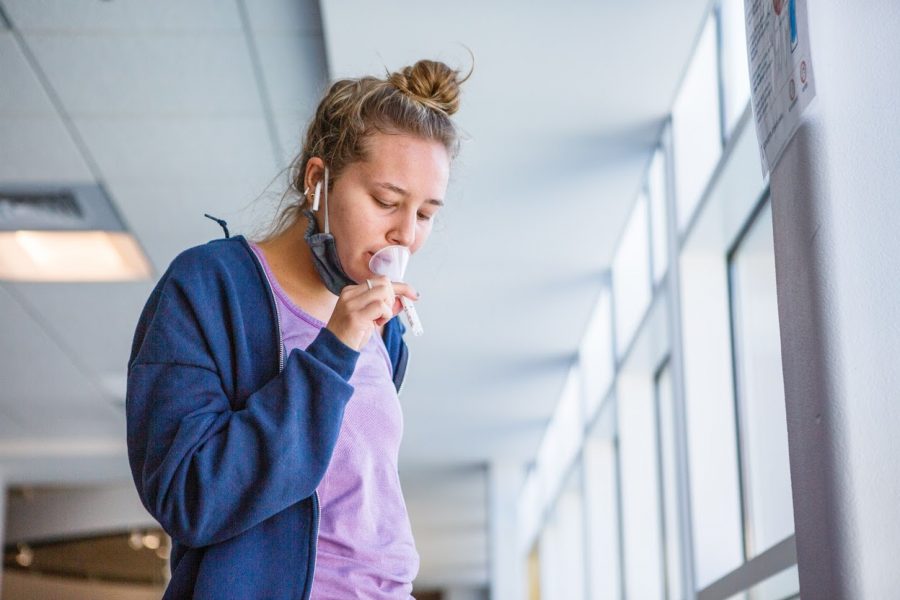 Illinois student Samantha Rubin takes a University COVID-19 test at the ARC on Feb. 1. The testing method may soon expand to more places in the local community.

As the University works on expanding COVID-19 saliva testing to the surrounding community, some locals are looking forward to being able to take advantage of the new opportunities.

“We are hopeful that within the next couple of weeks, working with our community partners, we will start testing first responders, some employees of local governments and schools, some underserved groups and dependents of university employees,” University spokesperson Robin Kaler said in an email.

John Garvey, French teacher at the University of Illinois Laboratory High School, said this will be a good thing for the community.

Employed by the University, he said his family would take advantage of this opportunity. Garvey tests biweekly through the University and received the first dose of the COVID-19 vaccine through the school as well.

“I think it’s very efficient, very accurate,” Garvey said. “I think it’s great compared to what the general public has to do to even get a test.”

His wife, Barbara Oehlschlaeger-Garvey, works as a program director for the Champaign County Forest Preserve and was vaccinated through the local health department.

Oehlschlaeger-Garvey said if she hadn’t been vaccinated, she would definitely get tested, but she thinks this will be a great service for the surrounding community.

“It would really be a boon to the community,” she said. “Testing is key.”

Oehlschlaeger-Garvey said she and her husband, in their 60s, worry about their health more these days.

“We’re right at the cusp of being the really protected people (at age 65),” she said. “I’m at the top of the younger people. Not that that’s young.”

Garvey said from his perspective as a teacher, he imagines a lot of students at the high school who likely have family that work at the University will make use of testing if it becomes available.

His only concern is that people are starting to become too complacent too quickly, he said.

“I think it’s a great opportunity for the University to share a great resource that they invented on campus,” Bronowski said. “It can help a lot of people with regular, rapid testing that’s easily done and is less invasive than some of the nasal stuff.”

Bill Sullivan, SHIELD member and part of a team that helped develop the Safer Illinois app, told The Daily Illini last week that the University is trying to create a new app to support this community testing.

Kaler also said that there are a lot of “logistical and technical issues” when it comes to trying to expand testing.