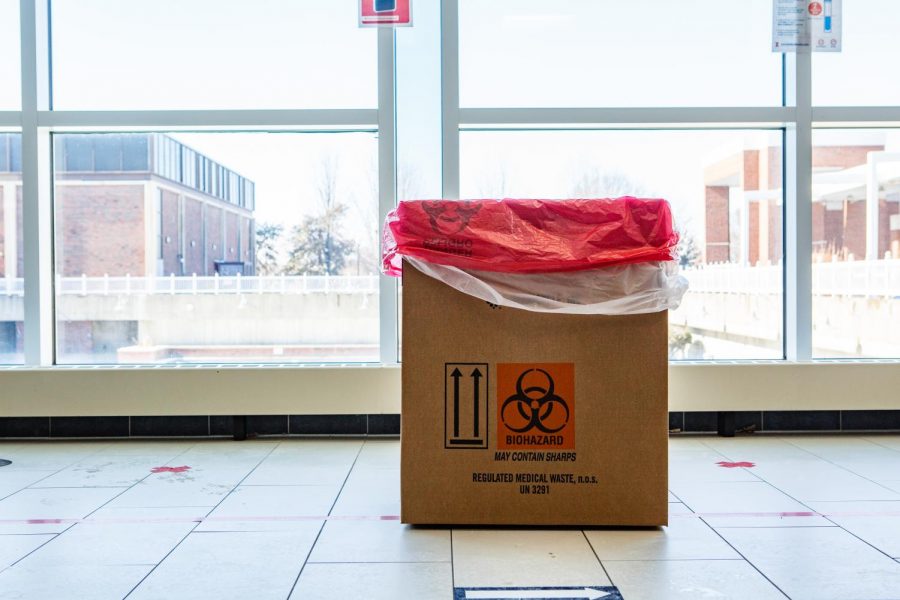 A biohazard trash stands in the middle of the ARC for students to dispose of COVID-19 testing materials on Feb. 1. Illinois graduate students are concerned about a lack of information from the University about COVID-19 disciplinary actions.

Graduate students want more clarity from the University about how COVID-19 discipline is being handled, as well as more information about testing guidelines.

Angela Ting, a master’s student in FAA and a representative for the Graduate Employees’ Organization, said it’s been hard trying to advise students because the testing guidelines are not clear.

“The discipline regime, or structure, is just not clear at all,” Ting said. “So people are being threatened with different disciplinary actions.”

The organization has had five graduate students facing disciplinary action for COVID-related infractions reach out to their grievance committee, four of which live in University Housing. The fifth case was Ivor Chen, who lives in an off-campus apartment.

Kai Shinbrough, doctoral student in LAS and GEO representative, said the number of students they’ve had reach out is another issue because they don’t know exactly how many graduates are facing disciplinary action because the University is not telling them this information.

Lack of communication for students in University Housing

GEO representatives said the overall lack of information from the school concerning COVID-19 testing guidelines is unclear, especially for graduates and their dependents in University Housing.

“We’ve heard from a lot of students that are worried, trying to do the right thing but not really sure what the right thing is,” Elinor Fujimoto, doctoral student in AHS and GEO representative, said.

Even though these are the guidelines, it’s largely unclear what happens if their dependents fall off the testing schedule, Fujimoto said.

“Does that reflect on the student?” she said. “Does that lead to discipline? That’s just one of the glaring omissions that we’ve unfortunately not been able to answer to any capacity for people.”

People also have different dependents of different ages and abilities. Some of them are older or more vulnerable to COVID-19 for underlying reasons, which makes it difficult to test sometimes, Fujimoto said.

Fujimoto said the GEO is hoping Chen’s widely-publicized situation and resulting campus support will cause more students to reach out to them for help.

“In the face of no information from the University, we only know what’s happening because people are reaching out to us,” Ting said.

Brown said the overall disciplinary process for testing noncompliance is the same for any other Student Code violation and applies to undergraduate, graduate and international students.

“It really seems to us like these disciplinary procedures were written up with domestic students in mind, and the University just threw international students into those same procedures,” Shinbrough said.

Dismissal could disproportionately impact an international student if they’re relying on being a part of the school to stay in the country, he said.

Chen said in an email that if some kind of external oversight can be introduced that would be a great improvement.

“Of course the University should have power implementing its own rules and regulations, but this power should have boundaries,” Chen said. “(The University’s) power over students’ destinies is frankly immense.”

Kaler said that information related to COVID-19 testing requirements has been shared repeatedly with students on “virtually every university communication channel.” Channels include the campus Massmail, the University COVID-19 website and GradLINKS — a newsletter sent to graduate students every Sunday.

“Students who choose to be in the community during the pandemic are responsible for learning and following the policies and protocols designed to keep everyone as safe as possible,” she said.

“The University has said that they’ve tried using all of the means of communication available to them, but still there appears to be this disconnect,” Shinbrough said.

Shinbrough said the only thing they’ve been able to tell graduates that reach out to the GEO for help is to follow what guidelines are available from the school.

“Unfortunately, the only thing we can tell grads to do is to follow the University procedures as well as anyone can because the consequences can be so unexpectedly dire,” he said.

And for students facing disciplinary action, the GEO has advised students to accept the sanctions “because we don’t know what’s going to happen if things escalate and (they) try to dismiss you,” Fujimoto said.

Additionally, the GEO has been encouraging and helped graduate students request testing exemptions.

Ting said it’s also not clear what sort of situation allows an exemption versus what doesn’t, but living with dependents at high risk, working 100% remotely or living too far from a testing center have been working for some.

As of Feb. 25, 645 exemption requests have been received in the spring semester and 408 have been approved, according to Kaler.

Overall, GEO representatives said they’d like clearer information about what infractions lead to what sort of discipline, similar to how teaching assistants use rubrics to ensure fairness with grades.

“I think that they should be very hesitant about disciplining people just because of that lack of communication given that the lack of understanding of protocols is so widespread,” Shinbrough said.

But ultimately, Shinbrough said graduate students should have representation on the University committees that make disciplinary decisions.

If in the beginning, a member of the GEO was on one of these committees, this whole situation of communication and unfair discipline could’ve been avoided, he said.

“The University should give us a seat at the table,” Shinbrough said. “I think that’s really critical going forward.”