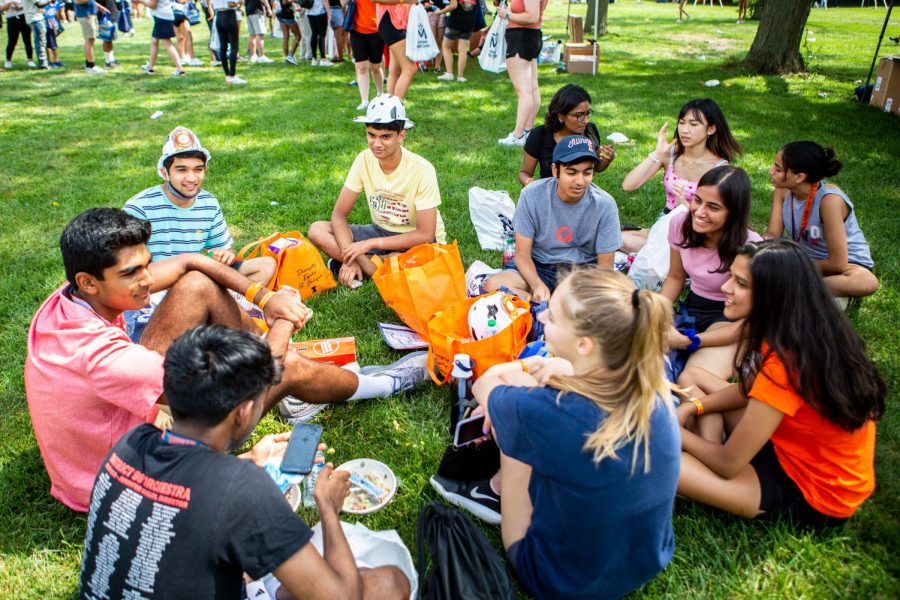 Students congregate without masks during the Welcome celebration in Lot 31 after new student convocation on Aug. 20. Covid-19 cases have begun to decrease after the initial surge at the start of the semester.

This week, the recent surge of COVID-19 cases on campus has declined from the initial surge at the start of the semester.

In comparison with the rest of Champaign County, the areas surrounding the University campus are by far the most affected.

In comparison to the rest of the state, Champaign-Urbana has transmission rates on par with some of the state’s other large cities. Nationally, the University seems to be a part of the rising trend in COVID-19 cases.

In Champaign County, 161 positive cases were counted on Sept. 12. Most of the transmission is localized around the center of the University campus.

The zip code region of highest transmission encompasses much of the University campus, with the second most densely-infected regions located directly adjacent to this epicenter.

Few regions farther away from the University, on the other hand, have active cases ranging from single to double digits.

In comparison to the rest of the state, the Illinois Department of Public Health records 4,194 statewide cases as of Sept. 14.

According to data from the IDPH, the area of highest transmission is Chicago, however when compared to Chicago’s outlying suburbs or other large cities such as Peoria or Springfield, Champaign County matches the amount of confirmed cases.

All counties in Illinois are listed as “high transmission” on the IDPH website.

According to the Centers for Disease Control and Prevention, Champaign County has been declared an area of high transmission, along with the majority of the country.

However, hospitalizations remain relatively low in comparison to the rest of the country, accounting for just 0.2% of cases.