Couples come together to enjoy Ebertfest 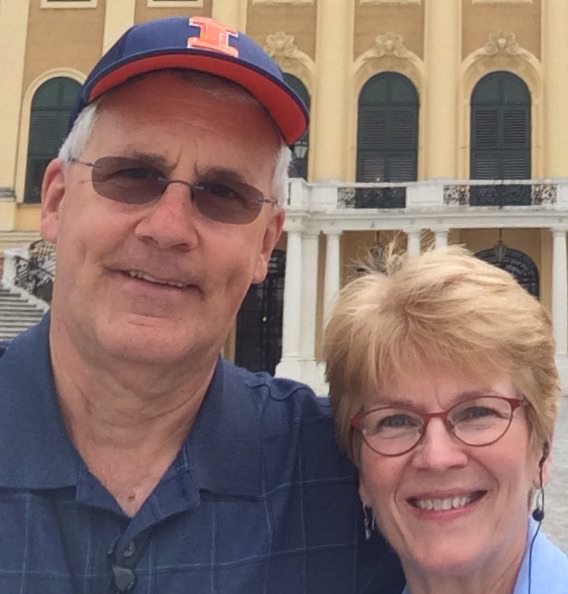 Van and Kathy Bowersox, Champaign natives, have been avid Ebertfest-goers since 2011. They think of the experience as a “continuing education” in their retirement.

One of the aspects of Ebertfest that makes it so special is the people in the seats.

Some festival-goers are Champaign-Urbana locals, others are dedicated fans from out of town, and there are also University students who venture off campus and experience the world of Roger Ebert for the first time.

Ebertfest means something different to every attendee. Here are two couples who have found a special connection to the festival over the years.

Kathy and Van Bowersox from Champaign

This local couple was always intrigued by Ebertfest, but it was not until after they retired in 2011 that they became avid attendees.

Kathy, who was a high school French and English teacher at Mahomet-Seymour and Centennial, and Van, who worked for the Illinois State Water Survey, would occasionally attend the evening movies after work. In 2011, they finally had the time to see the festival in its entirety.

Kathy said Ebertfest has become a “continuing education” for them in retirement. They especially love the documentaries and foreign films.

“We really like true stories. The older I get, the more I enjoy documentaries. I think there’s a lot to be learned about our world from taking the time to watch documentaries,” she said. “I feel we have a responsibility to see [foreign films] because we need to be aware of things happening in other cultures that are not our own.”

The couple also loves Ebertfest because they get the opportunity to see movies that would not typically be shown in local theaters. For instance, they can only see documentaries a few times a year at the Art Theater in Champaign.

“Most of the movies shown there are not high-budget films in Hollywood today,” Van said. “Instead they are more in touch with the human emotions, human experiences. They are just very much down to earth, things that we can relate to.”

Van said he looks forward to listening to producers, actors, directors and others that arrive in Champaign-Urbana to discuss the movies during the panels afterward. He said there are also many knowledgeable people in the audience who ask good questions.

The couple loves spending Ebertfest with their friends Diane and Gary Stensland, who helped persuade them to be committed festival-goers.

“This is a pretty big commitment. All four of us hang out together, go to dinner together on Thursday, Friday, Saturday. We have a lot of fun,” Kathy said.

Some of the couple’s favorite movies from Ebertfest over the years include the Japanese film “Departures,” the Polish film “Ida,” and the documentary “Moving Midway.”

“Roger Ebert found some gems that never would have made a lot of money but they were just incredible stories,” Kathy said.

Kathy and Van both feel that Roger’s impact is still apparent during the festival.

“He did his work so diligently that he kept writing, he kept reviewing, his passion for movies and for the business of empathy, that we experience, in characters and films. He had such a deep understanding of that,” she said. “I think I always look forward to keep learning from him. I think we’re lucky to learn from him and that Chaz has kept it going because we understood that Roger had lots and lots of movies lined up.”

Bev and Larry Schweighart from Tuscola

It wasn’t the movies that drew this couple to Ebertfest, but rather the arts and crafts sale that happens outside.

The annual sale, which takes place on the Saturday of Ebertfest (this year from 9 a.m. to 5 p.m.), showcases the artwork of community members with mental illnesses or disabilities.

Bev, who said she has osteoporosis and must use a wheelchair, and also has mental and emotional disabilities, has been selling her work at the sale for the past three years. These challenges have not stopped her from sharing her talent with the community.

“I like getting to see people and show my work and talk to them about it,” she said. “It gives people like me a chance to show their abilities.”

Her specialties are paintings and making blank notecards with details like scalloped edges, picture stamps and photographs she has taken.

Bev credits her husband Larry’s help for making her sale possible. Larry said he loves being Bev’s “chauffeur” and setting up her booth.

“He takes good care of me,” she said.

Despite dealing with a recent fracture in her back, Bev is looking forward to the sale, especially the fact that it was extended until 5 p.m. this year.

“I’ve made several friends, people that I didn’t know before, that have different disabilities than what I do,” she said. “We talk about our disabilities and how we work around them, and it’s really comfortable being there, and it’s exciting.”