Through the student lens: Four tumultuous years of Illini sports 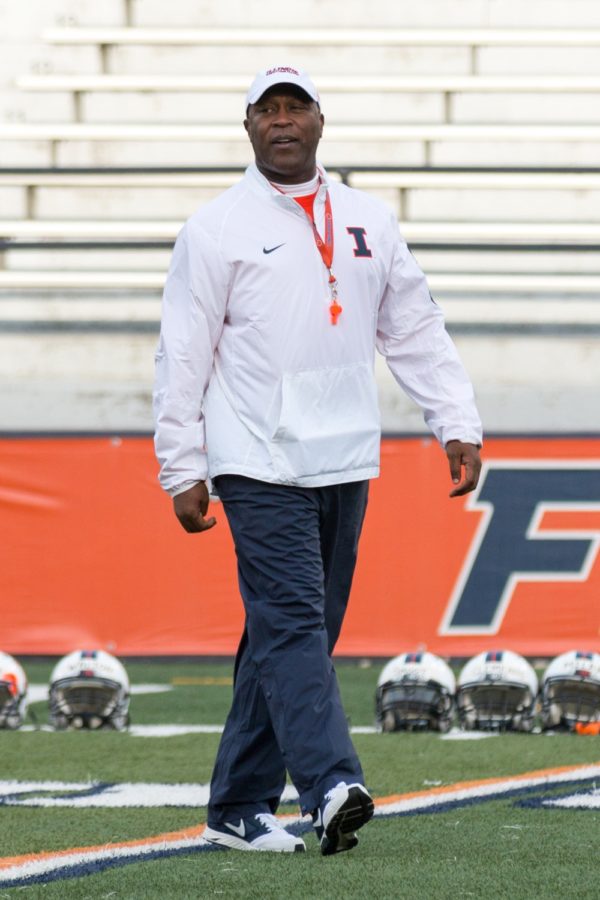 Lovie Smith supervises the first spring practice of the season on April 1st, 2016.

Looking back on it all makes it even harder to fathom.

I set foot on the University of Illinois campus as a freshman in August 2012, one year into Mike Thomas’ tenure as director of Illini athletics. Thomas had pledged his intention to compete for Big Ten titles in football and basketball under the direction his new hires, Tim Beckman and John Groce, both of whom had just hopped off the train from MAC-land.

What’s happened within the headline-snatching, revenue-generating Illini sports programs in the nearly four years since the class of 2016 checked into their dorms has been, quite frankly, insane. It’s been as if twenty years’ worth of athletic department turmoil were shoved into a car compactor and crammed into four.

Describing the last four years of Illinois athletics as “tumultuous” would be an understatement. But only noting the failures, embarrassments and Deadspin-worthy snafus during that period would be unfair as well.

The Illinois athletic department made enormous strides in marketing, fan engagement and facility upgrades under Thomas. If the renovated and glistening State Farm Center goes down as Thomas’ biggest achievement at Illinois, Grange Grove on the west side of Memorial Stadium will easily come in second.

I know it sounds crazy to even mention a party zone for college football fans in the same breath as a $160 million renovation on an AD’s resume, but re-visit the statement in ten years.

A facelift and naming rights for an aging basketball arena were inevitable at some point under any leadership, but uprooting big-money donors from their parking spots right next to the stadium might not have happened under a previous administration.

It’s kind of ironic, isn’t it? Thomas was rumored to have a chilly relationship with some of the deep-pocketed fat cats, and that actually might have benefited the majority of fans when it boiled down to certain business decisions.

Ten years down the road, when Grange Grove will have hosted ESPN College Game Day and a concert every summer and thousands of fans for seven fall Saturdays a season, we’ll all be glad that someone was sick of seeing so much green space go to waste in such a prime location.

Despite Thomas’ hires and their results being disastrous — and we’ll get to that in a moment — there’s no doubt that Illinois athletics was dragged into modernity under his watch. Four years ago, ticket stubs were still torn instead of scanned at sporting events, the resolution on scoreboards at venues throughout campus resembled an Atari video game and logos and uniforms used across the school’s 19 sports were a jumbled, inconsistent mess.

It feels like a 21st century college sports operation now.

The golf, gymnastics, baseball, tennis, track, wrestling, volleyball and soccer programs have seen results ranging from bursts of success to outright dominance in the last few years. It’s long past time for the results in the revenue sports to catch up.

The records speak for themselves. Thomas fired the incumbent football, men’s basketball and women’s basketball coaches upon his arrival, and the replacements he hired have gone 141-158 across their three sports. That is dreadful.

Beckman’s final mark before being fired in August 2015 was 12-25, Groce’s record stands at 77-61, and women’s basketball coach Matt Bollant is 52-72 through four seasons.

Students walking the graduation stage next weekend will have witnessed their alma mater participate in one (minor) bowl game appearance in football and two NCAA tournament games in their four years of undergrad.

That statistic alone explains why school spirit within the student body remains on life support. Not many Power Five schools have done worse in that time frame, and for an institution with the resources that a school like Illinois possesses, that is a criminally-low level of underachievement.

Fans deserve better. I hope the incoming crop of freshmen look back on fonder memories four years down the road.

There were also highlights that any college student would be extremely lucky to be a part of.

Groce’s program has given us a handful of other minor thrills, as well. I couldn’t feel my legs while storming the Assembly Hall court my freshman year, because a moment like knocking off No. 1 Indiana at the buzzer in 2013 meant riding a wave of euphoria that many kids never get to experience.

On the negative end of the spectrum, unfortunate headlines flooded in with an increasing frequency. Illinois athletics became more and more of a running joke to the rest of the sports world as the relative success of the 2000s faded farther into the distance.

It would have been comical if it wasn’t so real and depressing, with careers and livelihoods on the line.

Some of the bad press was outside anyone’s control. Devastating injuries showed no mercy to the football and men’s basketball programs, as they wiped out multiple seasons of competition for football’s Mikey Dudek and basketball’s Tracy Abrams while robbing others — quarterback Wes Lunt, hoops star Rayvonte Rice, as well as several key contributors on both squads — of significant portions of their respective seasons. Injuries essentially rendered Groce’s fourth season lost before it could truly get underway.

The avalanche of injuries to prominent Illini athletes these last several years was widespread and painful enough that I doubt we’ll ever see anything like it again in our lifetimes.

Perhaps the most notorious day of Illinois basketball in the Groce era came two and a half years ago, and it’s up for debate how much blame for the circumstances can be placed on his head. On November 15, 2013, Quentin Snider — Groce’s four-star point guard recruit — flipped his commitment from Illinois to Louisville.

Hours later, five-star center Cliff Alexander clowned Illinois by tossing an Illini hat aside and pulling a Kansas one over his head to announce his college choice on national TV.

Infamously-dubbed “Cliffmas,” that day was more than embarrassing for the program. Two potential cornerstones committing elsewhere helped throw the future of Illinois basketball under Groce off the rails.

After mostly sunshine and rainbows in his first season, Illini basketball has since largely been defined by injuries, disappointing results on the floor and a third of his roster getting arrested in the most recent calendar year.

Basketball is unquestionably the most popular sport at Illinois, but it was the failures of his football hire that was ultimately Thomas’ undoing.

It took the unprecedented social media revelations of former offensive lineman Simon Cvijanovic to uncover the scale of Beckman’s incompetence and mistreatment of players, ultimately forcing his unprecedented firing one week before the start of last football season.

After other mistreatment scandals emerged from the women’s basketball and soccer programs and the chancellor who hired him out of the picture, Thomas was rightfully fired by interim chancellor Barbara Wilson.

It was a move as shocking as it was encouraging for a football program that was neck-deep in its own grave. Lovie has a monumental task ahead of him, but I’ve witnessed more excitement surrounding Illini football in the last two months than I saw at any moment in the last four years.

So here we are.

To recap: there have been as many football coaches (three) and athletic directors (three) as combined bowl and NCAA tournament games (three) at Illinois in the last four years.

And the Illini went 1-2 in those games. Yikes.

It’s enough to make fans of other schools who might be reading this shake their heads in disbelief. You, the embattled Illini fan, probably only believe it because you endured it. And even then, the events of the last four years still might not seem totally real.

After everything, are football and men’s basketball–the front porch for Illinois athletics–in better shape than they were four years ago?

Considering the budding potential of the Lovie/Whitman combo and Groce being given one last chance with a capable roster to steer his ship away from the iceberg, I’d have to say yes.

Is Illinois athletics where it should be, four years after starting with a clean slate? Absolutely not.

Despite the underwhelming results on the field, I’ll always have one opinion about Illini athletics during my undergrad years: they were never boring. AR