Smith sets bar for present and future of Illinois football 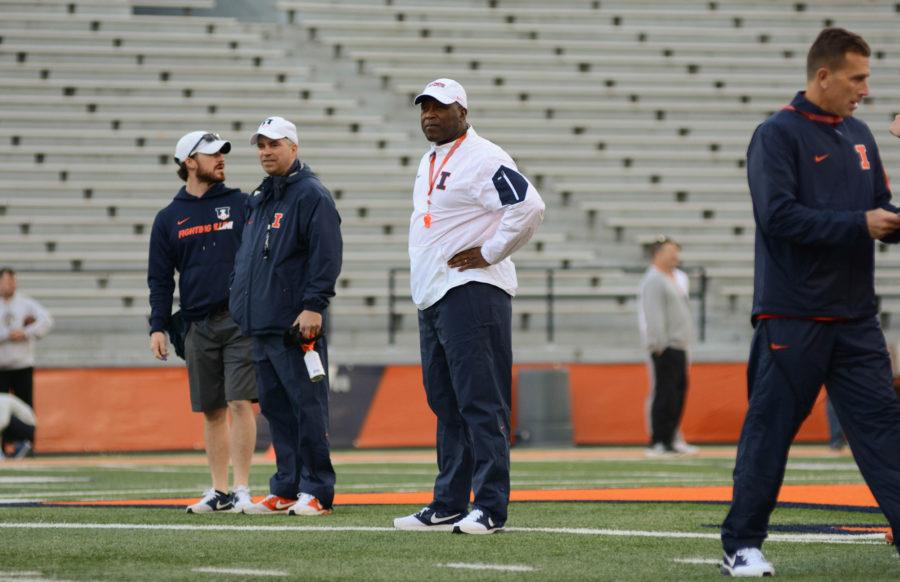 CHICAGO — Illinois football’s head coach Lovie Smith made his Big Ten Media Day debut Tuesday morning, speaking of his team almost as a startup, with brand recognition the focal point of the offseason.

“The past six months, I’ve had an opportunity to, of course, go across and spread our brand,” said the former NFL coach. “It’s an honor and a privilege to get a chance to be the head football coach for the University of Illinois. From my time up north, I had an opportunity to look at our university from afar and just kind of believing what it stood for — great academics and a lot of potential with our football team.”

Smith has faced a lot of questions regarding recruiting and whether or not he can bring in players from the big-talent pockets like Chicago. Smith said the biggest change is adjusting to how recruiting is really a year-round sport in the college game. But while his name may be getting him in the door with some, he went back to his business analogies to explain his recruiting strategies.

“I knew we had a good product,” Smith said. “So I knew we would be able to sell that. We’ve embraced recruiting as a year-long process. It has been nonstop. But again when you have a good product, you like talking about it.”

Selling the Illini hasn’t been too tall of a task for the former Bears coach: He said that there has been “full acceptance since day one,” in the locker room, with players buying in and looking to the coaching staff for direction.

Smith has been working with Illinois athletic director Josh Whitman to sell the Illini to fans who have watched the program’s tumultuous year from the stands.

But now, it’s about holding fan’s attention, and Whitman echoed Smith, when saying that the long-term goal will take time.

“I think our fans understand that you can’t build a football program overnight,” Whitman said. “Certainly Lovie brings a lot of credibility to the team, but there is a lot of work to do. This is not something that will be done with the snap of a finger.”

While the on-field product will take time to develop, Smith was blunt in describing his team and the future of the Illinois program in his time at the podium.

“We couldn’t be more excited to have an opportunity to play in the Big Ten, a conference that has some of the top teams competing for championships each year,” Smith said. “We’re not there yet. But in time, we would like to be a part of that conversation also.”