10 Reasons to go to Illinois vs. North Carolina 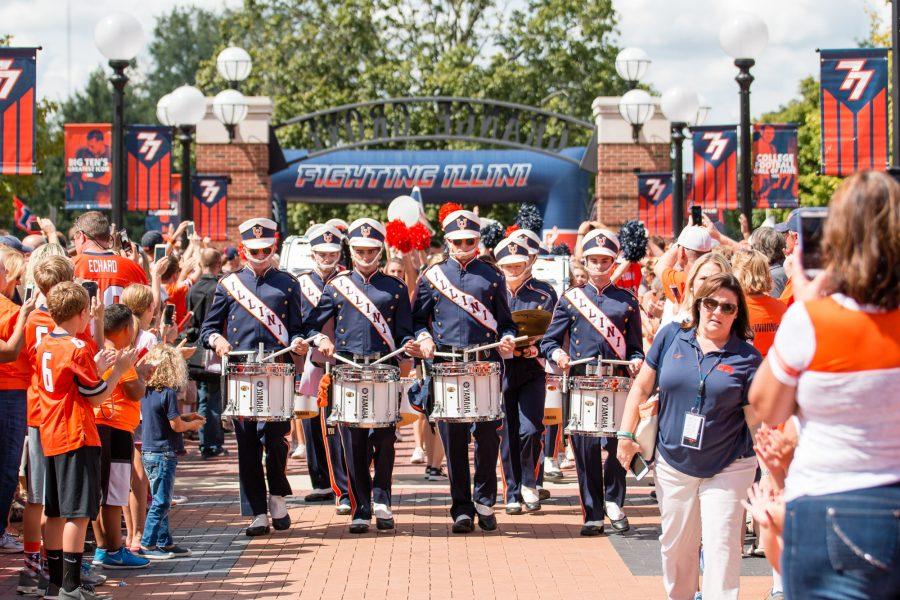 The drum line escorts the football team into Grange Grove before the game against Murray State at Memorial Stadium on Saturday, September 3.

Under the Memorial Stadium lights, the Illini will take on the North Carolina Tar Heels this Saturday.

I shouldn’t have to convince you to go to this game — it should be an absolute no-brainer. If you’re on the fence, here are ten solid reasons to go to Saturday’s game against North Carolina.

10. I heard that Illini AD Josh Whitman is wearing a bro tank to the game.

Look, this one came through the grapevine. Maybe what the young lady who told me meant to say was, “I hope that Josh Whitman wears a bro tank…” Either way, the possibility of this should be enticing. The man’s got some guns, my only fear is that security won’t let him in.

9. If the Illini win, Lovie might crack a smile.

Lovie’s riff on his own infamous words from his time in Chicago was a classic. It’s also a good reason to come out to this game. Lunt is a legitimate NFL-caliber quarterback, and he was a lot of fun to watch in Week One. He’s precise, consistent and reliable — those things don’t always sell tickets, but they do win football games. Lunt gives the Illini a chance to beat the Tar Heels.

7. This could be Illinois’ biggest victory since…

It’s difficult to recall many big wins in recent Illini history. While this game may not seem up to the level of either of these, Lovie’s first landmark victory against a worthy opponent would certainly give it some significance. This could legitimize the hype surrounding Coach Smith’s hiring. Or, as many of my colleagues on Illini Drive think, they could get their butts kicked. We’ll see.

6. You can spend any other day at Red Lion or at KAM’s — and many of you do — so why can’t you take a night off? Better yet, head out to celebrate after a big Illini victory. The bars will stay in business without you during the game, believe it or not.

I know that some of you are working hard to recapture the prestigious No. 1 party school ranking that we lost to Wisconsin. As much as I appreciate your long mornings, afternoons and nights at the bars, it’s time for a break. Crack a few cold ones at Grange Grove, and head over to the game.

5. On the flip side, there’s a bunch of you majoring in subjects I could never comprehend (anything in the sciences, math, engineering, stuff to do with computers), and you’re telling yourself that you’re going to study instead.

No, you’re not. Don’t lie to yourself. Honesty is the best policy, so forget the study plans, put on some orange and blue and get ready to see a heck of a football game.

4. Maybe you’ll see that special someone you’re oh-so-smitten with — and no, ladies, I don’t mean Wes Lunt.

There’s no better place to find love than at an Illini football game. There’s little Cupid arrows flying all over the place. And hey, you know what they say: eight out of 10 relationships that start at football games turn into happy marriages.

I can not speak to the validity of the statistic provided above.

“This Saturday should be (the) most electric atmosphere since (the) Rose Bowl season. We need EVERYONE to make it happen! No excuses…be in the house!”

2. You say that you’re going to clean your apartment or dorm room on Saturday night? Well, the best housekeeping show will be the Illini defense cleaning the clocks of the Tar Heel offense.

If you want to see the trash get taken out, stop by the stadium to see Dawaune Smoot and company wreck the Carolina offensive line.

1. Lastly, and most importantly, I really think Illinois is going to pull off the upset. I’m being serious, and I want to be held accountable to this lofty prediction. You heard it here, folks: Illinois 27, North Carolina 24.

If I’m wrong, I welcome all criticism, tomato-throwing, booing and the like. Game on, Illini nation.