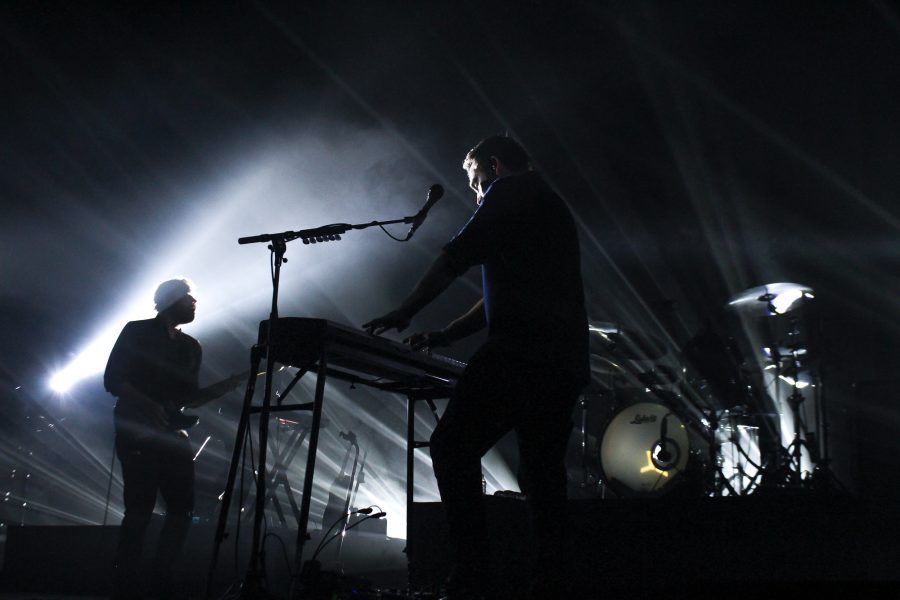 Frightened Rabbit performs for Pygmalion 2016 at Krannert Center for the Performing Arts on Thursday night.

Car Seat Headrest’s main songwriter and creator Will Toledo walked out alone and began strumming his guitar without preamble. He opened with “Way Down,” one of his newest songs, which hasn’t been released on any of the band’s 13 studio albums.

The simple chords and slow, almost mournful lyrics were accompanied well by two deep-blue backlights and a single spot on Toledo.

The rest of the band soon filtered in, adding the DIY, lo-fi sound Car Seat Headrest became known for — its name comes from the fact that Toledo recorded albums in the backseat of his car for privacy.

Most of the setlist came from Car Seat Headrest’s latest album “Teens in Denial,” which was released this past May.

Slow, meandering guitar solos would immediately shift to heavier sections with powerful drum and electric guitar, seemingly bringing the audience back to life.

Though most of the audience members were content to sit comfortably in their seats and bob their heads during the heavier sections, a few small groups jumped and head-banged in the outer aisles.

Even though the Tryon is a smaller venue, it wasn’t exactly conducive to Car Seat Headrest’s style, partially due to the audience not forming a standard pit and interacting more with the music.

For the majority of the set, Toledo opted to gaze down at his guitar or close his eyes. His stiff dancing and brown-gray suit were reminiscent of a boy at his first high school dance, and his actions fit perfectly with the band’s lyrics recalling insecurities and lost loves.

Conversation with the audience was also limited, though that could have been due to the time limitations of a 45-minute set. The band generally focused on engaging the audience with its music rather than any sort of “How are you guys doing tonight?” banter.

For the band’s final song, Toledo looked up to the audience and introduced the track as “a short one, but true” and began to play “Stop Smoking,” a fan favorite from the 2011 album “Twin Fantasy.”

The only lyrics are “Stop smoking, we love you, and we don’t want you to die.” The song’s simplicity and raw emotion are a fitting comparison to Car Seat Headrest itself.

After a 30-minute intermission, the Scottish five-piece Frightened Rabbit kicked off their set with “Get Out,” a single from their most recent album “Painting of a Panic Attack.”

Where Car Seat Headrest’s lighting had been gentle, overhead primary colors, Frightened Rabbit was silhouetted from behind by bright, strobing white lights.

Frontman Scott Hutchison chose the bands name based on his mother’s childhood nickname for him due to his shyness, which he’s clearly grown out of. On stage, he chatted with the audience in a fairly thick brogue, giving a shoutout to Blue Waters Supercomputer — “I don’t know what it does, but it looks cool.”

Frightened Rabbit’s guitar-heavy instrumentals had Hutchison jumping around the stage and repeatedly wiping sweat from his face. The band’s energy was impressive considering that they had participated in the Pygmalion Bike Race earlier in the day.

The turnout was only slightly higher than Car Seat Headrest’s, but the audience was much more active. When Hutchison asked if the audience was all University students, someone yelled “F— school!”

Hutchison laughed and called the man a troublemaker, but the mildly rebellious attitude spread through the audience as the set progressed.

A group of five on the right side of the theater decided to move to the front center, emboldening about half of the audience to come down and form a pit half an hour into the show. When the song and accompanying light show ended, Hutchison seemed slightly shocked to see the crowd had formed.

Though the band’s more polished sound differed from Car Seat Headrest, its lyrics were equally emotional. The audience was encouraged to clap along, and would occasionally begin on their own.

There was no encore to the band’s 75-minute set, but the audience seemed to leave satisfied after it was led in a hymnal chorus of “ooh’s” and claps before Frightened Rabbit waved its goodbyes.