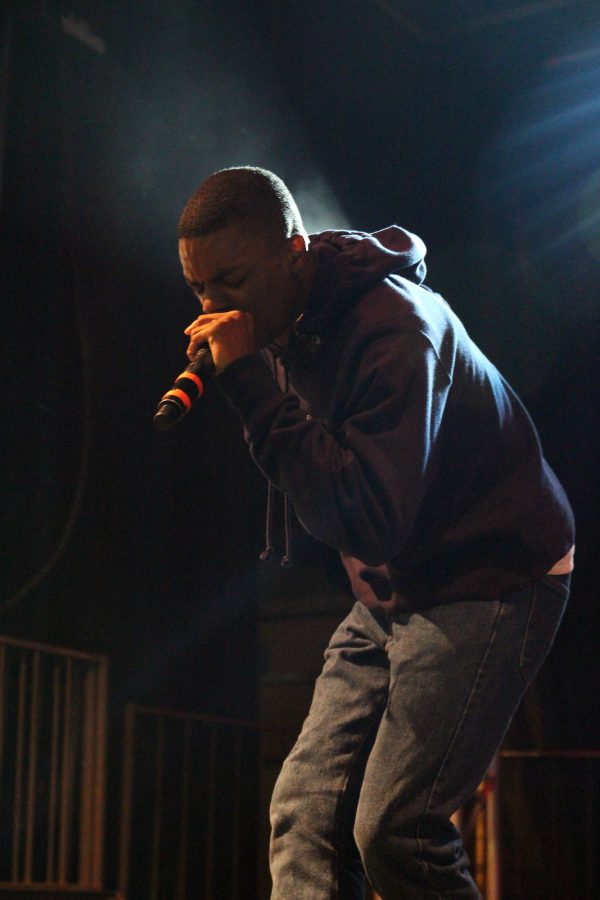 Vince Staples gives a high-energy performance at the Accord during the Pygmalion Festival on Friday, September 23, 2106.

It was evident during his headlining performance Friday night at The Accord for the 12th annual Pygmalion Festival. He doesn’t breathe when he performs — his words just seem to be delivered out through him, viciously gliding through the instrumentals his DJ, Westside Ty, plays.

It takes a bit to realize how exact and concentrated Staples is in executing all of his songs. At first, it just seems that he is just a solid performer, really immersing himself in his music. You could tell on his brooding opener, “Lift Me Up,” where it seemed that he didn’t even face the crowd until the chorus. Instead he was looking up, moving side to side on stage, actions as restless and kinetic as his music.

Then you realize just how hard Staples is going. Not the raucous, all over the place type of “hard,” but a consistent, gritty delivery over some instrumentals that would drown out or dominate the show for a lesser rapper. This was evident in his performance of “Blue Suede,” an absolute monster of a beat complete with piercing synths and a muddy, stage-rattling bass.

Yet, Staples just took over, riding that juggernaut of a beat effortlessly.

It helps that Staples doesn’t seem to run out of energy. The same can’t be said for the whole Pygmalion crowd, though there was a good cluster of regular mosh-pits in the front center, bouncing to the MC’s every request.

The overall turnout was a still a little less than expected or preferred, especially for a rapper who is starting to become a festival choice-select — he played Chicago’s Lollapalooza, New York’s Governor’s Ball and London’s Wireless Festival this year before coming to Champaign.

Cuts from his LP “Summertime ‘06” and his latest EP “Prima Donna” built the bulk of his roughly 50-minute set. Other singles, such as his performance of Major Lazer’s remix of “Ghost” translated well to the mainly college-aged crowd.

Banter wasn’t common for Staples, as his only real substantial breaks in between songs came during an impasse and technical issue with the sound guy. Staples started to talk to Westside Ty about staying current with the time of the performance.

“Let’s do a song dedicated to current events, that’s what they call it in high school,” Staples said. “Good cops, bad cops.”

Staples has a welcome flash of humor that definitely never comes through in his music. It’s a stark contrast from his driving, police-centric track “Hands Up” which immediately followed the little break.

“Raidin’ homes without a warrant, shoot him first without a warning/And they expect respect and non-violence, I refuse the right to be silent,” Staples raps in the song.

Staples can rap. It was evident throughout the whole performance that he executed with precision, though Staples does often say in interviews that he treats his music and performances as just “his job.”

It might be that driven mindset that results in the almost flawless way Staples attacks his set. It also might just be that he is a superhuman rapper who just doesn’t need to breathe.

I think it might be a little bit of both.