Nine offenders who have been identified as being at risk of either partaking or perpetrating gun violence were offered a fresh start on Thursday as part of a new program called CU Fresh Start. 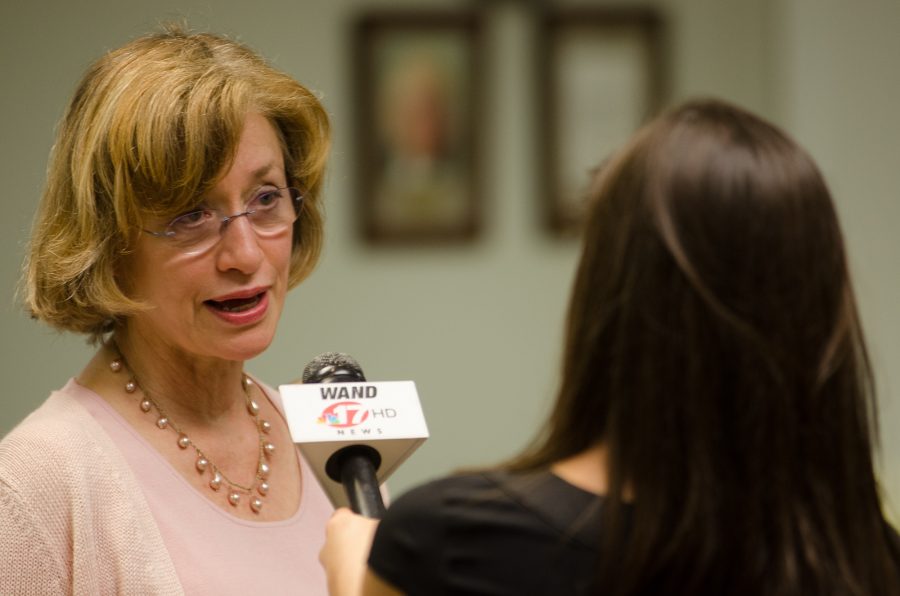 Mayor Laurel Prussing of Urbana is interviewed by media at Brookens Adminstrative Center Tuesday night. Mayor Prussing won the mayoral election and will serve another four years in office.

There have been 84 shooting incidents in Champaign-Urbana since Jan. 1.

Community leaders say they’ve had enough of the gun violence and are now taking a targeted approach to eliminate it.

Nine offenders identified as being at risk of either partaking in or perpetrating gun violence were offered another chance on Thursday as part of a new program called CU Fresh Start.

“Our community is facing an epidemic of gun violence,” said Urbana Chief of Police Patrick Connolly. “The goal of the initiative is relatively simple – stop the shooting.”

Representatives from Champaign and Urbana brought in the offenders for a call-in where they spoke to them and encouraged them to put down their guns.

“The cycle of gun violence has to stop now,” said Champaign Mayor Deborah Feinen, who was the second speaker at the call-in. “You are shooting at the community and we won’t tolerate it any longer.”

Feinen said that it is not uncommon in this community to know not only those who were shot, but also the shooters.

If the offenders choose to take part in the program, they will be offered help and resources from the community.

“We recognize that we can’t arrest our way out of this problem,” said Champaign County Sheriff Dan Walsh.

However, if they decline the offer and continue to engage in gun violence, they will face consequences such as possible incarceration.

Tracy Parsons, community coalition facilitator, said the program is based on a similar one in Peoria. He said this is the first time Champaign-Urbana has had a program like this, but that “it’s important and critical.”

In order to partake in the program, the offenders must be at least 18-years-old, on parole or probation and have a prior history of involvement with gun violence. Parsons said the current goal is to have a call-in four times a year. For those offenders who are chosen, participation in the call-in is mandatory as part of their parole agreement.

“You are hand picked to be here, and it’s not by accident,” said Champaign Chief of Police Anthony Cobb. “You are more than likely to be a shooter, or worse yet, to be shot.”

Champaign County State’s Attorney Julia Rietz then addressed the offenders. She asked them to look around the room at the numerous photos of incarcerated people that were posted. She said that all of the people who were pictured were put away during her 12 years as the District Attorney.

“The past 12 years have been really difficult because we’ve had so much gun violence,” she said.

Patrick Hansen from the United States Attorney’s Office told the offenders that he wanted them to remember and think that “If I pick up a gun, something bad is gonna happen.”

“Anytime you pick up a gun, you’ve committed a crime,” he said.

After the representatives for law enforcement spoke to the offenders, community members who were identified as “Community Impact Voices” addressed them.

The first to speak was Rodney Williams, a community member who was previously incarcerated. He urged the offenders to take advantage of the resources that were being offered by CU Fresh Start.

Rodney’s brother, Seon Williams was also a speaker at the event. Seon also pleaded with the offenders to accept the help they were being offered.

“It saddens me because I know you guys, you’ve been in my barbershop,” he said. “The reality is once you pull that trigger and murder someone, you can’t wake them up anymore.”

Michael DeArmond, whose daughter was killed on the Fourth of July in 2012, while he was still in prison, said they “can do something better than pulling out these guns.”

“We’re sitting in this room tonight and all of us look alike and I’m hurt because we’re killing each other for nothing,” said Reverend Rickey Parks, pastor of Pilgrim Missionary Baptist Church. “When are we gonna stop killing each other?”

DeArmond and Parks encouraged the offenders to not only think about the impact of their actions on themselves, but also on their families, friends and community.

CU Fresh Start Community Liaison Donté Lotts, who has known some of the offenders at the call-in for years, said he would personally help them get away from the gun violence.

“I’m here to empower each and every one of you because you showed up,” he said. “It’s time for you guys to change.”

“Please consider the offers of help, we will do our best to help you,” Urbana Mayor Laurel Prussing said.

There are many possibilities, Lotts said, such as going back to school and getting a job. But they have to take the first step — to put down the guns.