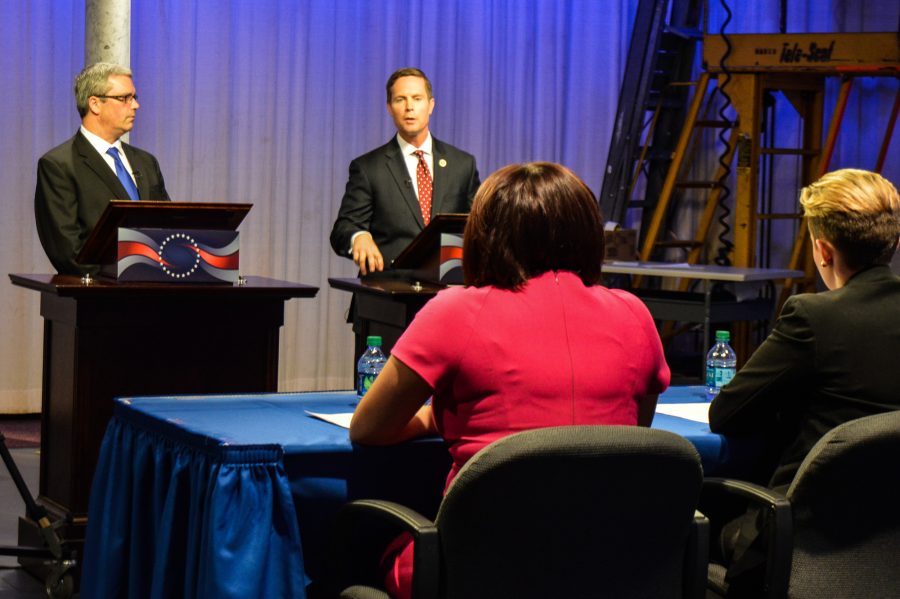 Democrat Mark Wicklund and Republican Rodney Davis respond to questions from moderators at the Illinois 13th Congressional District Debate Thursday night at the WILL-TV studio on the University of Illinois campus.

Unlike the 2016 Presidential Debate last Sunday night, Rodney Davis and Mark Wicklund remained remarkably civil and even friendly Thursday at the 13th Congressional Debate in Urbana.

WILL, an NPR affiliate, hosted the debate in the Richmond Studio location at the University. Niala Boodhoo, host of WILL-AM 580’s The 21st show, moderated the debate. She was accompanied by an all-female panel of Illinois political reporters Amanda Vinicky, Jamey Dunn and Jordan Abudayyeh.

NPR Illinois in Springfield, the NAACP of Champaign County and the League of Women Voters sponsored the debate.

The 13th Congressional district is one of the largest in Illinois. Stretching from Champaign-Urbana to the Mississippi River, the district includes suburbs of St. Louis as well as both the University of Illinois and Illinois State University.

Vinicky started off the debate by asking both candidates to respond to controversy surrounding their support for their political party’s presidential nominee. Davis recently rescinded his endorsement of Trump after the release of Trump’s comments about women in 2005. He also recently asked to be removed from Trump’s Agricultural Advisory committee.

“It’s a decision my wife and I made across the kitchen counter when we heard the recent comments,” Davis said noting the influence of his three teenaged children. “What we heard was something that I don’t think should be heard from anyone, let alone candidates running for the president of the United States.”

Davis noted this is his first presidential race as a congressman and doesn’t know if he would look forward to the next one. He is not in support of either candidate, as Clinton’s role in the Benghazi controversy disqualified her of his support.

“I don’t care if you’re a Democrat like her or a Republican,” Davis said. “You are not fit to be Commander in Chief if you make decisions like that.”

Wicklund praised Davis for rescinding his endorsement of Trump but wished he would have done so earlier based on previous comments.

When asked about Clinton’s ongoing email scandal, Wicklund said he stands by the FBI’s investigation into the subject. The FBI recommended no charges be filed against her. However, he did consider her irresponsible.

“That’s basic ethics 101 when you’re running for office whether it’s county board level or not,” Wicklund said. “She should have known to separate her email accounts and keep them that way.”

As the district is home to several notable colleges, both candidates railed against student loan debt. Vinicky noted one in four student loan borrowers are either late or have defaulted on their debts.

As a parent of students having gone through the college system, Wicklund said the situation has gotten out of hand. Interest rate loans should equal the cost of covering school programs, he said. Wicklund also railed against high salaries of both current and former university administrators.

“If they’re fired or terminated, the settlement that agreed to with these university leaders is astronomical,” Wicklund said.

Davis called student loans the next bubble in the nation. Having introduced the Employer Participation in Student Loan Assistance Act to Congress, he championed his work in encouraging companies to pay back student loans on a tax-free basis.

As racial tensions continue to escalate in the nation, Dunn directly asked both candidates if they had met with Black Lives Matter activists. Wicklund said he had, while Davis said he was willing to meet with leaders.

Davis said he has met with numerous leaders of all communities in his district. Aside from supporting body cameras for police officers, he encouraged students to get to know their police chiefs and other local officials.

“It is a tragedy that there is a tremendous lack of communication within these communities that lead to the tragedies that we’ve seen,” Davis said.

Having grown up in the inner-city of Decatur, Wicklund praised the work he has done with the city’s black community. He is against Trump’s recent support of search and seizure protocols, he said. Instead, Wicklund wants more officers on the streets.

“Law enforcement needs to have a stronger presence within inside their communities on the street, inside their schools, and in the churches where they can relate to what’s going on,” Wicklund said.

Both candidates chastised Black Lives Matter activists for attacking law enforcement officials. They also both spoke of their support for criminal justice reform.

“It’s tragic that we see petty drug offenders spending more time in prison because they don’t give prosecutors the information they think they should give, than Jared, the Subway guy who’s a pedophile,” Davis said.